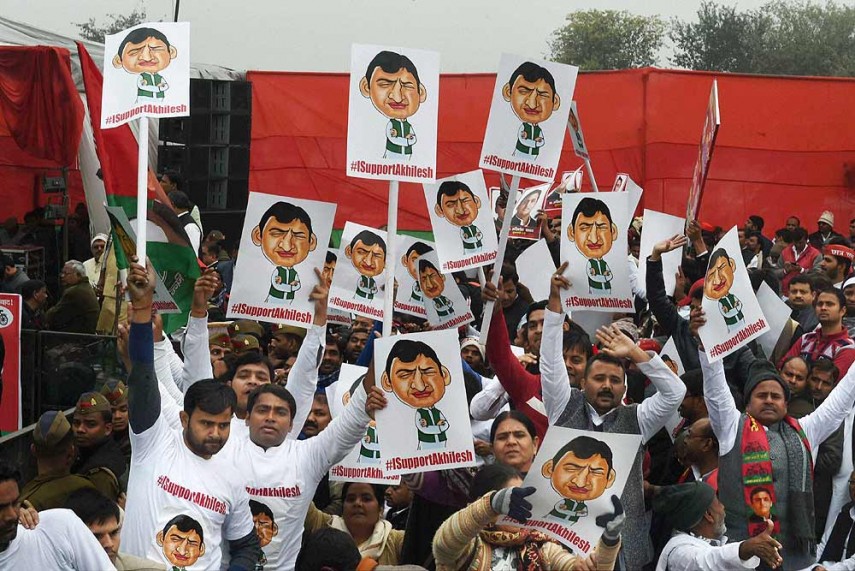 The ruling Samajwadi Party split with Chief Minister Akhilesh Yadav being anointed the party president upstaging his father Mulayam Singh Yadav, who yet again expelled Ram Gopal Yadav from the party for six years and termed as illegal all decisions taken at a national convention convened by him on Sunday.

To complete the takeover, Akhilesh Yadav's faction is likely to stake claim to the party's election symbol.

The Sunday’s national convention also proposed the expulsion of "outsider" Amar Singh and removal of Shivpal Singh Yadav from the post of SP's UP chief.

Stung by these "decisions", Mulayam struck back, issuing a hard-hitting letter that said the national convention was convened without the permission of the national president and so all decision taken there are illegal.

"The parliamentary board of the party declares all the proposals, decisions and the convention itself illegal and expels Ram Gopal, who convened the convention, for six years," the letter stated.

The bitter power struggle hit a new low with Mulayam also convening a national convention of the party on January 5 at the same venue here to show people as to who had more clout in the party.

Crisis refused to die down in the party as Akhilesh was "unanimously" crowned the SP national president at the convention a day after over 200 of the 229 party MLAs met him at his residence here at a show of strength which left his father's camp with barely 20 MLAs.

The proposal to make Akhilesh SP chief was welcomed by a huge applause by party cadres gathered at the sprawling Janeshwar Misra Park raising their hands.

Ram Gopal also moved a proposal to make Mulayam Singh, the founder president of the party, as party patron and removing Shivpal Yadav from the state unit post.

Although Mulayam warned that participation in the convention will be taken as indiscipline and action will be initiated against those attending it, almost all the senior leaders who had been longtime associates of Mulayam shared the dais with Ram Gopal and Akhilesh.

Soon after being proposed as the national president of the party, Akhilesh said his respect for his father was more than ever and that he would stand against those conspiring against the party.

"...People might raise questions and level allegations but I said this before and say it again that as his son if there is any conspiracy against the party and him it is my duty to stand against them," he said.

"I had said that I was ready to step down as state unit president earlier too... He had made me the CM and gave me a chance to work...," he said.

The convention also authorised Akhilesh to constitute a

national executive, parliamentary board and various state units, as required, and inform the Election Commission of the developments at the earliest.

The fresh developments have almost left both Mulayam and younger brother Shivpal isolated in the party.

Soon after he was made the national president, Akhilesh said, "I had stated that I was ready to step down as the state unit president earlier too, but one person brought the typewriter at Netaji's home and got the letter of my removal from the post typed."

The chief minister said, "All want that SP comes back to power but there are some who do not want this...Netaji would be most elated if the party forms the next government...I have been given the responsibility to make the next government on one more time.

"Netaji's respect and position is supreme for us...These three-four months are very important....Don't know who all can come together and force certain decisions," Akhilesh said.

In his address at the convention, Ram Gopal said that all are aware that the government was working well but two persons conspired and got Akhilesh removed from the state president's post and posed a big problem in the party.

Blaming Shivpal Yadav for working in an arbitrary manner, he said that tickets were being given to those who are not even members of the party.

"The state unit president gave tickets to those who were not even member of the party...Despite directives from the national president, the state unit president revoked the suspension of those shown the door...It is clear that some people do no want SP to return to power and Akhilesh to become the chief minister again," he said.

When the problems became insurmountable the party workers gave him a request in writing to convene an emergency convention and he waited for two months before convening today's meeting, Akhilesh said.

Making a dramatic U-turn yesterday, SP revoked the expulsion of Akhilesh and Ramgopal Yadav after a massive show of strength by the chief minister who convened a meeting of SP legislators where over 200 of the 229 party MLAs turned up expressing their loyalty.

Reacting to the developments, senior SP leader and MP, Naresh Agrawal said, "When lakhs of people have chosen Akhilesh as the party president, then who has the right to remove anyone.

"Netaji is our leader, we all respect him. I would like to tell Netaji that if your son is moving forward and is making you proud, then you should shun your relations with the people who are trying to break your family and because of whom there is a feud within the party. If Netaji still doesn't pay heed to the public opinion, then it is unfortunate," he said.