Any visitor to Delhi from a fresh air situation knows 40 kilometres away that he is nearing the metropolis by the sweetly sick smell of sewage that clings to the air. 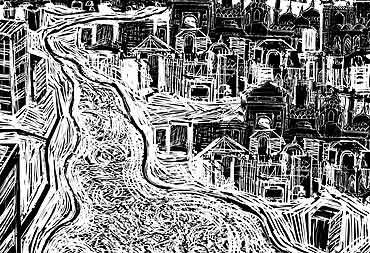 If you buy from the Survey of India in Janpath their antique map showing the first John Company rendering of Delhi’s layout, the one feature that has remained the same for two centuries is the city’s drainage pattern. The Najafgarh Drain once formed a protective moat and, including feeders originating from the Ridge, it describes three quarters of a circle before debouching at Wazirabad Barrage. One feeder skirting the Cantt is Ganda Nala which achieves some respectability after Janakpuri under the name of Palam Drain.

Any visitor to Delhi from a fresh air situation knows 40 kilometres away that he is nearing the metropolis by the sweetly sick smell of sewage that clings to the air. For the poor, stewing in your own juice is understandable but Delhi’s rich who live in posh areas remain studiously indifferent to the waftings from the open drains that pollute the air of their colonies. Perhaps because of the poor image given to foreign missions, the drain that rises behind Rashtrapati Bhavan is covered in the Chanakya-puri section. Met by a drain originating on the JNU campus this VIP nala turns east at Sarojini Nagar, is covered again (by Dilli Haat) and joins Khushak Nala near the Defence Colony flyover.

Follow the lie of South Delhi’s drains and the contrast between wealthy buildings and the refusal of their owners to acknowledge the existence of nalas is palpable. The (in)famous dividing drain of Defence Colony rises in Sainik Farms and flows past upmarket colonies like Soami Nagar, Panchsheel and GK-I. To prove the hollowness of the mantra that "citizens need more education" is the fact that a parallel drain rising opposite Zamrudpur encloses on two sides Lady Shri Ram College, the Teachers Training Institute and the Vocational College. This latter drain cuts through Lajpat Nagar and, in spite of the flashy showrooms on Veer Savarkar Marg, no one invests a glance on the filth that clogs it. Mohenjodaro 3,000 years ago understood better the sanitary imperative than today’s Delhi.

Tourist maps both by the Survey and Eicher leave out the drains and who can blame them ? Those cartographers who still depict Delhi’s nalas continue to use blue instead of the reality of ordurous grey or faecal khaki. Optimistically, in an age of throwaway plastic, they insert arrows to indicate the direction of flow. The smell of sullage is malodorously the same whether from rich or poor backyards, or from believer or atheist backsides. A serious contender for the award of Best Drained Colony must be Dilshad Garden which has nalas on all four sides. Rivalling it is the Pusa Institute.