NBC News interview with the US secretary of state, Washington, DC, April 11, 2003 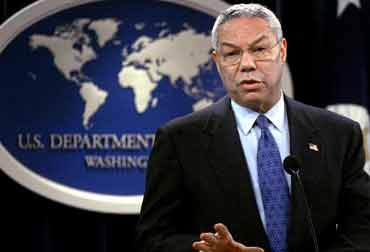 Colin Powell: Remember, there are institutions in Iraq. What we have to do is purge them of Saddam Hussein's cronies and Baath Party leaders and make sure we get rid of all the cancer. But this is a country with bureaucracies, with institutions that I think we can build on. It's not just starting from scratch.

Tom Brokaw: If Ahmed Chalabi, who is the chairman of the Iraqi National Congress, the principal exile group, and a favorite of the Defense Department, is elected chair of the Iraqi interim authority, will that please you?

Colin Powell: It's up to the Iraqis to decide who will be their leaders. Mr. Chalabi is well known. He has struggled. He has put his heart and soul into this fight for many, many, many years.

Tom Brokaw: But you don't mean to suggest that the United States won't have real influence on how that is formed?

Colin Powell: Of course we will have some influence on how this is formed.

Tom Brokaw: Will the United Nations play a role in determining how that interim authority is organized and conducts itself?

Colin Powell: As the President said in his remarks in Belfast, Northern Ireland, not too long ago when he met with Prime Minister Blair, the United Nations has a vital role to play, principally humanitarian activities.

Tom Brokaw: But does vital role also mean peacekeeping troops and, in some codified form, a voice in the political organization of Iraq?

Colin Powell: We have sent out requests to countries around the world to see what they would be interested in contributing, and General Franks and his team are now looking at what the need might be. And the UN might well have a role to play in that.

But clearly, I believe that those nations that paid the political price and the price in blood and the price in treasure in order to create these circumstances where a new government, a new democratic government, can be created, I think we have an important leading role to play in the structure of this.

Tom Brokaw: It sounds like you're saying, Mr. Secretary, to the United Nations, "Speak up, but we're not required to pay attention."

Tom Brokaw: James Woolsey, who used to be the head of the CIA, is now an informal advisor to the Defense Department, said the other day that we are in a world war.

Is that a fair assessment of the state of war that exists around the world led by the United States?

Colin Powell: The war that the President focuses on and the war that's uppermost in his mind is the global campaign against terrorism. The President has been clear about this.

This does not mean that we are looking for another place to invade. The President has many tools at his disposal -- political, economic, diplomatic and military and intelligence and law enforcement and the power of persuasion -- and now a new tool, the power of example. And that example will be Iraq.

(Transcript courtesy: US Department of State)

Their Man In Baghdad