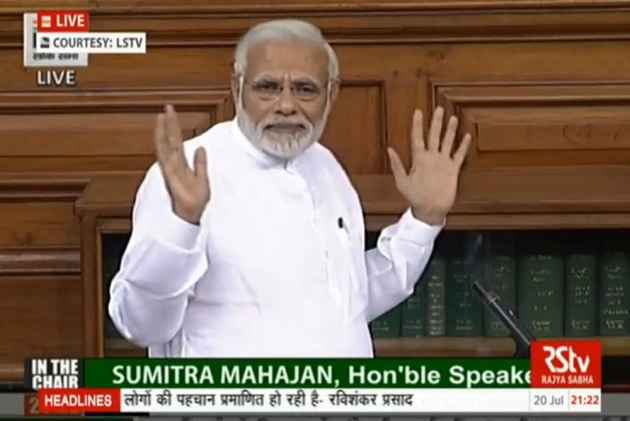 After the Narendra Modi-led NDA Government secured a massive victory in the No-Confidence Motion in the Lok Sabha on Friday, Congress leader Shashi Tharoor attempted to downplay the defeat by saying the result was predictable.

Tharoor said, "Basic message is that the journey is more important than the destination. Failures of the BJP government were put before the nation. The outcome was predictable but the process was successful."

"The threat to the Modi government from Rahul Gandhi and other opposition leaders was evident through the Prime Minister's speech that reflected his insecurity," he said.

He said, "For him (PM) to say that we are doing something for political gain it is ridiculous. He is tying up with our rivals while he is still in alliance with us and trying to weaken by starving our state (Andhra Pradesh) of funds."

Terming the speech of Prime Minister Narendra Modi as "Dramebaazi", Congress senior leader Mallikarjun Kharge said, "We posed questions to PM Modi on Rafael deal, Nirav Modi etc but he didn't answer any. His speech was 'dramebaazi.' He didn't say anything for people of Andhra Pradesh. He was telling us what previous governments have done and not what his government has done in four years."

TDP MP K Srinivas dubbed the defeat of the Opposition a `moral victory`. He said, "It is not about majority, it is about morality. Morality won today. We wanted to showcase the failures of PM and his govt. You take unemployment, farmers distress, economic slowdown and more. He has failed in every aspect and lost the trust of people of the country."

Congress' Jyotiraditya Scindia remarked, "The Prime Minister in his two-hour speech didn't address any of the woes of the common man. What BJP says and what it does is a difference between the reality and what they try and conjure up. That is the signal that has gone out."

The BJP which had a secured a smooth victory said this is a precursor to Congress' loss in the 2019 elections, in the words of Union Minister Smriti Irani.

She said, "Defeat of Congress and opposition is a precursor to their defeat in 2019 It also gives the public at large a sense of how scattered opposition is & has given citizens a look into what kind of strategy Congress is willing to embrace that there is instability in the country."

Meanwhile, Union Minister MJ Akbar said, "PM Modi answered each and every question that was posed to him. He literally shattered the Congress."

Taking a dig at Congress President Rahul Gandhi's unexpected hug to the Prime Minister in the Parliament, Union Minister Jitender Singh remarked, "Rahul Gandhi's hug to PM Modi has done him more harm than good. What he did was also against the parliamentary decorum."

Union Minister Ravi Shankar Prasad, on the other hand, said that the result in Parliament is the reflection of people's trust in the Modi-led government. He stated, "The numbers have increased because the trust of people has also grown in the Modi Government."

Earlier in the day, the Modi-led NDA Government sailed through its first floor test in Lok Sabha by defeating the No-Confidence Motion moved by Telugu Desam Party (TDP).