Ganga (135) and Sarwan (116) stitched together 205 runs for the second wicket to set the tone for a mammoth total before the Indians pulled things back somewhat. 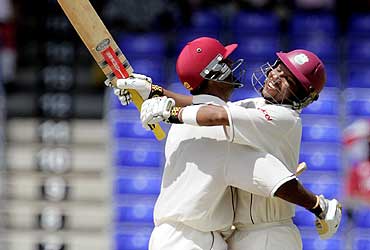 Centuries from Daren Ganga and Ramnaresh Sarwan set the tone for a mammoth West Indian total before the Indians fought back through some disciplined bowling on yet another rain-hit day in the third Test today.

The hosts were cruising at 420 for five in the first innings at tea when thunderstorms washed out the remainder of the second day's play at the Warner Park stadium.

Shivnarine Chanderpaul (24) and Marlon Samuels (eight) were at the crease when play was called off.

The West Indies owed their total to a double century partnership between Ganga and Sarwan who made the most of a benign track to collar the Indian attack.

Ganga, 64 overnight, registered his third Test century with a sedate 135 that consumed 294 balls and included 15 fours.

Sarwan, celebrating his 26th birthday, was more enterprising in cracking his ninth career hundred, a 174-ball 116 filled with 17 fours and a six.

Munaf Patel (3-120) led the Indian fightback through two quick dismissals, of Ganga and Brian Lara, towards lunch while Sreesanth and Harbhajan Singh picked a wicket each in the second session.

Sreesanth dimissed Sarwan who could add only three runs to his score after lunch and Harbhajan picked his bunny Dwayne Bravo to stem the flow of runs.

Ganga and Sarwan put on 205 runs for the second wicket in the two and half hours of morning session when the hosts added 155 runs.

Ganga, playing his 37th match, recorded his third and the highest-ever score in Tests before he played on a Patel delivery.

Sarwan enjoyed a particularly riveting moment of batting artistry when he slammed Patel for six fours in an over.

It was the fourth over with the second new ball, Patel's 19th of the innings, when Sarwan unleashed some classical drives and cuts against the gangling Indian bowler.

Sarwan, unbeaten on 77 when the over started, jumped to 99 by the time it was closed, the 25 runs from the over including a no-ball.

It was only the third time when a batsman had slammed six fours in an over in a Test match.

Sandeep Patil did it against Bob Willis in Manchester in 1982 and Chris Gayle thrashed Matthew Hoggard of England at the Oval during the 2004 series.

Ganga, unbeaten on 64 on Thursday, was the first to reach his hundred when he square cut Patel to the cover boundary.

Sarwan reached his mark quicker when he flicked Sreesanth for a single to fine leg, having batted for just over three hours and hit 16 fours from 186 balls.

The hosts, sitting pretty at 362 for 3 at lunch, added only 58 runs in the two hours from the afternoon's play.

Sarwan departed when he fell leg before wicket to a full-pitched delivery from Sreesanth.

The dismissal of Bravo (21) was a great relief for Harbhajan as the batsman attempted a steer off him and succeeded only in edging it to wicketkeeper Mahendra Singh Dhoni.