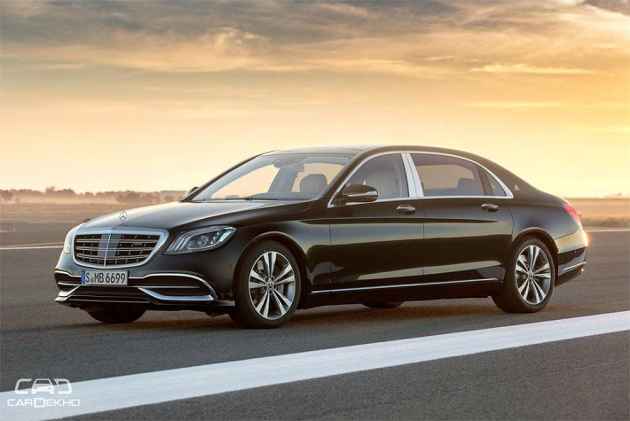 The Mercedes-Maybach has been launched in India at a starting price of Rs 1.94 crore to Rs 2.73 crores (ex-showroom). Introduced at the ongoing Auto Expo 2018, the luxury saloon is offered in two variant- the starting S560 and the top-spec S650. Various design elements of the S 650, for instance its headlamp design, are based on the new S-Class.

Under the bonnet of the Maybach S 650 is a twin-turbo 6.0-litre V12 petrol engine which pumps out massive power of 629PS and a huge torque figure of 1001Nm. With those figures the Maybach S 650 becomes the most powerful Merc to grace Indian roads yet. The limousine gets a 7-speed automatic gearbox and has rear-wheel drive.

Based on the S-Class facelift, the S 650 gets an updated front fascia with large air intakes and chromed radiator grille. The grille is flanked by new LED headlamps with 'Ultra Range High Beam' which simply means adaptive headlight that better illuminate the road ahead. The rear too has been reworked; it now gets new tail lamps and a redesigned bumper. The ‘Maybach’ badging on the C-pillars and wheels makes it that much special.

In the size department , the S 650 continues to carry the same measurements as its predecessor, albeit with a millimetre rise in its width. Its length and wheelbase continues to stand at 5453mm and 3365mm respectively. The 19-inch alloy wheels of the S 600 has been swapped with larger 20-inchers in the S 650.

The cabin of the S 650 is more premium, in fact the company claims it is the quietest rear cabin in the world. And of course it has to be -- after all it’s a Maybach, right? The dashboard gets a 12.3-inch high-resolution instrument display and  faux wood inserts while Nappa leather wraps the seats and armrests. It also gets powered executive seats. Not to mention the Mercedes Maybach S650 is available with a plethora of customisation options.