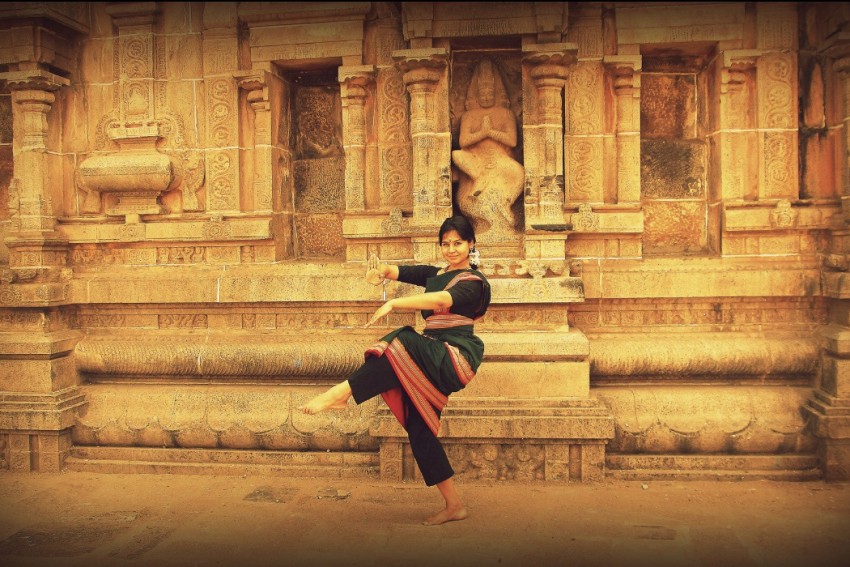 Ranjini Nair strikes a pose in front of the Thillai Nataraja Temple in Chidambaram, Tamil Nadu.
Rajini Nair/Facebook
Arshia Dhar 2018-12-24T12:22:09+05:30 Meet A 25-Year-Old Who Is Changing Lives Through Her Dance 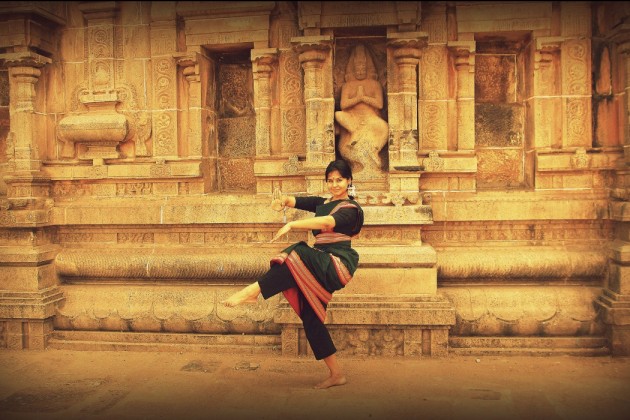 Growing up in an urban Indian household has often meant spending the evenings after school learning a dance form or sharpening one’s musical genes. Ranjini Nair’s life was no different. The Delhi-based, 25-year-old Kuchipudi dancer was inducted into her first dance class at the young age of eight, only so that she wouldn’t “lie in front of the TV all day” and would keep her limbs from rusting, according to her father.

“I thought on the first day I had gone for a Bharatanatyam class,” Nair breaks into an amused laugh as she revisits the memory. As we occupied her room inside a sprawling government quarter in Chanakyapuri, invading a space full of books and artistic trinkets with our cameras and tripods, Nair went about getting ready for a performance as she struggled to tie her golden waist-belt. “I don’t know why this won’t stay in place,” she laughed.

For someone in anticipation of a public appearance, Nair was unusually calm and in cheerful disposition. “My day has actually shifted a little bit since August after I started my masters in performance practice at Ambedkar University,” she tells us while touching up her cheeks with some primer. Nair happens to be a graduate in English literature from Lady Shri Ram College for Women. She later also pursued a degree in PR and advertising from the Indian Institute of Mass Communication in Delhi. But all along, only her stage felt like home. “Somehow I found my passion within dance. But people often ask me, what is the point of dance? I don’t have an immediate answer always. I did try working for a while. And it’s not like it didn’t work for me, but I just couldn’t leave it (dance). Every time I tried to do something else, I saw that my dance would go away from me, and that terrified me. And that terror made me cling harder to dance,” she says while continuing with her routine.

Nair, who is currently under the tutelage of Padma Shri Jayarama Rao and his wife Vanashree Rao, is quite a few performances and awards old. But despite all her laurels, the struggle to establish herself as a professional dancer is far from culmination. “Just the other day I was thinking that it’s so hard to chart your path as a classical dancer, because there’s no blockbuster film or promotion, or any of those moments which assure you that yes, now you are a dancer,” she says as she marches in to the next room bare feet. The sparkling white floor is touched with a hue of bright yellow from the sun peaking outside her window. The dancer’s day has only just begun.

As Nair rushes into the cab within minutes of her performance, one is surprised to see her slightly nervous for the very first time, that too after a successful show. “We’re already running a little late. I can’t wait to see the girls,” she says as she quickly tucks herself into the car next to us. A smile betrays her panic, as Nair dials a number on her phone to check where the rehearsals will be held. “I teach these kids as a part of Sarvam Foundation in a Vasant Kunj community hall. But I think we will be practising in the park next door today. Let me check,” she says at the same moment as the voice on the other end answers and confirms her doubt. Nair has changed into a pristine white and red kurta after the performance and there’s now a hint of added radiance on her face as she makes her way to what seems to be her most favourite part of the day. “So these girls are going to perform in Vizag and I have to do a few step corrections today. They will be on an AC train for the first time in their lives!” she says as we take the final turn towards our destination.

There’s a spring in her feet that’s hard to miss as she continues to chat us up while we walk to the large, circular enclosure in the middle of the park, aesthetically shaded by a towering canopy. Waiting inside are four young girls in modest, but neat and vibrant dance uniforms. “I have been teaching them dance for almost three years now —they are all from economically weaker sections.

I always had a passion for my dance, but teaching them has given me a purpose,” she says as the girls, all under the age of 15, greet her and don’t waste a second before beginning practice. As they assume their positions on their makeshift stage, Nair faces them and opens the session with the Kuchipudi pranaam — the girls follow suit in choreographed harmony, quite literally. “Kal kaunsa step bataya tha?” (“What step did I show you yesterday?”) the performer, now in the role of a teacher, asks her disciples. The friendly neighbourhood park for children, dogs and joggers, almost magically transforms into a proscenium stage within seconds, under the glowing twilight sun. A keen audience can also be seen assembling on the other side of the fence. The performers, however, seem oblivious to it all.

After a couple of minutes, Nair excuses herself from her girls, almost reluctantly, to attend to us. “Don’t stop practising,” she tells them as she settles down to face our questions one last time. “Yeah tell me,” Nair says, straightening out some creases on her kurta. “Yeah, so as I was saying. The idea of the Sarvam Shakti project under the Sarvam Foundation, as started by Bharatanatyam dancer Neha Bhatnagar, is to empower young children through the classical arts, especially the girl child. Because, no matter what you say, they are marginalised. I was invited on board by Neha, and I am so glad she did because it opened my eyes to what dance can do. How many people even have access to the classical dances, really?” she asks while keeping a close watch on the girls from the corner of her eye. 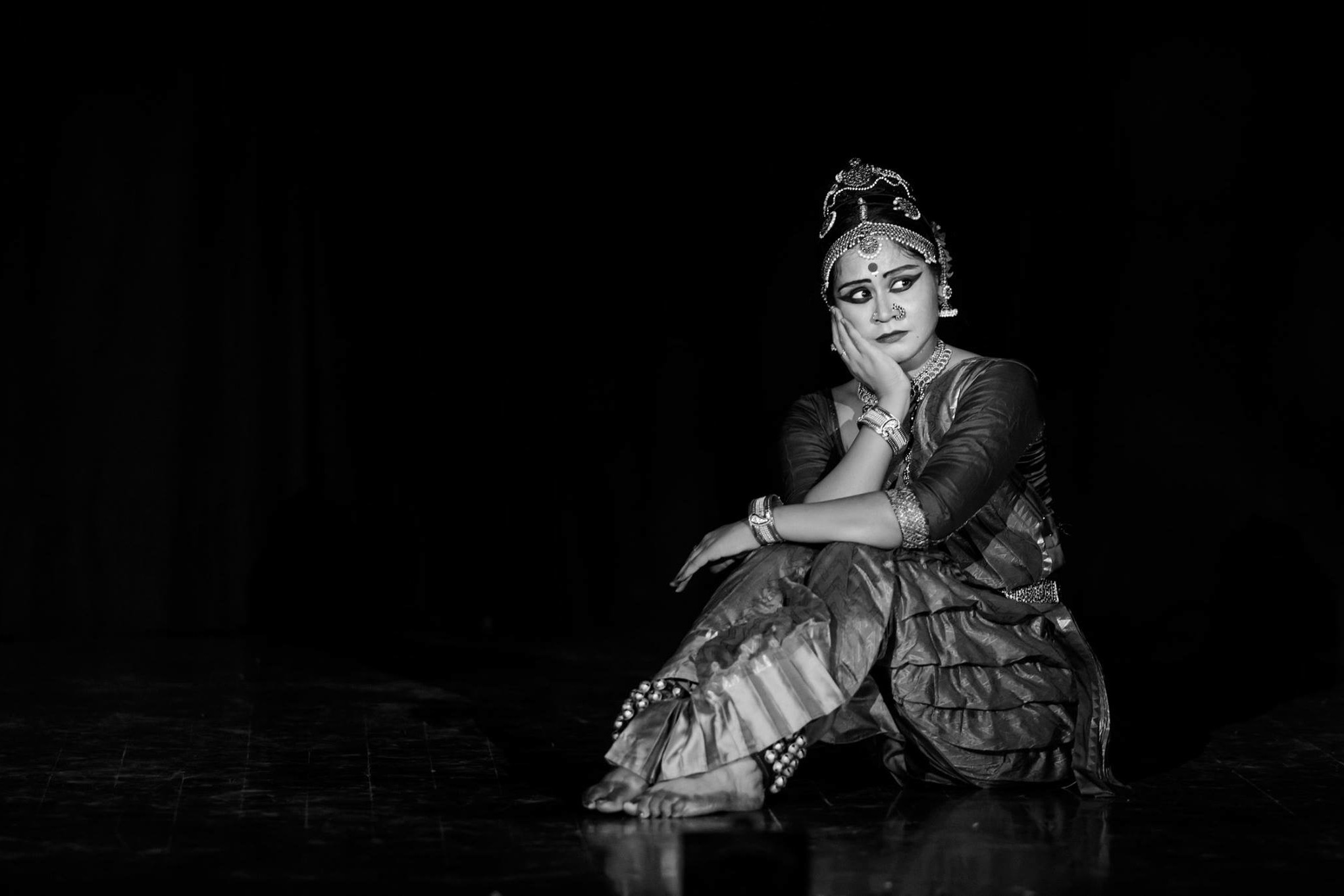 Being a student herself, Nair currently spends over twelve hours each day practising or studying her craft. Despite being at a rather formative stage of her professional journey at present, it’s this unique purpose that fuels her passion, more than material rewards or honours.

“The girls have already travelled to Poland twice, once last year and again this year, under the Brave Kids initiative. Isn’t that amazing? When I had to fill up their visa forms, that was such a challenge for me, because a lot of them did not have the documents that you need. They don’t have permanent addresses. So, a lot of those things that you take for granted, they don’t have. In a sense it’s good as well because they are being given a legitimate proof of identity, so you can even look at it that way,” Nair says.

The immense time invested into the project comes with its myriad obstacles. However, despite her own uphill climb as a struggling artiste, Nair’s priorities have remained unchanged. “The girls also had to be taught little things, which we don’t pay much attention to, when they were going into a completely new environment abroad. Like using cutlery or telling them it’s okay if they want to use their hands to eat and how they should be telling their host family about it,” she says as she prepares to conduct the final round of rehearsals for the evening.

As the girls packed their bags and prepared to put on their shoes, we quickly walked up to them for a conversation. After completing our introduction with Karishma, Jyoti, Anjali and Shivani, we sat listening to the fascinating stories of their self-discovery in the past three years under the leadership of their “Ranjini Di”. “Pehle toh hum bas TV mein dance dekhte thay lekin jab Ranjini di ke paas aaye toh laga ke haan, hum bhi dance kar sakte hain,” (“We had only watched dances performances on our TVs until we met Ranjini, who then made us realize that we too can dance”) Anjali says.

It is, indeed, a difficult prospect as access to the classical arts, conventionally, comes with a certain amount of social and economic prowess, neither of which the girls are privy to. “Humaare paas itni facilities nahi hai ke hum baahar jaaye, humne toh socha bhi nahi tha ke hum baahar jayenge. Par dance ek aisa cheez hai jiske liye hum baahar jaa rahe hain aur duniya dekh rahein hain,” (“We don’t have so many privileges or facilities that would allow us to travel out of the city, we never even thought we could travel out of our homes. But dance is such a thing that it has helped us travel and see the world”) Karishma says.

Poland was only one milestone in the month-long carnival for the four budding artistes, who later realized that they would be jet-setting to other parts of the continent as well, on their very first trip outside home. “Hum jab jaane waale thay, tab waha jaake pata chala ke hum Slovakia bhi jayenge. Hum do partners thay, toh hum mein se ek Hungary mein tha, aur doosra Slovakia mein, bilkul border ke paas,” (“When we were taking off, we got to know we would also go to Slovakia. Me and my partner were together. One of us stayed in Hungary while the other was right across the border in Slovakia”) Karishma explains. They are, perhaps, among the first in their entire neighbourhood or schools to have taken such huge steps with their twinkling toes.

As their dance gives them the power to already shoot for the stars, the girls have slowly, but surely, started to put their big dreams in place. While one wants to become a doctor and the other a police officer, young Shivani wants to continue dancing even after school. “Abhi jaise didi hume sikha rahi hai, mera bhi hai ke main badi hoke dancer banungi, aur jin logo ko opportunity nahi milti hain, main unko bhi sikhaaungi,” (“Just like didi (Ranjini) is teaching us how to dance now, I too want to grow up and be a dancer like her, and teach dance to the ones who wouldn’t otherwise get the opportunity”) she says, as Nair silently watches them speak from a distance, assured that she won’t have to play mentor this one time, among many more to come.