Text of a statement by former students of National Law University, Delhi, in solidarity with the students of JNU 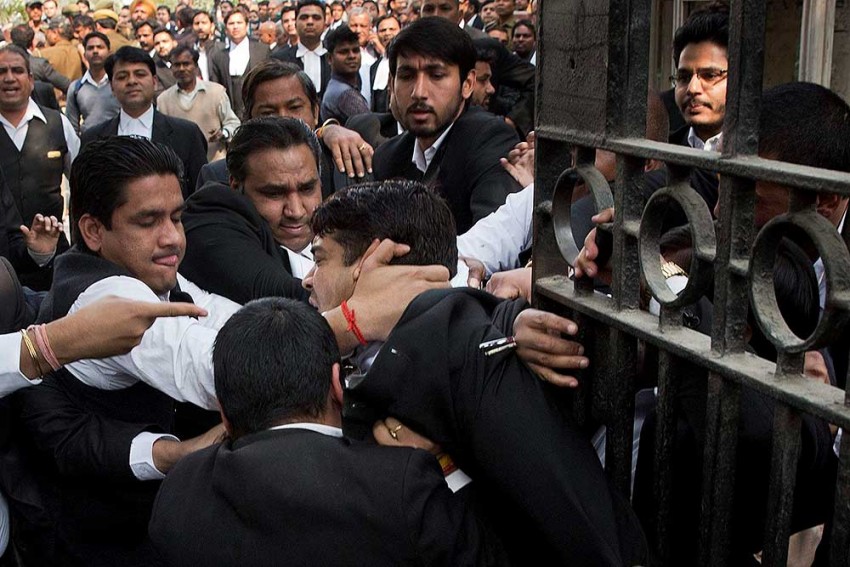 A lawyer, center, who spoke to the media supporting student leader Kanhaiya Kumar, is beaten up by other lawyers outside Patiala House Courts in New Delhi. Kumar has been arrested by the police on charges of sedition.
Photo by PTI
Aarti Bhavana, et al, Aditya, Charu Rawat 2016-02-18T16:07:45+05:30 'Matter Of Deep Shame For Legal Community' 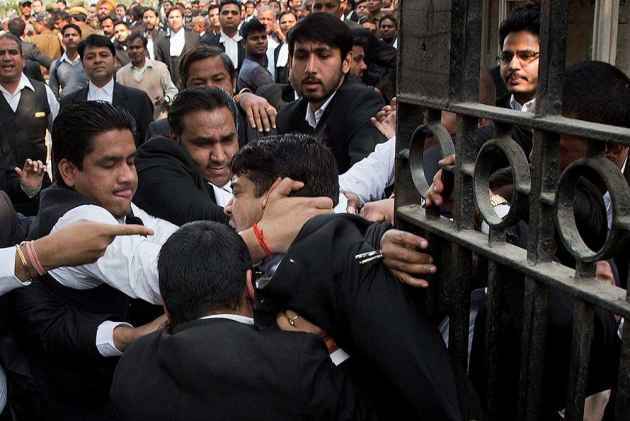 “In the End, we will remember not the words of our enemies, but the silence of our friends.”

We, former students of National Law University, Delhi, choose to speak out in solidarity with the students of Jawaharlal Nehru University (JNU) in such times, in the interest of upholding and protecting the constitutional values we were taught to cherish during our years in University. Amongst us, one would find a variety of opinions on issues of legal and constitutional importance including capital punishment, the execution of Afzal Guru, and the issues surrounding Jammu & Kashmir.

Despite the multiplicity of our views, we believe that every citizen and student has the right to voice their opinions, however unpalatable they may seem, without the fear of persecution.  The right to free speech and expression is guaranteed under our constitution, and is essential to democracy itself. Further, we believe that universities play a special role in constitutional democracies as incubators for new ideas that challenge established norms and present just solutions to persisting problems. Free space for dialogue, debate and dissent becomes vital on university campuses for them to live up to their essential role.

We are deeply concerned about the events that have unfolded in JNU and strongly condemn the use of criminal sanction and police forces to suppress the voices of students in JNU. The use of the police to create an atmosphere of apprehension and fear on campuses will destroy the space for ideas that are undesirable for established forces, ideas that question the status quo and push progressive goals. This strikes at the very heart of our universities. The carte blanche given to the police by the administrative authorities of JNU to “do as they deem fit” on the JNU campus is unacceptable and must be revoked immediately.

A constitutional bench of the Supreme Court of India in Kedar Nath v. State of Bihar (1962) has held that “criticism of public measures or comment on Government action, however strongly worded, would be within reasonable limits and would be consistent with the fundamental right of freedom of speech and expression.” It is clear that provisions that criminalise sedition cannot be used to curb dissent and such use cannot be condoned. We strongly condemn the arrest of Kanhaiya Kumar, President of the JNU Student Union on charges of sedition.

As young lawyers, we are also deeply shocked to hear that members of the public, including some lawyers, used physical force against students and teachers of JNU and media personnel in the district court at Patiala House, Delhi on 15 February, 2016. In India, lawyers have upheld a strong tradition of being leaders of movements towards political and social progress, and such behaviour is reprehensible and a matter of deep shame for the legal community.

Therefore, we strongly oppose the use of police force against the JNU students for exercising their constitutionally guaranteed right to freedom of speech and expression. We believe that the imposition of sedition charges amounts to abuse of law and demand for the immediate release of Kanhaiya Kumar, President of the JNU Student Union.

Are Nations Made Of Such Brittle Bones?