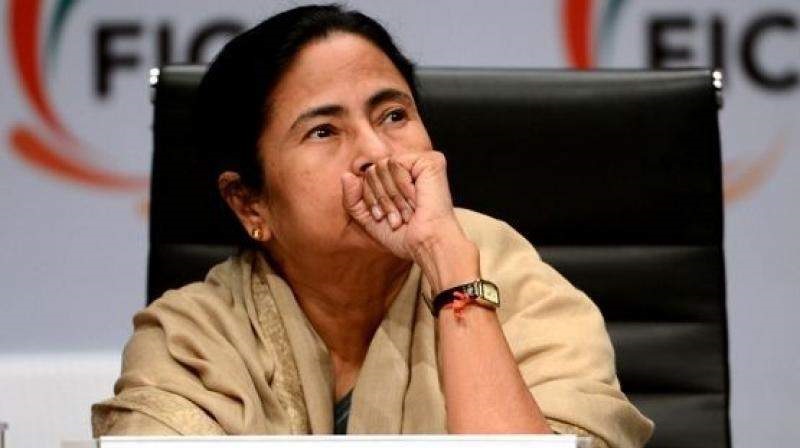 In latest development over the longstanding Teesta dispute between India and Bangladesh, West Bengal CM Mamata Banerjee has once again raised the issue of a polluted Mathabanga river flowing from Bangladesh into India and insisted on its cleaning to be a prerequisite for resuming talks on Teesta.

The Mathabanga is a distributary of the Padma River (the Ganga’s name in Bangladesh) which enters India at Gede and then splits into Churni and Ichhamati in West Bengal. The Mathabanga-Churni river is 72 kilometres long, dotted by 120 villages in which fishing is the primary source of livelihood. It is subject to heavy contamination, rendering the water unusable, causing revenues from fisheries to drop by as much as 75 per cent, and even contaminating groundwater aquifers in the area. While the latest contributor to Mathabanga-Churni’s polluted waters is a private sugar mill-cum-distillery at Darshana, Bangladesh, the problem is at least a decade old. The Mathabanga & Churni River Rescue Committee (MCRRC) has left no stone unturned in agitating for cleaning up the Mathabanga-Churni stretch, and even reached out across the border to Sheikh Hasina with their concerns. However, it was only in May 2017 that Banerjee took up the Mathabanga-Churni pollution issue with PM Modi, shortly after Bangladeshi PM Sheikh Hasina’s visit to New Delhi.

Mathabanga-Churni and Teesta: Part of the Same River System

The Mathabanga-Churni rivers, along with the Teesta, are among the 54 transboundary rivers shared by India and Bangladesh. Together, they form a part of the Brahmaputra-Ganga-Meghna (GBM) basin which occupies an area of 1.7 million km2 across five countries, namely India, China, Nepal, Bangladesh and Bhutan and is home to 630 million people. Despite its sheer vastness, multiple riparians and huge population, the GBM basin is not subject to any comprehensive, multilateral water cooperation and management mechanisms. Instead, a number of formal and informal bilateral mechanisms have been established to jointly manage certain sub-basins.

The Indo-Bangladesh Joint Rivers Commission (JRC) is one such mechanism established jointly by India and Bangladesh in 1972 to work “together in harnessing the rivers common to both the countries for the benefit of the peoples of the two countries”. Since its very inception though, the JRC has been singularly focused on the Ganga River and rather unknowingly sowed the seeds of a fragmented outlook towards the larger river basin shared by India and Bangladesh. The idea of an agreement and a River Basin Organisation (RBO) which cover all the transboundary rivers shared by the two countries and treat them as one, integrated basin has been a part of the hydropolitical discourse on both sides of the border for some time now, but does not reflect through the actions of the JRC or the governments of either country.

It is no surprise, then, that the Ganga Treaty took two decades to negotiate and that negotiations on the Teesta really took off after the Ganga Treaty was signed, or that when Sheikh Hasina visited New Delhi in 2017, Banerjee offered “other rivers systems”, namely the Torsa, Sankosh and Raidak rivers ‘in place of’ the Teesta to meet Bangladesh’s water needs. Banerjee’s latest demand for cleaning up the Mathabanga-Churni rivers in exchange of resuming Teesta talks is the latest example of India’s (and to a large extent, South Asia’s) narrow and fragmented outlook towards its water resources. The Mathabanga-Churni pollution issue is grave, but it does not affect the sharing of the Teesta in any way. Banerjee’s motives, then, are political.

The gravity of adverse effects of the polluted waters of Mathabanga-Churni rivers on the health of the local environment, communities and economy is undisputed. By linking this issue to the pending Teesta agreement, Banerjee could be trying to achieve a ‘quid pro quo’. However, her vocal opposition to the agreement is well known, and this is more likely another tactic to delay any progress on the Teesta issue. Banerjee opposes the agreement “to protect the interest of the farmers in the area”; Teesta’s flow in northern West Bengal drops drastically in the lean season, and parts of the river are reduced to a trickle. The Teesta is vital for irrigating 1.20 lakh ha of land in northern West Bengal and the draft treaty in its current form can seriously impact agriculture in this area.

However, giving more of the Teesta to Bangladesh can hurt Banerjee and her party TMC electorally, especially in northern Bengal where they do not enjoy huge popular support among the ethnic Nepalis and Gorkhas, Hindu Bengalis who have arrived from East Pakistan/Bangladesh, tribal communities, and Marwaris who have settled here for trade. Since Banerjee and TMC are looking to consolidate votes in North Bengal, they are in clear opposition of any unpopular move such as supporting the Teesta agreement as it can significantly upset their political prospects in the region.

Even though the Indian government has constitutional powers to override West Bengal’s position in matters of transboundary rivers, reality dictates that it cannot ignore a border state as strategically and economically important as West Bengal. The districts of Jalpaiguri, Darjeeling and Cooch Behar of northern West Bengal (which, incidentally, are also a part of the Teesta river basin) are located in the geopolitically important Siliguri Corridor or more popularly, ‘Chicken’s Neck’, which shares borders with Bhutan, Nepal, and Bangladesh, and is in the vicinity of China. In terms of economy, the state contributes 40% of the GDP of East and North-East India and is the gateway to the trans-regional economic and trade route under India’s ‘Act East’ policy. The Gajaldoba barrage, which controls the flow of the Teesta to Bangladesh, is also located in northern West Bengal, specifically, the Chicken’s Neck, and catapults the state to a pivotal position in the entire Teesta sharing scenario. Banerjee has been able to leverage these factors to stall the signing of the agreement so far. Her insistence on ‘fixing’ the Mathabanga-Churni pollution issue before reopening negotiations on the Teesta is another way to postpone signing the Teesta agreement.

As the upper riparian to the Teesta and most of the other transboundary rivers shared with Bangladesh, India has little incentive in the short run to take initiative in establishing comprehensive transboundary water cooperation with Bangladesh. It has largely been able to get away without signing the agreement due to its upstream location and clear regional hegemony which have increased its holding capacity. India has been able to ‘make up’ for the failure of Teesta talks in 2011 by signing the much-awaited Land Boundary Agreement in 2015, and providing aid to Bangladesh in areas such as defense, transport, electricity, education, maritime safety etc. As the lower riparian of the Teesta (and most of the other transboundary rivers) and smaller neighbour, Bangladesh has had little choice but to follow the course of Teesta negotiations as chalked out by India, which, in turn, are influenced by West Bengal.

However, this scenario may not continue for long. As much as Bangladesh needs Teesta’s waters and India’s cooperation, India too needs Bangladesh in many ways. India finds in Bangladesh, especially in the secular and pro-India Awami League government led by Sheikh Hasina, a strategic partner connecting India to its north-eastern states, fighting terrorism in South Asia, and pursuing its ‘Act East’ policy. In a volatile and deeply mistrusting South Asian neighbourhood which is steadily coming under the influence of China, Bangladesh has been a steadfast friend to India. It is in India’s interest that the Awami League government maintains power in the upcoming national elections of Bangladesh, against the Bangladesh Nationalist Party (BNP) which has vociferously criticised Sheikh Hasina and India over the non-signing of the Teesta agreement. India can no longer pursue the tactic of offering more and more cooperation and aid in various areas to Bangladesh while stagnating the Teesta issue because of domestic politics. Sooner or later, it will have to prioritise signing the Teesta agreement by getting Banerjee to cooperate on sharing Teesta’s waters with Bangladesh.

Moreover, both countries need to manage their water resources efficiently for sustainable socio-economic development. Both India and Bangladesh are looking towards a grave water crisis in the future; neither can afford to view their rivers and riverine ecosystems in an isolated, fragmented and politicised manner. Water availability per capita has been continuously falling for the past three decades, and groundwater is contaminated and being exploited at unsustainable levels (India, for example, uses more groundwater than China and the USA combined). Both countries are vulnerable to climate change and have been experiencing extremities in floods and droughts, shifts in seasons, and erratic rainfall with a smaller number of intense ‘wet’ days and longer dry spells.

In this scenario, India cannot afford to rely on its upstream location. There is an urgent and equal need for both Bangladesh and India to collaborate and take more comprehensive and effective steps to establish holistic transboundary cooperation on not just the Teesta, Mathabanga-Churni, or even the Ganga, but on all Indo-Bangladeshi transboundary rivers. Such a basin-wide approach, backed by an agreement and RBO that are overarching and holistic, will go a long way in building transboundary water security and cooperation between the two countries.

Prasoon Joshi Will Not Be Allowed To Enter Rajasthan: Karni Sena