Contrary to media reports, the current spate of violence is not about the overall problem of illegal migration from Bangladesh. It is about Bodo aspiration to secure or sustain their majority in areas in and adjoining the Bodo heartland. 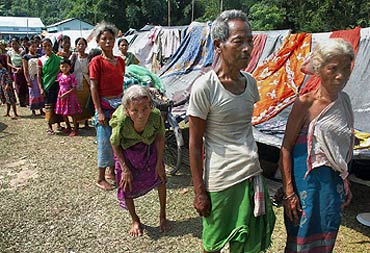 It is a new round of war over territory in Assam. In this ethnically polarised state, local politics and probable, yet unconfirmed involvement of former and active insurgent groups, is fuelling the existing schism between the two communities, the Bodos -- the largest plains tribe in the state settled primarily in the north bank of the Brahmaputra river -- and immigrant Muslim settlers. On last available reports at the time of writing, 40 persons from both communities had been killed in the north Assam districts of Udalguri and Darrang, located about 100 kilometres from the state capital, Dispur.

Clashes started between the two communities on October 3 at Bhalukmari and Mohanbari villages of Udalguri district following rumours that a Bodo youth was missing. Though the youth was later traced and found to be safe, people belonging to two communities indulged in competitive arson at Ikrabari, gutting a total of 40 houses. Precipitating the already charged situation, a Muslim youth, Abdul Jabbar, was stabbed to death within the premises of the deputy commissioner’s office in Udalguri. There was no stopping the violence after this, in spite of the initial deployment of police personnel and their subsequent reinforcement by five companies of the para-military Central Reserve Police Force (CRPF) and 11 columns of army personnel.

Since October 3, violence has affected 35 villages and led to the death of 40 persons, 17 killed in clashes between armed mobs carrying bows and arrows, spears, machetes, and even guns and the remaining 15 in police firing. Unofficial counts, however, put the toll well past 50. The wave of violence has forced almost 80,000 people from both communities to take shelter in 36 relief camps (22 in Udalguri and 14 in Darrang districts) set up by the government. The worst affected areas include Rowta, Dalgaon, Kharupetia, Bhakatpara and Udalguri. Fresh reports indicate that the violence was gradually spreading into the adjoining Baksa district -- which has significant Bodo and Muslim populations -- as well.

The violence has followed a ‘majority attacking the minority’ pattern in both the districts. In Darrang, with over 35 percent Muslims and a far smaller Bodo presence, it was mainly Muslim mobs that attacked tribal villages. However, in Udalgiri district, which was carved out of Darrang district in 2004, has a Bodo population in excess of 50 percent and Muslim settlers are in a distinct minority. Here the Bodo population went on a rampage against the Muslims.

Ethnic violence in the Bodo heartland of Assam has a long history. The Bodo Accord of 1993, which attempted to bring end to years of arson, violence and instability led by the All Bodo Students Union (ABSU), which had commenced in 1986, sought to identify areas where the Bodo population exceeded 50 percent as ‘Bodo Areas’ to be brought under the direct administration of the Bodo Autonomous Council (BAC). An unintentional result of this provision has led to recurring and organised ethnic cleansing in areas where the Bodos do not yet constitute 50 percent of the population. The willing participants in these movements have been Bodo leaders, drawn either from political or community based organisations or insurgent factions. Their targets have sometimes have been the adivasis (tribals from outside the state brought to work in the tea plantations) and sometimes, the Muslims (Bangladeshis or otherwise).

It is important to note that majority of the Muslim victims in the current spate of violence (loosely referred to as Bangladeshi Muslims by the media) are of East Bengal (which later became East Pakistan) origin. They had migrated into Assam much before the creation of Bangladesh. As per the agreements of the Assam Accord, "All persons who come to Assam prior to 1.1.1966, including those amongst them whose names appeared on the electoral rolls used in 1967 elections shall be regularised." This makes these migrant settlers bona fide Indian citizens, notwithstanding their origin.

Contrary to media reports, which have linked the violence to the overall problem of illegal migration from Bangladesh and its concomitant pressures on the native population, this spate of violence thus, needs to be analysed from the point of Bodo aspiration to secure or sustain their majority in areas in and adjoining the Bodo heartland. 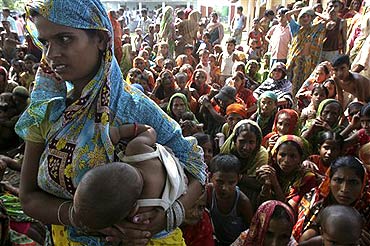 Reports indicate that people of both communities are confronting each other with full preparation. Both have access to sharp weapons, bows and arrows, a fact which further reinforces the claim that it is just not an assault by a dominant group on hamlets of vulnerable migrant population, but almost an equal fight between two well-prepared communities.

Two months earlier, in August 2008, Bodo majority areas in Assam had witnessed a similar violence, albeit of lesser intensity. At least seven people were killed and 50 injured in a series of clashes between both communities in Darrang, Udalguri and Kokrakhar and Sonitpur districts. Violence on that occasion had started on August 14 in the Udalguri district, when two Bodo boys were killed in a clash during a 12-hour shutdown called by a little-known organisation, the Muslim Students’ Union of Assam, against the harassment of genuine Indian Muslims in the state. Nearly 5,000 people fled their homes at that time and normalcy was restored only after a fortnight.

Divisive politics in the Bodo heartland, between the erstwhile Bodo Liberation Tigers (BLT) and the National Democratic Front of Bodoland (NDFB) cadres -- both operating under ceasefire agreements with the government -- is also getting intertwined in the entire issue. The BLT, after a seven-year insurgent campaign, had settled for a peace deal with the government of India, which led to the establishment of the Bodoland Territorial Council (BTC) in December 2003. The BTC comprises four districts -- Kokrajhar, Chirang, Baksa and Udalguri. The BTC was the second such attempt at providing the Bodos -- the largest plains tribe in Assam -- with an autonomous self-governing body, after the 1993 Bodo Accord between the Union and state governments and the All Bodo Students Union (ABSU), which had led to the setting up of the Bodoland Autonomous Council (BAC). Internal divisions among the Bodos led to the collapse of the BAC.

The BLT surrendered en masse just before the establishment of the BTC in December 2003. The Bodo movement however, split into two factions, one under the leadership of Hagrama Mohillary and Chandan Brahma, who formed the Bodoland People’s Party (BPP) and took control of the BTC with the backing of the Congress; and the second faction, the Bodoland People's Progressive Front (BPPF), led by moderates Rabiram and U.G. Brahma, which was sidelined as they fared poorly in the 2006 state Legislative Assembly polls. Both factions continue to accuse each other of fomenting trouble in the area.

The other key player in the Bodo heartland, the NDFB has been 22 years in existence. On May 25, 2005, this outfit signed a cease-fire agreement, with the Union and Assam governments. The NDFB’s over-ground status bothers the BPP to a considerable extent, not just because of the low-level violence that continues between NDFB and former BLT cadres, but also as a result of the complications the NDFB’s eventual political agreement with the government is likely to create for Hagrama Mohillary and co. Unsurprisingly, Hagrama Mohillary, on October 4, pointed to an NDFB role in the continuing violence and asked the Assam government to call off the ceasefire with the outfit. 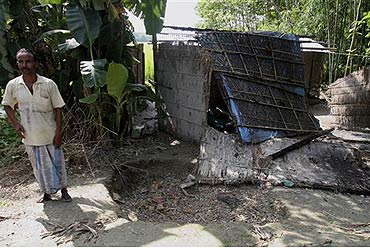 The Assam government, BPP’s political partner, echoed Mohillary’s concerns. Assam government spokesman and health minister Himanta Biswa Sarma, on October 5, stated that the violence in Udalguri and Darrang was "not an ethnic conflict", but rather the result of a planned ethnic cleansing by the NDFB to drive out all non-Bodos from the area: "This is not a clash between Hindus and immigrant Bangladeshi Muslims as projected, but a systematic pogrom by the NDFB, as many of the people affected by the violence are genuine Assamese Muslims, Bengali Hindus, common Bodos, besides a few Adivasis (tea plantation tribals) as well." The minister’s conclusion relied heavily on the "use of guns" by the attackers as he painstakingly explained that none except for the militants had access to such weapons in the area. The minister also announced that four NDFB cadres had been arrested in this connection. On the same day, Chief Minister Tarun Gogoi stated that the ceasefire agreement with the NDFB was under review in view of its participation in violence.

On the face of it, the NDFB’s capacity to initiate and sustain such a ‘pogrom’ is doubtful. A bulk of its cadres is settled in three designated camps set up by the Assam government. Others live in their respective villages, complaining of inadequate space and facilities in the camps. Even though occasional clashes between the former BLT and NDFB cadres have taken place on several occasions, it is highly improbable that the outfit would be central to widespread violence in areas closely monitored by the BLT and also by the Assam government. NDFB, moreover, is an outfit consisting of the minority Christian segment among the Bodos and has little antipathy towards the Muslims. Moreover, the NDFB’s top leadership, including ‘chairman’ Ranjan Daimary, is still based in Bangladesh and is unlikely to participate in any movement which targets the migrant settlers, who are alleged to be drawn from Bangladesh.

In the immediate future, the clashes between the two communities are likely to reduce in intensity solely due to the large presence of Security Forces in the affected areas. However, the recurrence of violence in the near future -- and periodic reverberations in years to come -- cannot be ruled out.

The state government’s knee-jerk responses are being executed at a war footing in Assam. Customary requests for rushing in CPMF companies have already been placed with the union home ministry. The deputy commissioner of Udalguri has been transferred and the police chief of the district suspended. In all, the spate of violence has exposed the state government’s lack of preparedness to deal with the sudden outburst of violence, and this is particular cause for concern in view of similar communal clashes that rocked the same districts just two months ago. To blame it all on an outfit, 90 per cent of whose cadres are overground, is nothing less than evasive and dishonest, an attempt to cover up the utter failure of administration over several years