Looking Back At Pokhran II

May 11 and 13 mark the fourth anniversary of the 1998 Pokharan nuclear tests -- a re-appraisal of what was achieved by those tests. 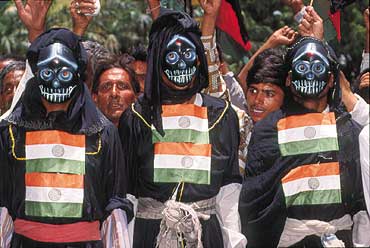 outlookindia.com
-0001-11-30T00:00:00+05:53
On October 31, 2000, speaking on the banks of the Narmada river, Home Minister L K Advani listed the nuclear tests of May 1998 at Pokhran, the conflict between India and Pakistan at Kargil in the summer of 1999 and to the Indian Supreme Court's judgement that allowed construction on the Sardar Sarovar dam, as the biggest achievements of the first three years of BJP rule in India. Today he could add the scandal that broke out in March 2001, when tehelka.com, an online newspaper revealed direct evidence of several members of parties that are part of the ruling National Democratic Alliance taking bribes for a defence deal, and the current pogrom in Gujarat as the achievements of the next two years.

This week being the anniversary of the Pokharan nuclear tests, it is appropriate to examine what was achieved by conducting those tests.

Broadly speaking there were two kinds of benefits that were promised by pro-nuclear advocates in India. The first was an improvement in India's security. Once again we turn to Advani who, soon after the tests, confidently proclaimed, "India's decisive step to become a nuclear weapon state has brought about a qualitative new state in India-Pakistan relations, particularly in finding a lasting solution to the Kashmir problem." The irony in this claim is that it is negated by Advani himself through one of the achievements of the BJP government that he proudly claimed credit for - the Kargil conflict.

The Kargil conflict was the largest direct war between two nuclear weapon states ever. Earlier the most serious episode was the clash between the Soviet Union and China in March 1969 along the banks of the Ussuri River, which led to about 300 casualties. In contrast, Kargil led to a toll of somewhere between 1,300 (according to the Indian government) and 1,750 (according to Pakistan) lives.

For the first time since 1971, India deployed its air force to launch attacks. In response, Pakistani fighter planes were scrambled for fear they might be hit on the ground. Voices in both countries, especially India, called for a more aggressive war with the opening of other fronts or the bombardment of Pakistani supply routes to Kargil. High-level officials in both countries issued at least a dozen nuclear threats. Thankfully these did not come to pass.

Rather than inducing self-reflection - after all nuclear weapons were touted as deterrents that would prevent war - Kargil only propelled the two countries to move further towards deploying their nuclear weapons. Barely a few months after Kargil, the Draft Nuclear Doctrine released by the Indian National Security Advisory Board called for the development and early deployment of a triad of "aircraft, mobile land-missiles and sea-based assets" to deliver nuclear weapons, in a manner that allowed for "rapid punitive response". Pakistan, for its part, created the National Command Authority a few months later to establish command and control mechanisms for Pakistan's nuclear weapons and missile systems, making it clear that it too envisioned deploying its missiles loaded with nuclear weapons.

None of this helped in stopping the recurrence of Kargil like crises, especially to the accompaniment of nuclear sabre rattling. The same scenario was repeated after the terrorist attack on the Indian Parliament on December 13, 2001. Both countries have built up their troops to their biggest levels ever and high-level leaders have come out with a flurry of nuclear threats. It is still too early to express any gratitude that this has not come to pass.

Despite all this, and worldwide concern, no "lasting solution" has been found to the Kashmir dispute. On the face of it, then, the tests of May 1998 did not lead to any increased security. What instead they did was to actualize for South Asia Robert Jay Lifton's powerful observation: "The central existential fact of the nuclear age is vulnerability."

The second set of alleged benefits included various claims about how the tests and the acquisition of nuclear weapons would enhance India's prestige in some fashion. This was articulated in many ways. In the words of India's Minister of Science and Technology, the tests "reflected India's endeavors to find a rightful place among the World's powers." Several expressed the hope that the tests would fetch India a position in an expanded Security Council of the United Nations. Ashok Singhal, head of the Vishwa Hindu Parishad, went to the extent of even proclaiming that India had finally demonstrated its "manhood" and that earlier the country had been "ruled by a bunch of hijras (eunuchs)."

It is rather trivial to see that these make little or no sense. The connection sought to be drawn between nuclear weapons and manliness would be laughable if it were not a tragic reminder of the patriarchal, male chauvinist nature of the Sangh Parivar that was on display during the many crimes against women in Gujarat. A position in the UN Security Council has simply not been forthcoming, tests or no tests. (The existence of a special class of nations within the UN system is itself an affront to visions of a democratic international polity, and the principled response should be to do away with the Security Council - but that is a different story.)

And finally to think that nuclear weapons are the "due" of a billion people, but not adequate nutrition, clean drinking water or gainful employment - none of which the BJP has talked about addressing - is vulgar to say the least. In fact, as economists like Rammanohar Reddy have argued, if India were to build up a nuclear arsenal as envisioned by its planners, the costs would be equal to the sum of all government expenditure on education - school and college - for the next decade or more. Nuclear weapons, in other words, would steal one-sixth of humanity what is really their due, the small probability that they can live a life of dignity. And if the weapons were to go off, then even this life of theirs may be lost.

(M V Ramana is a physicist and research staff member at Princeton University's Program on Science and Global Security. He is the author of "Bombing Bombay? Effects of Nuclear Weapons and a Case Study of a Hypothetical Explosion" (Cambridge, USA: International Physicians for Prevention of Nuclear War, 1999). Some of his writings can be found on the web . The above was Originally published in The Daily Times)