Home  »  Website  »  International  » Interviews  »  'LoC Is The Problem, Not The Solution'
indo-pak SUMMIT

'LoC Is The Problem, Not The Solution'

Musharraf on Agra summit, Kashmir and his expectations. Excerpts from the interview conducted for Gulf News that will also appear in Outlook to hit the stands tomorrow. 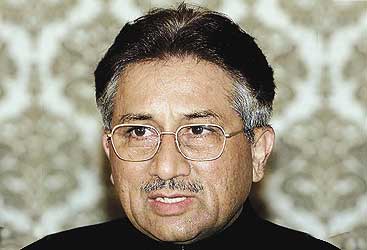 outlookindia.com
-0001-11-30T00:00:00+0553
Forty-eight hours before the summit, Pervez Musharraf betrays no anxiety but exudes the confidence of a man who is both the head of the armed forces and the civilian government. Dressed casually in T-shirt, chinos and sneakers, the president-general meets Gulf News Asia Editor Neena Gopal late Wednesday night at the sumptuously-appointed Army House in Rawalpindi Cantonment, and talks about the Agra Summit, Kashmir and his expectations. Excerpts from an interview conducted for Gulf News:

The run-up to the summit had started off with you being quoted as being "open" and "flexible" about the talks. But the perception now is that you have taken a 180-degree turn to repeatedly emphasise that talks must focus solely on Kashmir. Why has that happened?

I have never at all said that I will be flexible on the issue to be discussed—which is Kashmir. I have said that Kashmir is the only issue. Yes, I will be flexible on Kashmir, but I would like to correct this misperception, this misunderstanding. I have never said that flexibility will be shown on the issue to be discussed. Kashmir is the issue, it is the reality on the ground.

I am not saying anything which is unrealistic. Why is there tension between India and Pakistan? Is there tension because of anything else? Therefore the focus should be on the main issue. The remaining issues, certainly if Prime Minister Vajpayee is keen, one would go ahead and discuss them too.

Is India trying to deflect attention from what you see as the 'core' issue by raining Confidence-Building Measures (CBMs) on Islamabad?

Yes. And this suspicion is there, not just now, I would say, it has been happening over the last 40, if not 50, years. In 1958, prime minister Jawaharlal Nehru declared that Kashmir was a part of India and rejected plebiscite. Till now, Kashmir has always been sidelined by India and, now that you have asked this question, even the Simla Accord and the Lahore Declaration didn't make any progress. Why? Because it avoided the main issue of Kashmir.... I can say with full certainty, that that declaration or that treaty will never go forward because people won't let it go forward. And that is why the Simla Accord and the Lahore Declaration didn't move forward.

Does it mean that in the forthcoming Agra Agreement—if one does materialise—should the Indian government not give you what you deem appropriate on Kashmir, you will go public with your disagreement?

Well, let's not raise issues of opposition and...

Let me rephrase that, what would you like to see in a possible Agra Agreement?

Again, this should be left to what I am going to discuss with Prime Minister Vajpayee. But I will say quite clearly, I mean to correct our focus. And we need to set our focus on Kashmir.

General, on the other points of contention such as the Sir Creek, the Wullar Barrage and Siachen, it is said that Pakistan and India were close to an agreement.... Would you allow these issues to be discussed concurrently with Kashmir, or will they be held hostage to the Kashmir issue?

Well, this is obviously going to come up against the view of the Indian government which has reiterated over and over again—just as you have on Kashmir being the main issue—that it is just one of the many issues that bedevil relations.Only the day before Vajpayee told Indian opposition leaders that Kashmir will be discussed in the totality of relations...

Would you be happy if the Indian government admits, in one way or another, that Kashmir is the core issue? Is that the minimum you are looking for?

I am just saying, it's nothing unusual that I am saying, I am not saying anything which is utopian by any nature. I mean we are trying to improve relations between India and Pakistan, engage India. The end game is this. I would say the end game really is to do something that will improve the condition of this economically-deprived region of the world, the most poverty-stricken region of the world. And how can we do that? We can do that if we remove the causes of tension between India and Pakistan. And how do we do that? By resolving Sir Creek? Or resolving Wullar Barrage? No, we have to do that by resolving the Kashmir dispute.

With only 48 hours before the summit, could you tell us about what you feel, what you would like, apart from Kashmir, to come out of Agra? Such as lessening of troops in the Valley...

No, I think everything, the starting point, let me put it this way, that would be going too far. I would really appreciate any withdrawal of troops, but that's expecting too much, maybe. If there is withdrawal, that would be excellent. But one has to first of all...

Yes, strike a rapport and build mutual understanding that strives for peace and the resolution of Kashmir. Everything will fall in line.

Did you change your mind about (meeting) the Hurriyat after JKLF leader Yasin Malik's comments in an interview in London that 'he did not expect this of Pakistan'?

You did say you would leave it to India, defer to its wishes on the matter. Yet, a day after Malik's interview, you issued an invitation to the Hurriyat for tea at the Pakistan High Commission in Delhi. Many believe it's a 'storm in a teacup'. Did you change your mind?

I haven't changed my mind at all. Right from the beginning, I have said and I am of this view even now that there are three parties to the Kashmir dispute—the Indians, the Pakistanis and the Kashmiris—and we believe the Kashmiris' representative is the Hurriyat. Now, Prime Minister Vajpayee has invited me, but I have always been saying that although, as a starter, we accept the non-presence of the Kashmiri representatives, but anytime in the future, they have to be included in the process of dialogue, if there has to be progress. Now, (as far as) the invitation to the Hurriyat is concerned, we sent out the invitation because we feel the Kashmiris, the APHC, ought to be taken along. However, it is up to the Indian government now, whatever their decision on the subject.

That doesn't really answer it. Because if you say it's up to the Indian government, they don't want the Hurriyat to come to tea...

I don't know whether the Indian government has allowed them to come to tea. I would certainly prefer having them there but I am certainly not going to make an issue of it. Because there's a greater issue involved.

How would you describe your feelings as the summit approaches? Two days to go, are you worried, are you confident? What is it that is going through your mind?

I never worry. That's out. I am at peace with myself. As they say, one doesn't clap with one hand, so on my side I am going with an extremely open mind so that progress is made and improvement of relations between India and Pakistan does take place.... But I am anxious. And I am intrigued, whether the Indian leadership is going to accept the centrality of the Kashmir issue. Because they have never done this before. So it is really intriguing. Because when they invited me, my stand has been very unambiguous, I think. Now they've invited me (although) I have never created any doubt in their mind about where I stand.

The Indian government has made it clear that they have put Kargil behind them and are prepared to move ahead. But they do have residual doubts about the 'jehadi' elements. You had said you would examine whether you would encourage the 'suspension' of the jehad if the right atmosphere is created. Has that time come?

First of all, I certainly do not have total command and control over the jehad, or over the freedom struggle going on in the Valley, which has its own dynamics and (is) very, very indigenous. All I can say is that progress on the Kashmir issue between Mr Vajpayee and myself will certainly have a sobering effect on the freedom struggle. I would also like to say that when you say India has put Kargil behind them, Pakistan has put Siachen behind it. Because on Siachen, the Indians came in and altered the Line of Control, which goes very much against and runs counter to the Simla Agreement. It is written very unambiguously that no party will alter the LoC, and that was, first of all, done in Siachen.

So, do you accept then that the LoC should not be changed?

The LoC is the problem. What is the freedom struggle going on about? It's about the Line of Control. It's the problem, not the solution. How can the problem be the solution? There are a number of solutions, but there are some that need to be rejected. One of them you have just said—the LoC being made permanent. Now, who in Pakistan will ever accept this? Nobody in Pakistan can accept this and expect to stay in power. I think it will be very unrealistic for any Indian leader to expect any leader of Pakistan to accept the permanence of the LoC.

Does that mean Pakistan is really seeking a step-by-step solution? Talks at regular intervals where Kashmir is discussed?

Well, I am for, if at all Prime Minister Vajpayee wants to discuss Kashmir and solve it, (then) with all boldness I can sit there and (if he says) in two days let's solve it, okay, or we can go (for) 24 hours and solve it. Certainly, it entirely depends on the process of the dialogue.

Why this utter silence on your part when India is raining CBMs in what they say is a bid to create a better atmosphere?

Yes, again, let us not deflect from the main issue. How can we have cbms when there is suspicion between the two countries? This is absolutely ridiculous. Other than releasing of fishermen or that cyclist, that gentleman Vikas—anytime I would like to do that, I am an extremely humane person, I would say—but on issues like the Director-General of Military Operations wanting to meet our DGMO, what does he want to come here and talk (about)? I am going to tell my DGMO, just keep quiet.And keep listening. Myself and Mr Vajpayee have to talk first and then (we'll) let the DGMOs talk. Anyway, the dgmos talk every Wednesday on the telephone.... The biggest CBM is the resolution of the Kashmir dispute.

So, is there hope for an Agra Agreement?

I have read every single agreement and treaty between India and Pakistan. I have studied it carefully and nowhere does it mention that Kashmir is the issue. Why is that? You see, we must also understand each other's compulsions. I would like to work to remove, to lessen, the compulsions on the Indian leadership and they should work towards understanding and removing our compulsions.

'Kashmir Is Not The Core Issue'