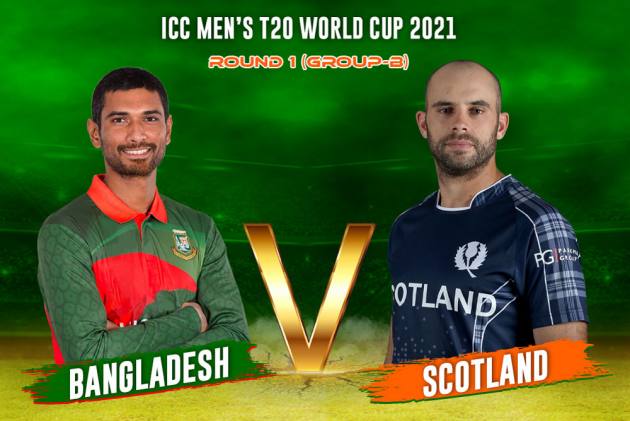 Day 1, Game 2, And First Shock! Scotland produced a thrilling win over Bangladesh in the second match of ICC T20 World Cup 2021 in Al Amerat, Oman on Sunday. Put in to bat in their Group B opener, Scotland were looking down the barrel at 53/6 in 11.3 overs. But they turned the table with Chris Greaves, in his second T20I, first hitting 45 off 28 balls then taking two wickets for 19. The 31-year-old was ably supported by Mark Watt, who hit 22 off 17 and took a wicket, and Bradley Wheal, who claimed three for 24. On a day Shakib Al Hasan became the highest wicket-taker in T20Is, Bangladesh played the first quarter of the game perfectly, then lost the plot. In the last over, however, Mahedi Hasan tried to pull off a win but '24 in 6' was always going to require a miracle. In T20 cricket, two fours and a six in one over don't really count as a miracle though. And the result, a six-run defeat. Catch cricket scores and highlights of ICC T20 Cricket World Cup, Group B match between Bangladesh and Scotland here:

A single off the third. 18 in 3. A full toss and Mahedi Hasan launches it for a six. 12 in 2. Hasan is even asking for a no-ball for height.

Safyaan Sharif with the final over. Mahedi Hasan takes a single off the first. 23 in 5. Mohammad Saifuddin hits the next for a four. 19 in 4.

Safyaan Sharif is operating with some control. Three from his second over. Nine from his two overs. Veteran Bangladeshis, Shakib Al Hasan (9 off 14) and Mushfiqur Rahim (4 off 10), are taking some time to settle down. BAN - 25/2 (6).

Bradley Wheal concedes seven runs in the first over, with Soumya Sarkar hitting the second ball for a four. Liton Das is Sarkar's opening partner. Target - 141.

Mustafizur Rahman on a hat-trick, and the new man Bradley Wheal plays the next ball to deep mid-wicket for a single. Safyaan Sharif, then, hit the next for a six. Nine from the last over. Rahman's figures: 2/32 including one maiden. 54 runs in the last five. SCO - 140/9.

Another one, and Shakib Al Hasan breaks Lasith Malinga's record to become the greatest wicket-taker in T20Is. The Bangladesh all-rounder now has 108 scalps. Michael Leask (0 off 2), caught by Mahmudullah at long off. SCO - 52/5 (10.4).

Murali Kartik and Anjum Chopra with pitch report for the official broadcasters. And they can't stop talking about the sun setting in Oman.

"Still a good pitch for batters, 170 would be gettable," they reckon. Moments ago, Oman beat Papua New Guinea, batting second.

Bangladesh captain Mahmudullah wins the toss and opts to bowl first against Scotland.

In the first match of the tournament, Oman chased down Papua New Guinea's 129/9 in just 13.2 overs without losing a wicket. A convincing 10-wicket win for the host in their Group B match. Aqib Ilyas (50 off 43) and Aqib Ilyas (73 off 42) hit unbeaten fifties.

Skipper Zeeshan Maqsood took four wickets for 20 runs, including three in one over. And he's the man of the match. His rival number, Assad Vala hit 56 off 43. But a poor start, with both the openers getting out for ducks, spoiled Papua New Guinea's chances.