Listless India Go Down Without A Whimper

Throttling the rival defence with their typical busy and pacy play, the Aussies strike telling blows to hand Pillay & Co. their second defeat in three outings 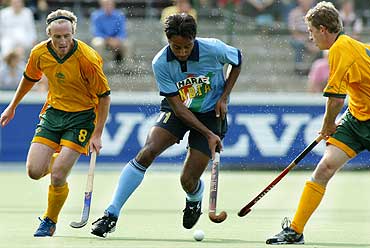 Australia struck telling blows in the second-half to hand a humiliating 4-1 thrashing to India in the 25th Champions Trophy at the Wagener Stadium in Amstelveen today.

It was Australia's first win in three matches, following their 3-5 defeat to the Netherlands and 4-4 draw with  Pakistan. For India, it was their second defeat in three outings, having lost 3-4 to the Dutch and beaten Germany 3-2 earlier in the six-nation elite meet.

India, who came here as one of the title contenders, will now have to pull up their socks and win their next two league matches by big margins if they are to break their Champions Trophy jinx.

Grant Schubert emerged hero for Australia, who led 1-0 at the break, with a hat-trick that highlighted his clinical finishing ability, while Troy Elder, playing a major role as a schemer, scored the other with a penalty stroke conversion.

The Australians struck form at the right moment from their point of view as they spreadeagled the Indian defence with their typical busy and pacy play. The Indians, after the early flourish, wilted under pressure and could not cash in on a great reprieve in the form of a great save by goalkeeper Devesh Chauhan off a penalty stroke.

India had their chances in the first-half when they launched a few splendid counter-attacks, but the finish did not match the fluency or sharpness as Dhanraj Pillay, Prabhjot Singh and Ignace Tirkey each messed up good scoring opportunities.

Indian coach Rajinder Singh's pre-match concern about his team's midfield play was well justified as there was far too much of individual play when a quicker release of the ball would have served them better.

The marking too was rather slipshod that allowed the Aussies far too much room.

The Aussies enjoyed a lot of space in the midfield and that formed the launch pad for their lightning attacks. Also, unlike the Indians, the forwards rotated the ball quite beautifully and constantly kept the rival defence under pressure.

In fact, the Aussies took a while to find their feet as the Indians enjoyed a spell of ascendancy early on. But after weathering the early onslaught, the Aussies gradually got a grip on the proceedings.

The Indian deep defence, under the circumstances, came away with some neat interceptions to thwart the Aussies. Goalkeeper Chauhan too excelled with several good blocks, especially off Brent Livermore.

But a minute from the interval, Grant Schubert capped a left-wing move by Troy Elder whose flick got deflected to him and the Aussie winger made no mistake.

On resumption, Chauhan had plenty to do, taking a rising shot from Elder on his visor after the first attempt had come off the post. But soon after, Chauhan was penalised for squatting on the ball leading to a penalty stroke which Elder converted.

Thus, two goals in as many minutes virtually killed the Indian challenge. Though Dilip Tirkey reduced the margin, the Aussies struck again through Schubert who flat-sticked a Troy Elder pass.

India, who will be facing Argentina tomorrow, need to win their next two matches to have some hope of making it to the final of the tournament.

Later in the day, Kashif Jawad scored a spectacular goal six minutes before the hooter as Pakistan twice came from behind to hold Holland 2-2 in a league match.

Teun de Nooijer and Taeke Taekema sounded the board for the defending champions while Sohail Abbas scored the other goal for Pakistan.

The Asian side, which garnered a point from the draw, moved to the second position in the points table behind the hosts, who registered wins in their earlier two matches against India and Australia.

Pakistan, with one win and two draws are on five points while the defending champions have so far accumulated seven points. Australia, are at the third spot with four points.