Listen To The Women

The temptation to credit the AIMPLB with a monopoly over shari'ah-based discourse must be firmly resisted, for it is not a representative body, nor are its views legally enforceable. 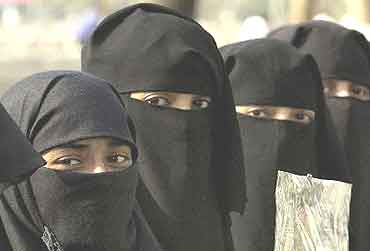 The recent meeting of the All-India Muslim Personal Law Board at Bhopal has once again made it amply evident that many ulama associated with the Board are averse to any basic changes in Muslim Personal Law as it exists today, and which, in several respects, is clearly loaded against Muslim women.

The sharp criticism that the Board has won for itself from progressive Muslim quarters for having sought to legitimize what the latter see as ‘un-Islamic’ patriarchy in the guise of the shari‘ah strikingly highlights the dubious claims of the ulama (as well as Islamist ideologues) that traditional understandings of the shari’ah, as they understand it, has all the answers to humankind’s woes.

If the ulama are unable to agree on precisely what the shari‘ah rules governing relations between the genders should be, is it all surprising that their insistence that genuine peace and prosperity in accordance with God’s will can be secured only through following their version of the shari‘ah has few serious takers?

Mercifully, the ulama associated with the Board do not have a monopoly over shari‘ah-based discourse. Faced with the intransigence of the traditionalist ulama, who consider the centuries-old patriarchal tradition of fiqh or jurisprudence as almost wholly sacrosanct and unchangeable and as representing the normative or divine shari‘ah, a small and growing number of Indian Muslim women have begun to take on the ulama on their own turf.

They have taken to studying Islam themselves, going back to the Qur’an and by-passing the fiqh tradition which they see as having denied them of the rights that the Qur’an has provided them. In the process they are developing new, more gender-just notions of Islam and the shari‘ah that critique both the claims as well as the authority of the traditionalist ulama and Islamist ideologues.

The Mumbai-based Women’s Research and Action Group (WRAG), a well-known women’s organization, has been in the forefront of this struggle to re-read the Islamic tradition in order to argue the claim for gender equality. It was founded in 1993, in the aftermath of the bloody riots in Mumbai that erupted soon after the demolition of the Babri Masjid, in which several hundred people, mainly Muslims, were killed.

Following the riots, Muslims in Mumbai saw themselves being further ghettoized, forced into separate localities for fear of further attacks by armed Hindu mobs. And, as a WRAG leaflet puts it, Muslim women, who were ‘subordinated by the politics of gender, identity and personal laws, were further disadvantaged as they faced oppression from within and outside the community’. It was in this context that WRAG was formed to help women, particularly Muslim women, struggle for their rights.

Recognising the limits of middle-class secular feminism, WRAG has been involved in promoting a form of Islamic feminism for Muslim women in India. In this regard it has published a number of booklets meant for popular consumption, seeking to offer a women’s-friendly interpretation of the shari‘ah and critiquing the patriarchal understanding of the shari‘ah furiously championed by the All India Muslim Personal Law Board, the majority of the traditionalist ulama as well as Islamist groups such as the Jama‘at-i Islami.

WRAG’s well-researched literature sheds desperately needed light on the contentious issues involved in the on-going debates about the shari‘ah. In its booklet ‘History of the Development of Islamic Law’, it shows how the initial egalitarian thrust of the Qur’an came to be overshadowed over the centuries with the emergence of different schools of fiqh. These schools developed in a feudal and patriarchal society and it was inevitable that they should bear the imprint of their social context. Muslims today, however, it argues, need not be bound by the precedent established by the fiqh schools but, instead, should return to the Qur’an for guidance.

In two other booklets, ‘Laws Governing the Muslim Community’ and ‘Understanding and Interpretation of Qur’anic Verses on Divorce’ WRAG argues that  Qur’anic verses with clear legal import, such as those dealing with divorce, need to be understood contextually and historically, rather than simply literally. If the intention of the Qur’anic laws was to gradually establish the principle of gender justice, it suggests, this calls for new interpretations of these laws in order to meet that mandate in today’s very different context. Obviously such a suggestion is complete anathema to the traditionalists and the Islamists.

WRAG’s approach to Islamic gender justice, as reflected in its literature, is rooted in a particular way of reading the Islamic scriptural resources. It hardly refers to the Hadith, the corpus of saying believed by many Muslims to have been uttered by the Prophet Muhammad, presumably because a large number of these sayings are simply concocted and therefore unreliable, and also because many of them unambiguously justify women’s subordination. Likewise, the opinions of the schools of fiqh are also rarely referred to, because the schools reflect a similar patriarchal ethos. Instead, it goes back to the Qur’an, seeking Qur’anic sanction for its project of women’s emancipation.

This strategy of reading the Qur’an in support of a gender-just understanding of Islam is well-illustrated in a recent WRAG publication by Noorjehan Safia Niaz titled ‘Maintenance After Divorce: A Major Concern of Muslim Women’. Much of the ongoing debate on the Muslim Personal Law centres on the appropriate method of divorce and the rights of divorced women.

While the Board continues to insist on the legitimacy of the method of divorcing by pronouncing the world talaq thrice in one sitting (although it has been forced to admit that this method is not the most appropriate one) and limits maintenance rights for divorced women to just three months, Niaz reads the Qur’an to come up with startlingly different conclusions.

Noting that the Qur’an clearly specifies that divorced women should be given a gift according to the husband’s means, Niaz argues that the traditional notion of maintenance for only a short period must be revised in order to relate to the Indian context. She writes that while in seventh century Arabia a divorced woman could easily get remarried and so they were generally provided post-divorce maintenance for only a few months, this is not the case in India because of widespread prejudice against marrying divorcees. Indeed, many divorced women may not want to remarry or may not be able to remarry if they are divorced at an age when remarriage is not a viable option. Hence, Niaz says, the relevant Qur’anic verse ‘must be interpreted in the context of Indian society’ so that divorced women are maintained by their husbands till such time as they can ‘work out an alternative’.

To further bolster her argument Niaz notes that in the Qur’an (2:241) the requirement of paying post-divorce maintenance to the divorced wife does not specify any period or amount. Yet, she says, the conservative ulama insist that such women not be given maintenance after the ‘idda period, generally three months, following divorce. Because of this, many divorced women are left with no means to fend for themselves, many being driven into destitution and even prostitution.

Niaz castigates the conservative ulama for ‘ignor[ing] the harsh reality facing women’ and for ‘allow[ing] men to evade their social responsibility’. Countering the oft-heard argument that the mehr or dower that she is given by her husband is an adequate payment for the divorced woman after maintenance, Niaz argues that ‘mehr is the right of women at the time of nikah [marriage] and not divorce’ and hence that ‘mehr should not be linked to divorce’.

To deny a divorced woman maintenance after the ‘idda period, she claims, is to deny her any compensation for the years of domestic work and ‘hidden labour’ that she has undertaken while the marriage lasted. Consequently, she argues, a divorced woman must also be given an adequate share in the assets accumulated by the family. In this regard she critiques the Muslim Women (Protection on Divorce) Act, passed in 1986 in the wake of the Shah Bano controversy, for having taken away the rights to maintenance after the ‘idda period that divorced Muslim women enjoyed.

To further back up her argument for adequate maintenance of a divorced woman after the ‘idda period Niaz discusses the term mata‘a, or consolatory gift or compensation. Referring to this the Qur’an says, ‘For divorced women maintenance should be provided on a reasonable scale’. Noting that the amount of mata‘a is left unspecified, Niaz interprets the line to make for adequate maintenance for the divorced woman even after the period of ‘idda is over, clearly opposing the traditionalist ulama’s understanding of the term. She laments that while  many Muslim countries have provision for mata‘a for divorced Muslim women this is not the case in India, presumably because of the opposition to this on the part of the conservative ulama and what she calls ‘Muslim fundamentalists’.

In the ongoing and seemingly endless debates on Muslim Personal Law, voices such as those of the Muslim women associated with WRAG desperately need to be heard. The temptation to credit the Board with a monopoly over shari‘ah-based discourse must be firmly resisted, for it is not a representative body, and nor are its views legally enforceable. If, as Muslim tradition tells us, the Prophet Muhammad exhorted his followers to learn ‘half the faith’ from his wife Ayesha, there is no reason why we should not be listening to what a new breed of Muslim women scholar-activists, such as Niaz, have to say about their own religion.

Yoginder Sikand is the author of Sacred Spaces: Exploring Traditions of Shared Faith in India and Inter-Religious Dialogue and Liberation Theology: Interviews with Indian Theologians and Activists

The Board Of No Shame!