One participant in the Outlook-Picador contest sent in two pieces, and the jury was impressed enough with both to have them included in the final shortlist. 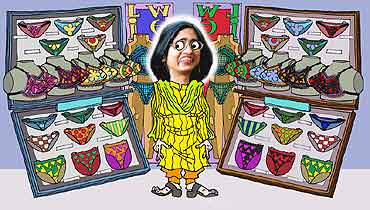 outlookindia.com
-0001-11-30T00:00:00+05:53
There is nothing sadder in the whole world than having stashes of gorgeous, lacy black lingerie, saved up for a long-awaited occasion that never seems to arrive. There is a deep reluctance to ferret out any of it merely for daily use. And on the rare occasions you wear some, entertaining possibilities, perhaps a late night out -- when you wash it and carefully put it back (in the corner reserved for pretty foreign lingerie, not to be trespassed upon by the daily, sensible, unlacy stuff), it is always with shoulders bowed with defeat.

My collection grew largely out of my lingerie explorations in Paris. Partly, it was to do with an awakening sense of the beauty of my body, which I had scarcely regarded at length, let alone admired, before Europe radically transformed some of my perspectives. And it felt nice complementing my body with all kinds of sweet-nothings in satin and lace.

But, to be honest, it was also partly because I was under oath. A close friend, who swore by St Michael, had made me promise that I would treat myself to his latest line. I mean, I can appreciate Benedictine, that divine liqueur apparently made to the recipe of monks of the St Benedict order. But St Michael lingerie? Is he the patron saint of bras and panties? And if not, don't these saints have veto powers or something? The most liberal saints might draw the line at pushing undies, but I didn't get the feeling that Western civilisation was unduly troubled by such niceties.

So one day I braced myself for an Undie Mission. I've never been comfortable buying underwear. This has largely to do with the fact that, for some reason that remains an eternal mystery, women's underwear shops in India are almost invariably manned by men. And not men who will ask you your size in a discreet whisper. They are usually large, swarthy men with hairy bear paws for hands, their shirt buttons open half-way down to their sweaty navels, since they mostly function out of tiny, airless shops in enormously crowded shopping complexes. (Here we're discounting those peripatetic vendors who throng outside railway stations like Victoria Terminus or Dadar in Bombay, with cheap, radioactively-coloured bras dangling from the tips of their umbrella ribs, a sort of kitschy bramobile that, in England, would be instantly given the Turner Prize).

When you look around in one of the regular shops a bit, the shopkeeper leans over semi-leerily and bellows, "Kya number?" (What number?) You stare at your toes as you mumble, "Size 30." "Kya? Thirty?" he sneers. "Thirty!? Dekhna padega." (What? 30!? We'll have to see.) Then, looking up at a face in a hole in the mezzanine loft above, he shouts, "Arre, zara 30 hai to phekna." (Hey, throw me a 30 if you can find it). He employs the same functional volume and tone he would use, if the wanted a basket of fish heaved across to him. Given your luck, the guy in the left announces slyly, "30 running item nahin hai na, to companyne banana chhod diya. 32 try karoge?" (30 isn't a running item, no, so the company's stopped making it. Want to try a 32?) Before you can answer, 32s come raining down in yellowing cardboard boxes. As several lady customers cluck sympathetically at the luckless size 30er, you just want to disappear in a hole in the ground.

I imagine men buying condoms at the chemist's feeling likewise. Sure, there must be those who look chermists straight in the eye, thump the counter glass and demand an Ecstasy or whatever.But many Indian men, I believe, first buy a disarming Vicks Inhaler or Iodex, and casually add that they'd like a pack of Kohinoor, eyes glued to some fascinating new Bandaid shapes under the counter glass. The chemist turns to his minion in the left and roads, "Arre Kohinoor pheko" (Hey, throw me a Kohinoor). The minion shouts, "Kohinoor khatam. Climax ya Dream Baby chalega?" (We are out of Kohinoors. Will Climax or Dream Baby do?)

"No, no," the customer squirms, "How much for the Vicks?" Whereupon the minion sweetly twists the knife in the wound, "Bolo teen Dream baby liya to free plastic razor milega." (Tell him, with three dream Baby packs, he will get a plastic razor free.) Only to find that the beetroot customer has vanished without collecting his change for Rs. 100 for a stupid inhaler he didn't want in  the first place. But I digress.

So there I was, at the enormous Printemps department store in the heart of Paris, discovering that I couldn't just walk in and buy a bra. They had an entire overwhelming floor devoted to lingerie. At its entrance, stood the presenter of a TV show -- apparently sponsored by a lingerie company -- giving away free bras during an on-the-spot quiz for shoppers, asking such nail-biting questions as, "And 'oo is the president of France. madame?" Suddenly, he turned towards me. I stood transfixed for a few seconds, before dashing down the elevator. If I felt squeamish as a woman, having to buy underwear from creepy crawlies back in India. Paris, the sophisticated hub of the lingerie universe, was no different -- its lingerie pushers were brasher than any that made me turn beetroot in India.

I returned when the coast was clear, and was hugely relieved to notice saleswomen behind the counters. Moreover, coming from Bombay, where you would be lucky to find a handful of bras that would interest you, this was some kind of mind-boggling Bratopia. They had bras that were lacy, satiny, cottony, nylony, velvety, mono-coloured, skin-coloured, fluorescent, floral, polka-dotted, see-through, high-cut, low-cut, bikini-cut, halter-necked, strappy, strapless, cross-strapped, stretchable and with sponge padding. There were Wonderbras, Day-glo bras, baby-nursing bras, sports bras...If I'd looked keenly, I'm certain I would have found cooking bras, swimming bras, lawn-mowing bras, kid's homework bras, Sunday service bras, first-night out bras, one-night stand bras, to-hell-with-him bras and don't-need-men-in-my-life bras.

Each bra was tagged with tons of literature about `lift' and `supports' and `suspension', making something so delicately private sound rather like a structural engineers tender for a steel bridge across a gorge. Very un-French, I thought. Indeed, the French, who have gifted the world the world `brassiere'. themselves refer to it in the most unromantic fashion as `soutien-gorge' (support-bosom).

For me, the bra is an extremely personal garment, and the very notion of having a man choose it for me makes me blush violently. But I spotted an Indian man shopping earnestly amidst the lingerie prairie. He seemed a middle-aged Bengali bureaucrat at the end of his Paris posting, and an anticipatory smile lit up his face now and then, as he imagined his wife's delighted squeals at his outre choices. It was a lovely divertissement, listening to him speak fluent French with a thick Bengali accent, as he demanded to see more varieties in size 36 with C cups and black lace. Stretching the bras this way and that to check that they worked, he triumphantly wheeled out a large trolleyful.

The general attitude of the men in the room seemed to be, that the only reason women would visit the lingerie department of a Parisian store, was to appear sexy to their men in bed, so it was a complete waste of time bothering with what the women liked. There were Arab women in black burqas, whose husbands matter-of-factly imposed their own choices, by the simple expedient of taking a clutch of shiny things to the salesgirl and asking her to make the bill. Naturally, when the six-foot, blond Scandinavian hunk, burping his baby, casually wandered into the women's trial cabins looking for his wife - with his Wonderbra suggestions dangling over his free shoulder - the two Arab women bold enough to try on their own preferences, screamed blue murder.

At the end of a long afternoon, hugely entertained by the clash of civilisations in bradom, I eventually felt obliged to look for a bra for myself. I told the salesgirl I wasn't sure of the European equivalent of my size, so she despatched me to the Senior Bra Advisor. The old lady took one glance at my breasts, announced 30AA or 32A with impressive assurance, and jotted it down for me in a little ivory card marked Personally Yours. I thought her eyebrows had arched just a tad too rudely as she made her pronouncement, but I wasn't sure if it technically qualified as a sneer. I suspect people all over the world are condescending towards size 30, and Paris was no exception. I've never discovered how other women seem to go from being unprepossessing teenagers, directly to size 36 without ever passing 30, going by the mini-rack you see in 30 and floorfuls you see in 36. It always reminds me of that move when you play Monopoly, which goes something like `Do not stop. Proceed directly to Piccadilly Circus. Collect 20 pounds.'

Mercifully, they had some really charming confections in size 30. Each St Michael bra I bought had a silky tag with UK/Can 32A, Eur 70A, Fr 85A attached to it. My bra size sounded vastly more impressive in French, though why it should be reduced to less than half by simply travelling from Paris to an island three Chunnel hours away, was beyond me. I was even foggier about how I could be one size in Fr and another size in Eur, but geography was never my strong point, and I supposed Senior Bra Advisors were paid fat salaries to crack precisely these mysterious algorithms of bra sizes.

I bought armfuls of lingerie at Printemps, and even more later, in other European capitals. As the lacy stash rises in my cupboard, I linger over it now and then, expectation welling in my heart.

(Meenakshi Shedde, Assistant Editor and Film Critic of The Times of India, Bombay, won the National Award for Best Film Critic of 1998. She has served on the juries of several international film festivals in India and Europe, including Cannes, Berlin, Oberhausen, Hannover and Mumbai. She has contributed to a book And Who Will Make the Chapatis? This is an extract from a travel book she is writing.)