It must be the rarefied air at those heights and the breathtaking view of mountains and valleys, not just of the sort you'd normally imagine, on a Delhi-Leh flight that left our travelling friend gasping for breath... 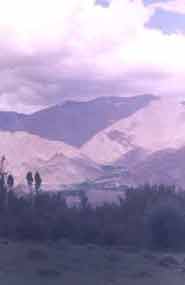 About halfway into the short-haul Delhi-Leh flight, I realised that I had picked a seat in the wrong half of the aircraft. An inadequate understanding of the Himalayan topography and of flight paths had led me to demand a right-side seat in the belief that it would offer the more spectacular views of snow-capped peaks. But the frequent, excited exclamations from the left were audible proof of just how wrong I’d been.

Dejected, I sought solace in the rather less enchanting sights on my side - and in some frothy banter with the extravagantly endowed young woman seated beside me. Annika, from Germany, was wearing a lacy top with a neckline so low she was at serious risk of tripping on it; I noted with satisfaction that her Alpine assets were only marginally less Himalayan than the glacial peaks outside. She said she was heading for Ladakh to "do the Buddha circuit" - and, hopefully, "to steal some pure Aryan seed".

She then made what I thought were discreet enquiries into my lineage. I told her, with a suitably leery expression, that although in genetic terms I was something of a mongrel - and decidedly Dravidian - I was highly amenable to having my seed stolen. For some unfathomable (but possibly racist) reason, however, Annika declined my gallant offer.

On Day One in Leh, my kindly hostess forbade me from stirring out for fear of being laid low by altitude sickness. My feeble protestations on the ground that my constitution was more than ordinarily robust were countered by a grim chronicling of people who had paid with their lives for failing to acclimatise adequately. Grounded, I drank in the laid-back Ladakhi atmosphere countless cups of gurgur tea, a Tibetan concoction in which tea, salt, milk and butter are blended using a cylindrical wooden churn. From my room window, I watched heavy-breathing foreigners pound the pathways in preparation for the Great Tibet Marathon, the world’s first high-altitude long-distance race.

The rarefied desert atmosphere is so dry and so still that you can hear the crackle of static as you comb your hair. More seriously, there is a risk of dehydration, so it’s critical to imbibe gallons of fluids. And given the low levels of oxygen in the air, every breath you take is a strain. Even Chief Minister Mufti Mohammed Sayeed, who drove up from Srinagar to Leh to attend an education seminar and inaugurate a bank branch, needed a blast of oxygen from a cylinder, in public.

The Ladakhi language, notes eminent linguist Helena Norberg-Hodge in her definitive work Ancient Futures: Learning from Ladakh, places a great emphasis on relativity: it obliges one to express the context of what one is trying to say. The verb ‘to be’, she records, has more than 20 variations, which are invoked depending on the specifics of the situation - in particular, on the relative intimacy of the speaker and the listener with the subject matter.

Additionally, the choice of words to describe an object is governed by protocol. Tea is chah when it is offered to a social equal (a peer or someone of the same age) but is solja when it is respectfully offered (say, an elder - or even a young first-time visitor). Food is kharji (to an equal) and dontang (to an elder). But none of this compares with the complexity of the terms that siblings invoke to address one another: shinmo (elder brother to sister), nono (brother to brother, or sister to younger brother), mingbo (sister to elder brother), nomo (sister to sister)… and so on.

Yet, for all its richness, the Ladakhi language can on occasion be highly economical, even spartan. The traditional Ladakhi greeting, a hearty "Julley!", may mean anything from "hello" to "welcome" to "goodbye". Said with a beaming smile, it can encapsulate rather more complex ideas as well: "Why don’t you come into my Tibetan knick-knack shop and let me fleece you?" Or "I know you’re being hospitable, but I can’t bear to drink any more of this gurgur tea." Or - one that we frequently invoked - "A thousand apologies for thieving those luscious apricots from your tree."

Lifestyle choices in Leh, which receives only 8 cm of rain a year, reflect a rare sensitivity to the climatic peculiarities of the region. To this day, most houses are built with sun-baked mud bricks. And the traditional Ladakhi toilets are dry-closet pit latrines: you ascend a few steps to enter a mezzanine-level enclosure with nothing more than a hole in the ground. To one side is a mound of sand and a shovel. The newspapers I found tucked away were intended not as toilet-time reading, but as tissue to wipe oneself with once alimentary activities have been satisfactorily accomplished. At the end of the mission, you shovel heaps of sand into the hole and cover up your dirty deed. In the absence of water, the refuse, which collects in a ground-level enclosure right below the sandy throne, does not rot or smell. Every few months, the sand-mixed refuse is emptied out and used as manure. Perhaps it was my lively imagination, but I thought the green apples from the tree right next to the toilet were distinctly sweeter.

One For The Road 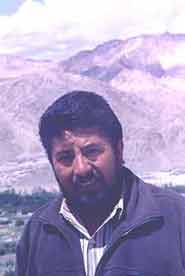 The extensive network of roads, including the famed Jalebi bends, built by the Border Roads Organisation in the Himalayan heights are marvels in macadam. (However, the BRO’s kitschy roadside slogans - "After whisky, driving risky", "If you are married, divorce speed" -- are enough to drive you round the bend.) But as Mohammed Yousuf, who ferried us to Khardong La, said, Ladakh has only its proximity to Pakistan and China to thank for this, else would anyone have cared for this desolate cold desert? The first stretch of horrendous roads I encountered in a week was after touchdown in Delhi, on Aurobindo Marg beyond the Adchini traffic light.

Admittedly, it’s a long way from either China or Pakistan.

The Many Faces Of Evil