Lee has played 13 matches in at first-class level in which he has scored 490 runs at an average of 30.62 to go with three half-centuries. 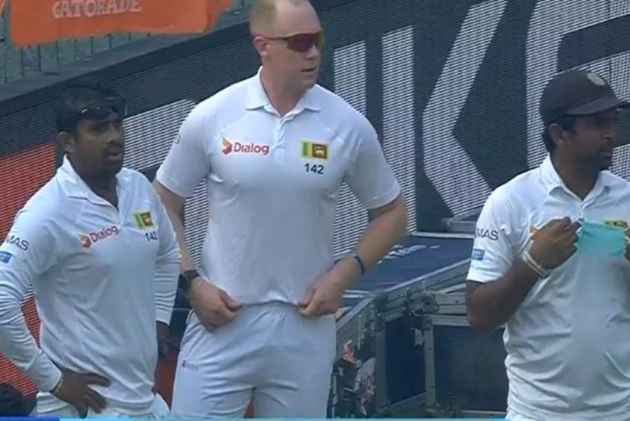 It was a day full of drama at Delhi’s Feroz Shah Kotla Stadium after Sri Lankan cricket team held up proceedings in the third Test against India complaining of poor air quality.

It was first such incident in the 140-year-history of Test cricket, when an international team wore anti-pollution masks while fielding and then refused to continue. The match was stopped for 26 minutes on three occasions.

Meanwhile, Sri Lankan team's trainer Nick Lee was almost ready to get onto the field after Sri Lanka were left with only 10 fit fielders. The players were finding it difficult to stay out in the middle especially bowlers, Suranga Lakmal and Lahiru Gamage who left the field after they complained of uneasiness.

However, Lee didn't get a chance to play as Kohli declared the innings.

Lee has played first-class cricket for the teams such as Bedfordshire, Cambridge MCCU, Suffolk, Sussex 2nd XI in England. He was part of Bedfordshire in 2015 and since then hasn’t played any competitive cricket.

He has played 13 matches in at first-class level in which he has scored 490 runs at an average of 30.62 to go with three half-centuries.

The Lankan players were booed by a 20,000 strong crowd, chanting “losers losers” as the players from the island nation retreated to the dressing room.

Interestingly, when Indian team under Kohli took the field, none of the players wore anti-pollution masks.

According to Central Pollution Control Board (CPCB), Delhi’s air quality has been rated as ‘very poor’.

The CPCB states: "Exposure to such air for a prolonged period can trigger respiratory illness. The most dominant pollutants are PM2.5 and PM10. These are ultrafine particulates, which can measure up to 30 times finer than the width of a human hair. The concentration of PM2.5 and PM10 were 223 and 383 micrograms per cubic metre at 1pm today afternoon. The corresponding 24-hour prescribed standards are 60 and 100."

The ICC may not get into the issues pertaining to bilateral series is prerogative of both boards.

BCCI acting president CK Khanna said, "If 20,000 people in the stands did not have problem and the Indian team did not face any issue, I wonder why Sri Lankan team made a big fuss. I will need to talk to the secretary and ask him to write to the Sri Lanka Cricket."
Sri Lankan players halted the proceedings thrice – between 12:32 to 12:49 for 17 minutes after which they were convinced to start proceedings.
Their pacer Lahiru Gamage, who complained of uneasiness immediately got rid of Ravichandran Ashwin in the 125th over but again felt unwell. He was taken off the field with Suranga Lakmal completing his over.
The next break happened between 1:14 and 1:19 pm when Lankan manager Asanka Gurusinha and Indian coach Ravi Shastri came out with contrasting requests.
It was the third stoppage at 1:28 pm that led Kohli to declare the innings as fielders refused to carry on.
Smog is a very common phenomenon in Delhi as farmers in the adjoining states of Punjab and Haryana burn crops during the end of October and November.