With the arrest of Tariq Dar, alleged to be a member of the Pakistan-based Lashkar-e-Toiba, Delhi Police claims to have cracked the Delhi serial blasts case: What's behind the Lashkar's designs of exporting terror beyond Kashmir into the rest of the 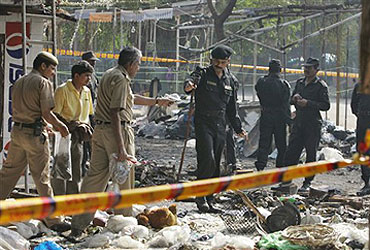 outlookindia.com
-0001-11-30T00:00:00+05:53
With the arrest of Tariq Dar, alleged to be a member of the Pakistan-based Lashkar-e-Toiba, Delhi Police claims to have cracked the Delhi serial blasts case, the worst-ever terrorist attack in the national capital. Ruthless terror is the hallmark of the Lashkar, fired as it is by an irrepressible hatred of non-Muslims, whom it sees as, by definition, anti-Islam.

The Lashkar is the armed wing of the Markaz Dawat wal Irshad ('Centre for Invitation and Instruction'), an organisation affiliated to the Ahl-i Hadith sect, which follows a version of Islam almost identical with that of the Saudi Wahhabis. It is today the single most powerful militant outfit operating in Kashmir. Its involvement in Kashmir goes back to the early 1990s, when Pakistan began patronising radical Islamist outfits to counter the influence of the Jammu and Kashmir Liberation Front which had inaugurated the armed uprising against Indian rule. The Front’s agenda of an independent and secular Kashmir was clearly not to the liking of the Pakistani establishment, who saw in radical Islamist outfits a more reliable ally, with their opposition to Kashmiri nationalism and their advocacy of Kashmir’s union with Pakistan. In setting up the Lashkar the late Abdullah Azam a close aide of Osama bin Laden, then associated with the International Islamic University, Islamabad, also played a key role. Funds for the organization are said to have come from Saudi Arabia and Pakistan's secret services agency, the Inter Services Intelligence.

Like other radical Islamist outfits, the Lashkar sees Islam as a perfect, all- embracing system. Islam is said to govern all aspects life in the form of the shari'ah. For the establishing of an Islamic system an Islamic state is seen as necessary in order to impose the shar'iah as the law of the land. If such a state were to be set up and all Muslims were to live strictly according to 'the laws that Allah has laid down', then, the Lashkar argues, 'they would be able to control the whole world and exercise their supremacy'. Since Muslims throughout the world are members of a global ummah, the Lashkar insists that there should be a single global Islamic state with one Caliph ruling over all the faithful.

The struggle for the establishment of the Islamic state can take various forms, peaceful as well as violent. Islam, the Lashkar says, is 'a religion of peace and harmony', and seeks to 'eliminate mischief and disorder, and to provide peace, not only to Muslims but also to the entire humanity'. However, it stresses, Muslims are commanded to take to armed struggle, or jihad, to defend their co-religionists suffering from the oppression of others. As the Lashkar sees it, such a situation is said to prevail over much of the world today. While jihad in defence of Islam and of Muslims labouring under oppression is presented as a liberation struggle, it is also seen as a means for Islam to 'prevail on this earth', for Islam is seen as the only true religion. Armed jihad must continue, the Lashkar insists, 'until Islam, as a way of life, dominates the whole world and until Allah's law is enforced everywhere in the world'. Since Islam is meant for all peoples, the Islamic State must spearhead a movement to spread Islam all over the world, so the Lashkar believes. In the course of this struggle, it is expected that it will encounter conflict with other states and their ideologies. The conflict can be resolved through peaceful diplomacy, but, if that fails, then, the Lashkar argues, the only course left open is armed jihad. In this sense, the Lashkar believes, jihad is 'the foreign policy' of the Islamic State.

The subject of armed jihad runs right through the writings and pronouncements of the Lashkar and is, in fact, the most prominent theme in its discourse although it has traditionally not been included as one of the 'five pillars' of the faith. Indeed, the Lashkar’s understanding of Islam maybe seen as determined almost wholly by this preoccupation, so much so that its reading of Islam seems to be a product of its own political project. In the writings and speeches of Lashkar spokesmen jihad appears as violent conflict waged against 'unbelievers' who are said to be responsible for the oppression of the Muslims. The Lashkar claims that 'There is so much emphasis on this subject that some commentators and scholars of the Quran have remarked that the topic of the Quran is jihad’.

The global jihadist programme of the Lashkar presents itself as a 'liberationist' project, basing itself on widespread feelings of discontent and suffering among many Muslims. 'All Muslims', the Lashkar believes, are oppressed today, by such 'enemies' as the Hindus, the Jews and Christians. 'Wherever you look, you will find that non-believers are everywhere trying to enslave Muslims and destroy them', it argues. Hence, it says, Muslims must form a 'solid bloc' to defend themselves from these 'enemies', and if all peaceful means fail they must resort to armed jihad for their liberation. This Muslim bloc, it suggests, should be led by both Pakistan and Saudi Arabia, and have its headquarters at Mecca.

The Lashkar sees jihad as the secret of Muslim power in the past when much of the known world was under Muslim rule, and it is argued that when Muslims 'abandoned jihad and other injunctions they began to degenerate'. In Lashkar discourse, jihad is projected as a religious duty binding on all Muslims today. Thus, it is claimed that the prevailing global situation warrants all Muslims to be involved in some way or the other in jihad against non-Muslim 'oppressors'. In this grand enterprise there are different roles for different people to play. Muslims are promised that they would receive great rewards, both in this world and in the Hereafter, if they were to actively struggle in the path of jihad. Not only would they be guaranteed a place in Heaven, but they would also 'be honoured in this world', for jihad is, according to a Lashkar spokesman, also 'the way that solves financial and political problems'.

The Lashkar sees its involvement in the armed struggle in Kashmir as only one stage of a global jihad against the forces of ‘disbelief’, stopping at nothing short of the conquest of the entire world. As Qari Abdul Wahid, former amir of the Lashkar in Indian-administered Kashmir, puts it, 'We will uphold the flag of freedom and Islam through jihad not only in Kashmir but in the whole world’. Likewise, Nazir Ahmed, in-charge of the public relations department of the Markaz, the Lashkar’s parent body, declares that through the jihad that the mujahidin have launched in Kashmir, 'Islam will be dominant all over the world, Inshallah (God willing)’.

In Lashkar discourse the conflict in Kashmir is seen not as a territorial dispute between India and Pakistan, but as nothing less than a war between two different and mutually opposed ideologies: Islam, on the one hand, and disbelief, on the other. This is portrayed as one chapter in a long a struggle between the two that is said to have characterised the history of Hindu-Muslim relations for the last 1400 years ever since the advent of the Prophet Muhammad. The Prophet is claimed to have singled out India as a special target for jihad, or so the Lashkar insists. 'Whosoever will take part in jihad against India', Lashkar leader Muhammad Ibrahim Salaf claims that the Prophet had declared, 'Allah will set him free from the pyre of hell'.

The Lashkar sees the roots of the Kashmir problem as lying in its Muslim rulers having been replaced, first by the Sikhs and then by the Hindu Dogras through British assistance. With India (the 'Hindus') having taken over Kashmir in 1947, a long reign of bloody terror is said to have been unleashed on the Kashmiri Muslims. This is seen as a direct and logical consequence of the teachings of Hinduism itself, because, it is alleged, 'the Hindus have no compassion in their religion'. Hence, the Lashkar argues, it is the duty of Muslims to wage jihad against the 'Hindu oppressors', for, it insists, 'it is the Hindu who is a terrorist'. All Hindus are tarred with the same brush, described in such essentialist terms as 'terrorists', 'traitors', 'cowards', 'enemies', etc.. Thus, Lashkar chief Hafiz Muhammad Saeed declares, 'In fact, the Hindu is a mean enemy and the proper way to deal with him is the one adopted by our forefathers, who crushed them by force. We need to do the same'.

India is a special target for the Lashkar. As Hafiz Muhammad Saeed argues, 'The jihad is not about Kashmir only. It encompasses all of India'. The Lashkar sees the jihad as going far beyond the borders of Kashmir and spreading through all of India. The final goal is to extend Muslim control over what is seen as having once been Muslim land, and, hence, to be brought back under Muslim domination, creating what the Lashkar calls 'the Greater Pakistan by dint of jihad’. Thus, at a mammoth congregation in November 1999, Hafiz Muhammad Saeed declared, 'Today I announce the break-up of India, Inshallah. We will not rest until the whole of India is dissolved into Pakistan'. On the same occasion, Amir Hamza, senior Lashkar official and editor of its Urdu organ, ad-Da'wa, thundered: 'We ought to disintegrate India and even wipe India out'. Those who take part in this anti-Indian jihad are promised that 'Allah will save [them] from the pyre of hell', and 'huge palaces in paradise' await those who are killed in fighting the 'disbelieving enemies'.

If indeed the Lashkar was behind the Delhi blasts, it indicates that these bombastic anti-Indian and anti-Hindu appeals of the Lashkar are no empty rhetoric and that it is deadly serious about its designs of exporting terror beyond Kashmir into the rest of the country, inflaming Hindu-Muslim conflict and making the solution to the Kashmir dispute even more intractable.

Quotations used in this article have been taken from the official website of the Markaz Dawat wal Irshad/Lashkar-i Tayyeba, which has been shifted after 11 September, 2001 to an unknown location on the World Wide Web. Yoginder Sikand is the author of Sacred Spaces: Exploring Traditions of Shared Faith in India and Inter-Religious Dialogue and Liberation Theology: Interviews with Indian Theologians and Activists