Beneath that veneer of sophistication, the average Bengali is as communal and parochial as Raj Thackeray and his goons. But, while Raj & Co have the courage to speak their minds, the Bengalis would try and couch their racism in sophisticated language 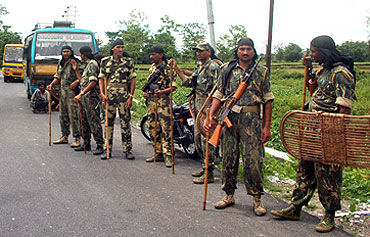 True Colours
A person's, group's, party's or community's true colours come out in times of crises. Faced with sudden and unprecedented opposition in Nandigram, the CPI(M) deployed its armed cadres to quash the revolt. Buddhadeb Bhattacharjee bares his fangs whenever he's angry or upset. And now that the Gorkhas have started demanding a separate state comprising large and scenic tracts of North Bengal, the oh-so-bhadralok Bengalis who love to call themselves tolerant, egalitarian and broad-minded have turned abusive, bigoted, parochial and provincial. Which just goes to prove that beneath that veneer of sophistication, the average Bengali is as communal and parochial as Raj Thackeray and his goons. Difference is, Raj & Co have the courage to speak their minds while the Bengalis would try and couch their racism in sophisticated language. But the stalwarts that Bengal produced decades ago were far from bigoted and prejudiced. Tagore spoke of opening minds and Vivekananda about all religions being equal. It is so unfortunate that those who swear by Tagore and Swamiji today don't know anything about the lives and teachings of those great personas and prefer, instead, to go the way of the Thackerays.

Marxist Duplicity
To a Marxist, or a Communist, 'preserving the contours of a state' (as a resolution introduced by the Chief Minister at the all-party meeting earlier this week said) shouldn't be important at all. Communism is all about lofty (albeit unattainable and impractical, but that's another matter) principles where ideology, and not man-made political boundaries or contours, is of primary importance. Emancipation is important, as is empowerment. Marxists profess empathy for the poor and marginalized and claim to work for their interests. Buddhadeb Bhattacharjee and his comrades ought to, then, be the strongest advocates of the Gorkhas who are perhaps the poorest, the most neglected and the most backward among all communities in Bengal. They lag behind the rest of Bengal, of which they're unwilling citizens, in most human development indices; decades of neglect and discrimination have left the Gorkhas angry, frustrated and desperate. But Bhattacharjee & Co will not champion their cause. The reason being that Bengal's ruling Marxists are Bengalis first and Marxists later. That is why, incidentally, the comrades in the hills broke away from their parent party during the Gorkhaland movement two decades ago to form the Communist Party of Revolutionary Marxists (CPRM). I remember a CPRM leader telling me a few years ago that the then CM Jyoti Basu's approach to tackling the Gorkhaland movement was extremely racist and parochial and that hurt and distressed Darjeeling's Marxists so much that they broke away from the parent party, something committed Communists rarely do.

CPI(M)'s Role
Two decades have elapsed, but if anything, the CPI(M) has become more Bengali than ever. The party has been accused, and evidence of this has surfaced, of propping the 'Amra Bangali', a community-based extremist group. The Jana Jagaran Mancha, another organization formed to counter the Gorkhaland demand and stoke the latent parochialism among Bengalis, has overt links with the CPI(M) and its affiliates. The CPI(M), by backing these two organizations, shamelessly played the communal card. Its objective was to provoke a backlash against the Gorkha Janamukti Morcha (which is spearheading the Gorkhaland movement) by Bengalis residing in Siliguri, which is the gateway to the Darjeeling Hills and Sikkim. The CPI(M) succeeded in doing so and when activists of the Mancha (many were also members of the DYFI) stopped traders in Siliguri from sending commodities to the hills in a bid to impose an economic blockade against the Gorkhas, the sinister gameplan was laid bare. It was very simple—show the Gorkhas that they're dependant on Bengalis who can choke supplies to the hills and, hence, the Gorkhas shouldn't dare to demand a separate state. When senior CPI(M) leaders like Transport Minister Subhas Chakraborty endorse such shameful and condemnable tactics, it is all too apparent that such evil strategies had the sanction of Bengali Marxists. Fortunately, this gameplan has now been abandoned, but only because it threatened to spiral out of control and result in a full-blown communal riot between Bengalis and Gorkhas in Siliguri last week.

Gorkhas' Anger
Apart from the neglect, mistreatment and discrimination that the Gorkhas have suffered at the hands of successive governments in Bengal, particularly the CPI(M)-led Left Front in the last three decades, what has led to complete alienation is the blind eye that the state government turned to the misdeeds of Ghising as head of the Darjeeling Gorkha Hill Council (DGHC). Ghising, a whimsical and unstable man at best, made a mess of the development process in the hills. Corruption was widespread and all financial and administrative norms were thrown to the winds. Funds meant for vital works were siphoned off or left unutilized. Ghising treated the DGHC as his own personal fief and acted like the king of the hills. Thanks to the muscle power of Ghising's Gorkha National Liberation Front (GNLF), the people of the hills couldn't raise their voices against Ghising's misdeeds, corruption in the DGHC and the appalling lack of development in the hills. But the state government, which knew all that was going on and could have stopped it, did nothing. Why? Because it was not at all concerned about the welfare of the people of the hills, but only with using Ghising to suppress the aspirations of the hill people for a separate state. The Gorkhas' anger was accentuated when the Bengal government tried to push through Ghising's controversial and ill-advised bid to include the DGHC-administered areas within the Sixth Schedule of the Constitution (applicable only to the tribal areas of the country). Since only a little over 19% of Gorkhas (Limbus and Tamangs; Ghising belongs to the Tamang community) are tribals and, with the Sherpas and Lepchas, the tribal population in the hills would be about 32 percent, the Bengal government's backing of the bid was seen as a mischievous attempt to create a tribal-non tribal divide among the people of the hills when no such divide exists at present. But the primary anger is over the state government's inaction over Ghising's misdeeds, for which the hills people suffered terribly all these years.

A Myth
Bengal's rulers, politicians and the Bengalis themselves pretend that the Darjeeling Hills have always been an inalienable part of Bengal. But a peep into history would reveal the fallacy of this stand. Until the early 19th century, the territory that is today the Darjeeling Hills was ruled over by Nepal and Sikkim intermittently. It was very sparsely populated by only Lepchas. In 1828, a few East India Company officers on their way from Bengal to Sikkim halted at what is today Darjeeling town and, taken in by the beauty and climatic conditions there, decided it would serve as a good sanatorium for British soldiers. The Darjeeling hills were thus obtained under a lease negotiated with the Chogyal of Sikkim in 1835. People from Nepal and Sikkim started settling down in the Darjeeling Hills during this period and after the British established their presence there and started tea estates, more people from Nepal started arriving as labourers and tea garden workers. No king or nawab of Bengal ever ruled over or exercised any sort of control over the Darjeeling Hills and certainly, no Bengali ever set foot in the hills till well after the British consolidated their presence there by annexing the territory in 1849 after a dispute with the Chogyal. Darjeeling became part of Bengal only in 1947. So to pretend now that Darjeeling Hills has always been part of Bengal is historically incorrect and morally and ethically wrong and unsustainable. It is thus hilarious that Bengalis from different political parties who met at the invitation of Buddhadeb Bhattacharjee earlier this week passed a resolution which effectively states that 'Gorkhaland' will not be conceded. Who, by the way, are Bengalis to agree to Gorkhaland? Darjeeling Hills belongs to the Gorkhas and Bengal has been ruling over them, rather inefficiently and harshly at that, in an unjustifiable manner. It is high time this injustice is set right and the state of Gorkhaland created.

Some Support
Though most Bengalis consider Gorkhaland an emotive issue and would bristle with rage at any suggestion to carve out a separate state for the Gorkhas, there are some who support the Gorkhas' demand. It is heartening to see that organizations like the Association for Protection of Democratic Rights and a students' body (Independents' Consolidation) that has formed the student's union at the premier Presidency College support the Gorkhaland demand. More Bengalis ought to support this demand for their own good. Bengalis ought to realise that the Darjeeling Hills were never part of Bengal, that the Gorkhas have been discriminated against all these years and they want their own state in an area they have been dwelling in for at least two hundred years. Happy Gorkhas in Gorkhaland are any day better for Bengalis than angry Gorkhas in Bengal. This simple logic can't, surely, be missed by Bengalis who boast of their intellect?