That's how jubilant Congress activists are describing Manmohan Singh. But while he has most certainly won his political spurs, the taint of deals behind the deal would haunt him and his government.

More from Smita Gupta
View All

Prime Minister Manmohan Singh finally won his political spurs on July 22, a day of dramatic highs and lows. After weeks of political uncertainty, charges of horse trading, and a last minute effort by the opposition BJP to undermine the Congress' credibility by accusing it of trying to "buy" its MPs' votes, he won a confidence vote by a convincing margin of 19 votes --  275 to 256. Dr Singh -- "King Cong", as he is being jubilantly described by Congress activists -- finally has the mandate to pursue not just the Indo-US civil nuclear agreement but the economic reforms that the Left Parties had vetoed thus far. "Parliament has spoken in an unambiguous manner," the Prime Minister told journalists, who mobbed him, as he emerged beaming from the Lok Sabha,  "This augurs well for the country's development and for India's efforts to take its rightful place in the comity of nations."

Minutes before, he had been seen in the house, hugging Congress MP Rahul Gandhi, and receiving the congratulations of colleagues, allies and a solitary CPI (M) MP Varkala Radhakrishnan (81), who apparently had not forgotten the traditional parliamentary courtesies.

Before that, of course came the drama caused by the electronic voting mechanism But as a recount of the electronic vote began, in the Telugu Desam Party's parliamentary office, UNPA leader Chandrababu Naidu remained closeted with CPI (M) politburo member Sitaram Yechury, watching the proceedings on a TV screen. When the results came in, the two men -- who expressed their determination to go through with the July 23 breakfast meeting at the home of their new friend, UP chief minister Mayawati -- looked uncertain and shaky.

Not only were the two on the losing side of the vote that had just taken place, Naidu had  also just lost two MPs on the floor, Deputy Leader M Jagannath and D K Audikesavulu, both of whom voted for the UPA. But while Jagannath succeeded in doing so, Audikesavulu had his ballot paper ( since his vote failed to register on the electronic machine ) snatched by party leader Yerran Naidu and his vote changed in an unseemly scuffle on the floor of the house! If his vote had gone through, the government would have won by 276 – the figure that had been predicted by  Pranab Mukherjee on July 21!

In sharp contrast to the UPA which remained intact at the end of the vote, the BJP and the NDA stood in tatters -- members of the BJP, the JD-U, Shiv Sena, Shiromani Akali Dal and the BJD had either voted for the UPA or abstained from the vote. For a grouping looking to form the next government, it was clearly not a propitious beginning. Of the other opposition parties, the Left and the BSP appeared to be intact, but the TDP had taken a hit.  The Samajwadi Party, which had looked as though it was on the verge of collapse, was able to stem the tide at 34 – it lost five of its members. 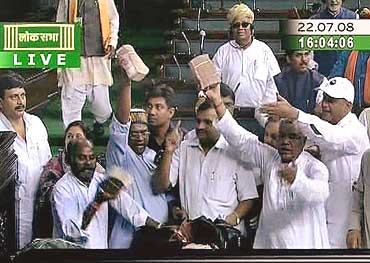 Earlier, the atmosphere had been electric all day, with the opposition, led by the BJP, trying its hardest to stall the proceedings of the house, leading to several adjournments. But from mid-afternoon, there were whispers about some dramatic revelations -- and then it happened. Three BJP MPs Ashok Argal and Faggan Kulaste  from Madhya Pradesh and  Mahavir Bhagora from Rajasthan marched into the Lok Sabha, and emptied two black leather bags filled with bundles of notes, claiming that the three crores that lay on their desks was the first tranche they had received from the Samajwadi Party -- the Congress' new ally -- to vote for the UPA.

As pandemonium broke out in the house, leading to yet another adjournment, outside in the corridors, there was panic in Congress circles. Grim-faced union ministers, chief ministers, party managers and spokespersons rushed around trying to figure out how much truth there was in the allegations, whether there was indeed a CD of the alleged sting operation, whether -- as was being alleged -- the SP's man for all seasons, Amar Singh, and the Congress' Ahmed Patel, who is Congress President Sonia Gandhi's Political Secretary had been caught on tape.

Top cabinet ministers, including those belonging to the allied parties, rushed to the PM's room for a stocktaking, even as the usually reclusive Patel came on TV denying the charges, adding that they if the allegations against him were proved right, he would retire from public life.

In sharp contrast, triumphant BJP leaders including former party president Rajnath Singh, Ravi Shankar Prasad and Prakash Jawdekar -- and their non-political hangers on -- were spotted gleefully telling journalists the "details" of the CD which, they claimed, would be aired on a well-known TV news channel soon.

An ecstatic Satyapal Jain, a BJP MP, asked a journalist, "You wanted to know why we were so quiet. Now you know." Simultaneously, the BJP  demanded that Speaker Somnath Chatterjee decide on the next course of action, while they began the cry for the resignation of the Prime Minister. CPI(M) MPs, meanwhile, tried to distance themselves from the whole business -- since they belonged to neither the " giver" or " receiver" category, even though it later emerged that some of them may have been aware of the operation.

Then as everyone waited to see the CD on air, the TV channel head was spotted in the corridors. As everyone pounced on him to get details of the CD, it transpired that neither Amar Singh nor Ahmed Patel had been caught on tape, that the channel's "investigations" were incomplete (the channel head told journalists that if he had a complete story, it would be on air), that the channel had been caught unawares by the BJP's revelations in the house, and that the Speaker's office has asked him to hand over whatever footage he already had. But an unfazed BJP, meanwhile, began to claim that the government had pressured the channel not to show the CD.

In short, it looked as though the entire confidence debate had been derailed, with allegations of money having changed hands threatening to overshadow and undermine the confidence motion, and the government's efforts to win itself a mandate to rule  till the end of its five year term. The house finally convened for the last part of the debate, before the Prime Minister's scheduled reply and the vote. After the Speaker expressed his intention to investigate the charges made earlier by the BJP, he called on the last few speakers.

It was then that a remarkable quartet, all younger than 40  -- none from the Congress -- braved the taunts of the opposition to make a forceful defence of the government. They were the Majlis-E-Ittehadul Muslimmen's Asadudin Owaisi, the People's Democratic Party's Mehbooba Mufti, the National Conference's Omar Abdullah and the LJSP's Ranjeet Ranjan.

If Owaisi expressed his gratitude to the government for all that it had done for minority welfare and Ranjeet Ranjan, a young Sikh woman MP from Bihar, took on the Akali Dal  frontally, Omar outdid himself: Taking on both the BJP and the Left, he said, "As a Muslim, I  feel that the deal would help India to achieve a rightful place in the international fora. The enemy of Muslims is not the deal, but hunger, poverty and unemployment."

Taken together, the four speeches provided a glimpse of the possibility of bipartisan politics, in which politicians could rise above petty party interests, in sync with the speech made by Rahul Gandhi in the morning. In a way, it changed the mood of the house.

And then it was the PM's turn. As he rose to speak, it was clear that the opposition had no intention of letting him speak: within minutes, the PM walked across and handed over his speech to the officials and then began the voting, with four sick BJP MPs, including former Prime Minister Atal Behari Vajpayee and actor Dharmendra, being permitted to cast their votes from the lobby.

The BJP, which had been hoping to stage a walkout, to rob the voting of any legitimacy, looked a little nonplussed, but now had no choice but to go through with the actual voting. The Congress, clearly, faced with the choice of having the Prime Minister being repeatedly interrupted -- especially as his speech was to take on the Leader of the Opposition directly -- and a vote in which they were sure they had the numbers, chose the latter.

And wisely so. Even though union external affairs minister Pranab Mukherjee later lambasted the opposition for " heaping allegations on the PM and then not waiting to hear him reply." Advani, he said, had begun "the great tradition of speak and run."

For the UPA, now, what's next? Well, now, will begin the tough part, as it gears up first for a round of assembly elections in the key states of Madhya Pradesh, Rajasthan, Chattisgarh, Jammu and Kashmir and Delhi, before it faces general elections. It may not have to look out for the Left anymore, but it will have to deal with a far more whimsical ally in the SP, not to mention checking spiraling prices and rising inflation. As for reforms, the UPA will only be able to initiate those that don't require parliamentary approval. Because even though it has won its confidence vote, it is more than clear that the three pronged opposition of the Left parties, the BJP and the UNPA will not permit it to pass any laws.

So while the UPA has certainly won the day, and the Prime Minister has emerged as a leader in his own right, the real victor of the last few days may well be Mayawati. Her emergence on the political centrestage, the manner in which she has been wooed by UNPA  and Left leaders who have described her as a possible Prime Minister, may well change the political dynamics of this country. For the last few days, Dalit MPs cutting across political lines have been talking excitedly in Parliament about the prospect of a  Dalit PM in the very near future. The UNPA and the Left see an opportunity in this, even though their leaders are a bit wary of being upstaged by Mayawati -- but if reports coming in from different states are any indication, she could well be unstoppable. A week is clearly a long time in politics.