The Left has been in the political wilderness for a while. Can the LDF change the script nationally? 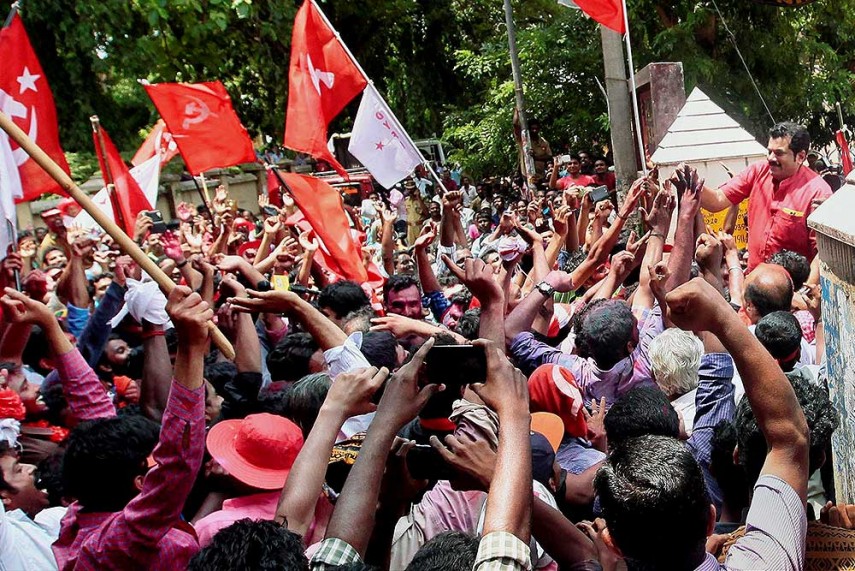 If one were to tweak the lyrics of the popular song from the film Premam to suit the mood of the voters then it was a forceful no: ithu vendra (don't want this) to the Congress-led UDF government. It was a strong no to corruption, to communal forces, price rise, atrocities to women, to the scandals and deplorable moral standards. ithu vendra.

District after district saw the embrace of red. Both Thrissur and Kollam saw the complete rout of the UDF. The CPM, CPI and their allies won 91 seats which would spell comfortable governance without the pulls and pressures of smaller players. And for the first time in Kerala's history BJP bloomed in the state. BJP stalwart O Rajagopal, 86, finally won in Nemom (Thiruvananthapuram district) after losing every single election that he has contested since the 1980s. The sitting MLA V Sivankutty (CPM) gave him a good fight till the last minute.

Even the UDF strongholds crumbled and four of the UDF ministers were defeated and so was the Speaker. And many of the UDF heavyweights who have been nursing their constituencies for decades fell by the wayside. INC was reduced to 22 from 38 in the last assembly. It was their allies Indian Union Muslim League (18) and the numerous Kerala Congress groups combined (5) that saved the UDF from hitting rock bottom.

More than the expected decimation of the Congress it is the lone BJP victory that is being examined by political analysts during media discussions. BJP's Rajagopal won by a margin of 8671 votes in Nemom. By all means that is not a large margin for a person who has been contesting since the 80s. But BJP considers this as a big break in a state that refused to be swayed even by the Modi wave in the Lok Sabha election. Both the Congress and the Left leaders had repeatedly said before the elections that BJP will not be able to bloom in this secular state. Though sitting MLA V Sivankutty gave him a good fight and the UDF candidate V Surendran Pillai was not to be seen anywhere. The Left has been accusing the UDF of not putting up a fight in fact throwing away the seat to the BJP. CPM general secretary Sitaram Yechury at a press conference called it a match-fixing between the UDF and the BJP. He said that if the voting pattern is examined it is quite clear that the UDF did this.

Pillai's candidacy too has come under a cloud. Pillai is believed to have joined the UDF because he was denied a seat by the LDF at the last minute. Pillai (Janata Dal -united) could muster only13,860 votes. It is politically said that Congress put up Pillai to let Rajagopal win. Pillai has a history of leaving and joining parties. He left Kerala Congress (J) and joined the rebel group and then left that to form the Kerala Congress (Scaria Thomas), and then joined the Janata Dal United to get the seat in Nemom.

CPM state secretary Kodiyeri Balakrishnan while talking to the reporters said that in 50 per cent of the polling booths there were no UDF agents and post lunch there were none in any of the booths. Even prior to his loss in Nemom, there were reports that UDF was going slow in Nemom and was not seen anywhere on the final campaign day when the two parties CPM and BJP exhibited their might.

Prime Minister Narendra Modi, BJP president Amit Shah and other cabinet ministers who campaigned in Kerala did not leave much of an impression. Kerala was unimpressed by the newly formed party BDJS by the SNDP (an organisation of the powerful Ezhava caste) general secretary Vellappally Natesan. Natesan who is perhaps the only politician to be surrounded by black cats (a perk given by the centre) for aligning with the BJP failed miserably to win any seat. And in the few seats that the NDA came second it was the BJP members who were able to secure that position.

Natesan who had declared that BJP's lotus would bloom in the BDJS pot (symbol) admitted that they had failed miserably. He boasted that the sun would change its course with the win of BJP-BDJS. Natesan was able to bring PM Modi to the rice bowl of Kuttanand ( a place usually not on the GPS of the national leaders) to campaign for the BDJS candidate Subhash Vasu who was rumoured to give the sitting MLA Thomas Chandy a run for his deposit. Left was pretty vocal that Natesan and Chandy were in an understanding that the UDF would help Vasu while BDJS would help Congress minister K Babu in Tripunithara (a Chandy man) and K Sudhakaran in Uduma. It turned out to be a strange arrangement that never helped anyone for all three lost miserably while Thomas Chandy romped home.

But political analyst Advocate Jayashankar said during a media discussion that BJP has been able to make an impression on the people especially among the other backward communities.

CPM state chief Balakrishnan only too aware how the nervous minorities, traditional UDF voters, rejected the UDF, and consolidated their votes and backed the Left, said that the rise of the communal forces will not be allowed to flourish in Kerala. He promised that the few constituencies where NDA has come in second would be examined to see that secular atmosphere is created. “The political agenda of the RSS has been defeated in Kerala. BDJS was constructed by the BJP and there is no place for the BDJS in Kerala.” The Left has been stressing that they will fulfil all the promises in the manifesto.

Writer and activist K N Karassery hopes that the Left will do a course correction and get their act together. “The politicians and bureaucracy are one class and it is the people who are in the opposition. The corporates have robbed us of our rivers, mountains, forests. I have faith in Sitaram Yechury, V S Achuthanandan and the Tripura chief minister Manik Sarkar. Sarkar who is doing a commendable job in Tripura has a cult following. If the Left does not work for the poor then they are no different from the other parties. Their policies are no different from the UDF. They are also running after corporates and they say they are going to bring a policy of development but all this development will destroy the environment. It is time for the Left to act. The poor still have some faith in them.”

Will the Left which has been in the political wilderness for a while do something to change things and even emerge stronger at the national level? They have five years to prove that.