Kerala Folklore Museum: 3 Floors, 10 Centuries And 5,000 Objects of Common Use

Kochi’s Folklore Museum is the only one of its kind in the southern state. A peek at what makes it special on the occasion of its tenth anniversary: 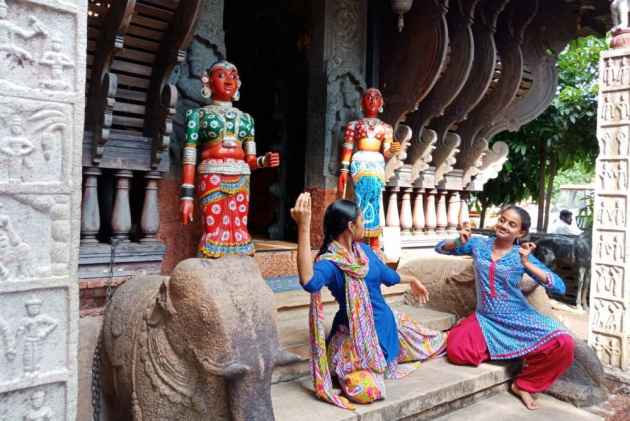 Around this time a decade ago, a marshy plot by a creek in coastal Kochi sensed the prospect of a heritage complex taking shape in the near future. That was in the mid-summer ahead of the 2008 monsoon when the construction of a Kerala Folklore Museum for over seven years then was gaining nearing completion so as to be open to public within a span of six months—all that by reassembling old structures from across the tropical region.

Thus, on the New Year Day of 2009, the compact three-storeyed building was inaugurated, gifting God’s Own Country with what its private entrepreneurs call “is the only architectural museum in Kerala with the essence of the life and culture of the common man over the past 1,000 years”. Today, midway into its tenth year, the vintage-looking wood-rich repository has become a landmark for the tourists and natives of the southern Indian state. 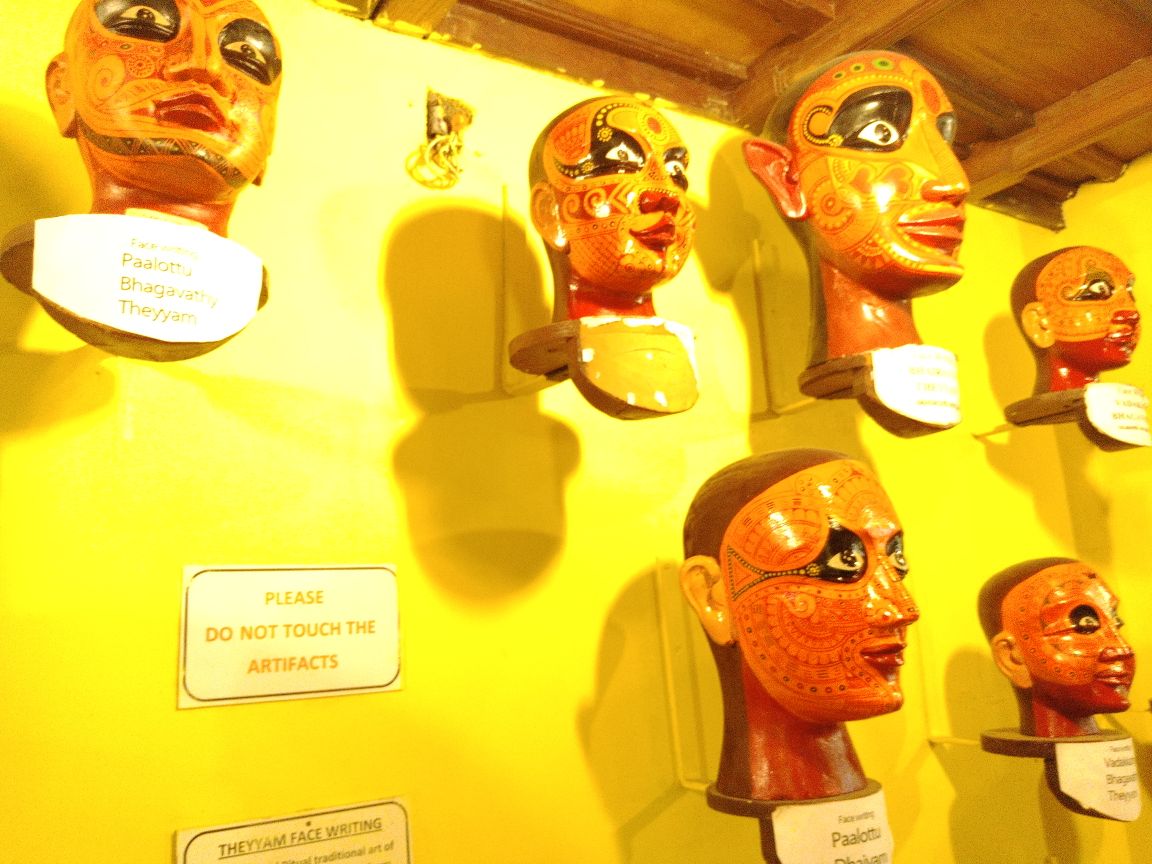 Broadly, the gable-roof museum displays artefacts from across the country’s peninsula, but—as the name suggests—the focus is on the slender state by the Arabian Sea, which has been instrumental in making the host city so cosmopolitan for a couple of millennia. If pre-Independence India had Kerala split into three provinces, this museum has its three floors focusing on historical objects from each of them: Malabar (ground), Kochi (first) and Travancore (second). 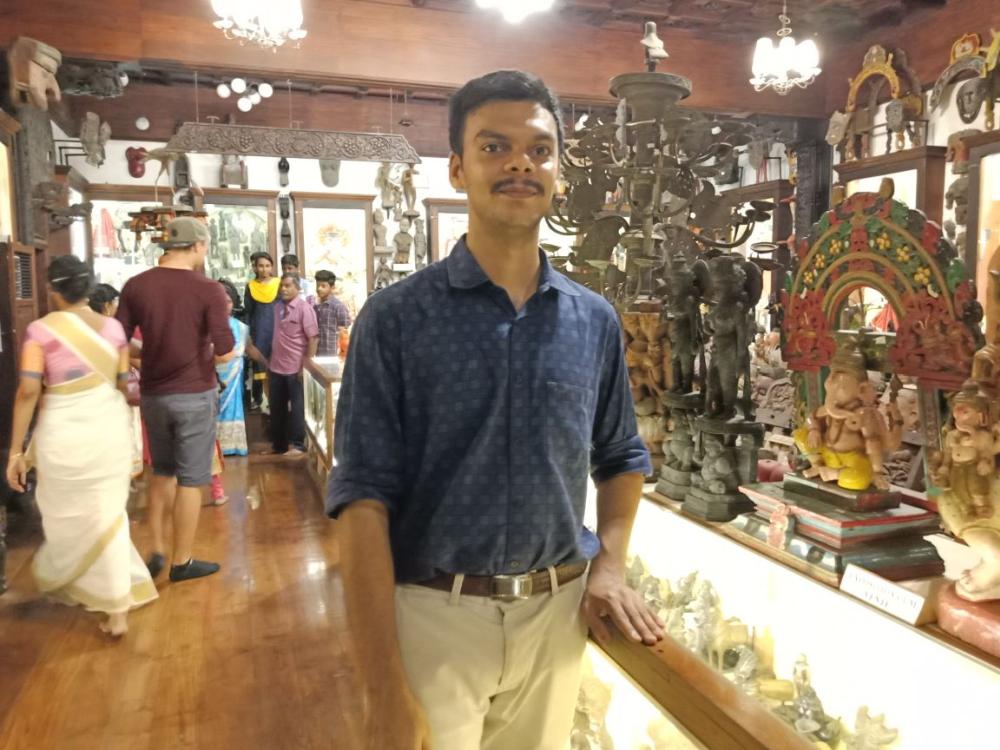 The top-most ceiling, perhaps most interestingly of all, houses a traditional theatre hall that is called Koothambalam in contemporay Malayalam language. Typically a temple-allied structure, it occasionally hosts for the museum visitors some of Kerala’s folk and classical performing arts. “Even so, we are basically an architectural gallery,” says the museum’s owner George J. Thaliath, an art dealer hailing from Varapuzha, 25 km northwest of Kochi and not far from what is of late historically referred to as Muziris. The museum Koothambalam crowning the museum has a massive 18th-century edifice made of wood weighing almost 64 tonnes without any support down its middle. As the description suggests, the whole weight is equitably disbursed through the lintels surrounding the entire hall. “Overall, the venture is a result of no less than three decades,” he informs about the museum that involved a teamwork of 62 skilled craftsmen and eventually featuring 5,000 artefacts, primarily from the area that is now Kerala and largely belong to over the past 1,000 years.

Middle-aged George, with a passion for art history since the 1980s, has his wife Annie alongside children Jacob and Elsa running the ticketed enterprise that is open on all days of the year “except Good Friday”. As if keen to hold the next-generation mantle of the museum, young and tall Jacob Thaliyath speaks about the vitality of the Koothambalam conceived by his father—on the floor he stands. “It has 253 mural paintings,” he shows the evening-time visitors. The themes are from the grand Hindu epics, the Ramayana and the Mahabharata. “The overall objective is to provide art education to the young generation, who don’t know much about their own heritage. We need to preserve our culture—and this is one way of doing it,” he speaks with a dash of practised ease. 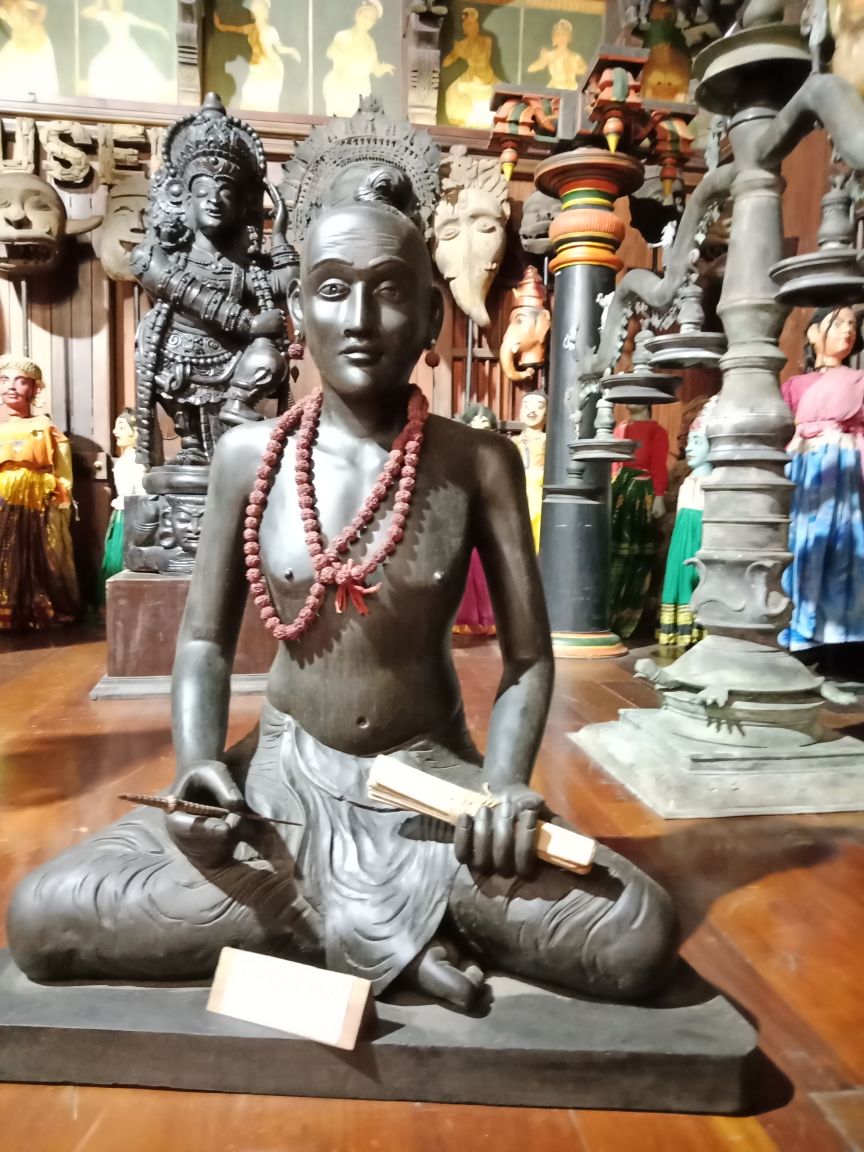 Virtually keeping in the spirit of Kochi’s hybrid culture, the Koothambalam, on a broader view, can also remind the visitor of the interiors of a modest synagogue (like the 550-year-old one in Kochi’s suburban Mattancherry), courtesy primarily the chandeliers adding to the charm of the ceiling. Not to be ignored, the room has a grand glass-case display of non-Hindu religious texts of vintage variety. Dotted with a dozen bygone-era statues placed on the foot-high wooden stage, the Koothambalam tastefully bustles with varied masks and large curios besides sketched-and-coloured images of Kerala’s arts such as Koodiyattam, Kathakali, Krishnanattam, Nangiarkoothu, Mohiniyattam, Velakali, Kalarippayattu, Kaikottikkali and even mural-style visuals of houseboats and bullock-carts. 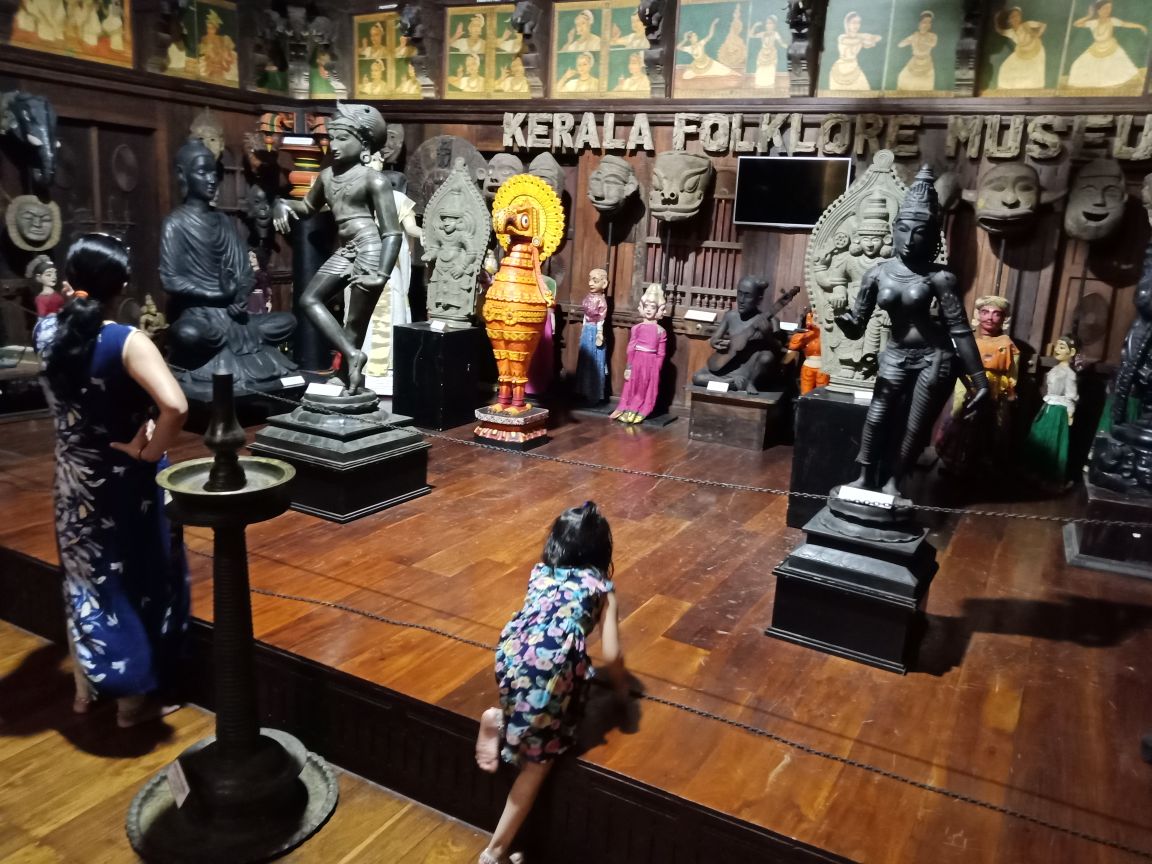 The ambience is no less rich down the first and ground floors, where the artefacts are a bit cluttered, though. “We have had only a bit of increase in their numbers over the years,” says Jacob with a smile, about the museum which had one of its highlights on November 11, 2013, when Prince Charles of Wales, the heir-apparent to the British throne, visited the gallery with his wife Camilla Parker Bowles on the occasion of the release of a coffee-table book on its display objects. Adds George, “We like to call it a ‘Temple of Art’.”

The ‘ambalam’ word, which comes after Kooth, anyway means shrine—and makes the museum special. Else, downstairs the rest of the exhibits are more or less the expected ones throwing light on objects of daily use: vessels, lamps, jewellery, ornament boxes and furniture, besides traditional costumes and paraphernalia of Kerala arts. Plus, yes, direct extracts from feudal-era temples and mansions alongside idols and statues, flaunting the region’s architectural and sculptural splendour. 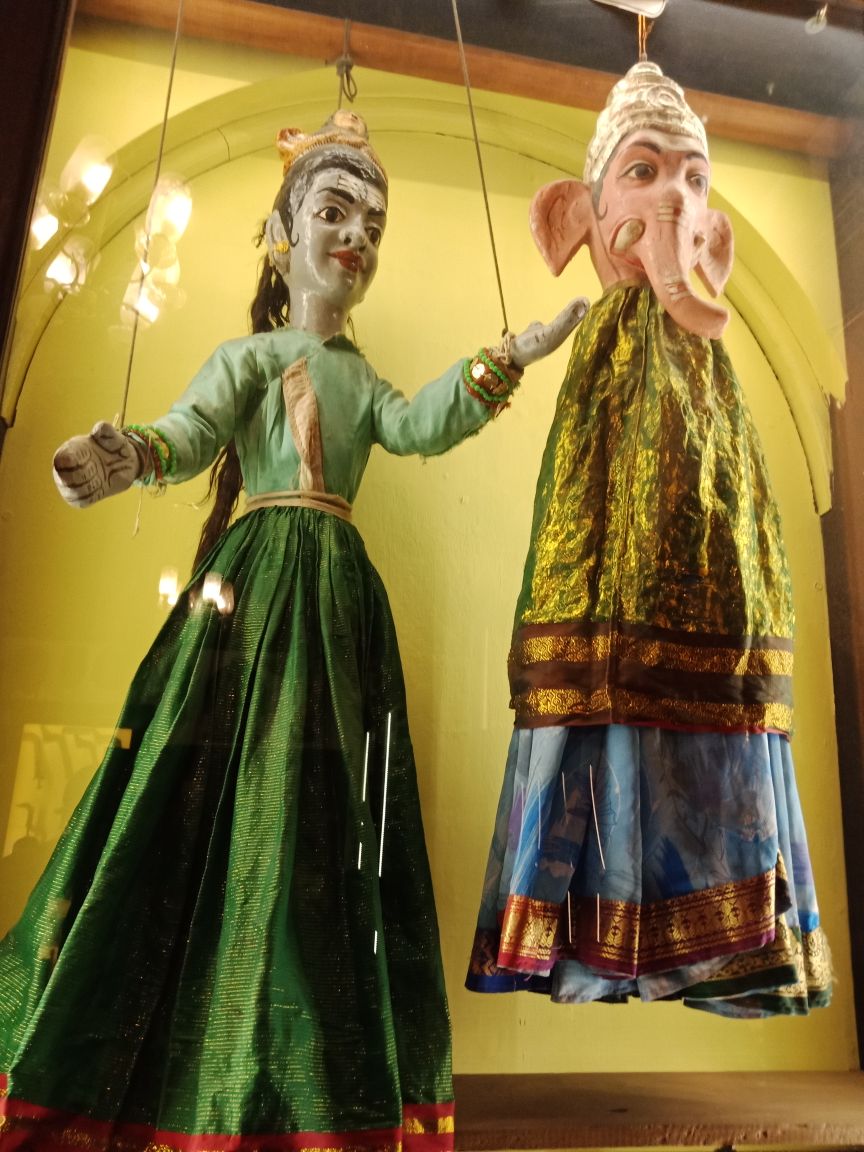 “Our belief is that no place of worship in this world sustains itself without believers, and we hope to look to the future for continuing with spreading the knowledge of art with unstinting effort,” says George, 59. The complex also has a couple of curios shops that also sells articles of heritage value (like, for one, Chendamangalam textiles).

Outside, a couple of visitors freeze into a Bharatanatyam posture at the front steps leading to the Kerala-style threshold of the museum. It is sundown time, and a sprawling Kochi wakes up to another spell of night life lit up by a flurry of bright electric bulbs.