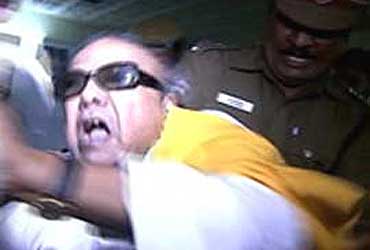 Amidst high drama, DMK chief and former chief M Karunanidhi was was woken up by police at 1.45 am at his residence, roughed up and arrested in connection with the Rs 12 crore 'flyover scam' and has been remanded to judicial custody till July 10.

When Karunanidhi complained of giddiness, the Judge directed that he may be examined by a panel of doctors at the Government General Hospital in presence of DMK chief's personal physician, Dr Gopal.

Opposition councilors of Chennai corporation, where DMK is in power, had recently submitted a memorandum to the governor alleging irregularities in awarding contracts for the construction of 10 flyovers in the city, on the basis of which Karunanidhi was arrested.

The judge has posted the hearing on Karunanidhi's bail petition to July 3.

The First Information Report (FIR), based on a complaint lodged by Corporation Commissioner J C T Acharyalu, was filed only yesterday, according to police sources.

Former Chief Secretary K M Nambiar and two others, who were also arrested in connection with the scam, were also remanded by the Judge to judicial custody till July 10.

Union Minister and nephew of Karunanidhi, Murasoli Maran, who was injured in the scuffle was admitted to Apollo hospital here. Another Union Minister T R Baalu also sustained minor injuries.

Karunanidhi and others have been charged under various sections of Prevention of Corruption Act.

According to the police, Karunanidhi's son and city Mayor, M K Stalin, who is the prime accused in the case, was earlier said to be absconding, has also been arrested now.

Karunanidhi was physically lifted by the police and he was screaming that police was attempting to kill him. He was dragged down the stairs of his house. As he protested against the arrest, one of the police officers pushed him down, DMK sources alleged.

The clippings of Karunandihi's arrest, telecast by SUN TV in its special news bulletin this morning, also showed the police manhandling Murasoli Maran, Union Minister for Commerce and Industry and nephew of Karunanidhi, who came to the rescue of Karunanidhi.

Karunanidhi was later taken to a police station for interrogation in connection with the alleged 'scam' on the construction of ten flyovers in Chennai city.

The DMK leader’s son and the mayor of Chennai, M K Stalin, has been arrested. The state's former chief secretary K M Nambiar and six other people have also been arrested.

Karunanidhi was being taken to the residence of a metropolitan Magistrate for remand, police sources said.

Maran, along with the family members of Karunanidhi, was later taken to the police station where Karunanidhi was lodged.

Police, however, could not say the reasons for taking him into custody immediately, when the reports first came in.

The sources had initially had refused to disclose where Karunanidhi and others have been detained.

No Summons Or Charges

'There was no summons and charges against me. I was  asleep when police woke me up and informed that I was under arrest', Karunanidhi earlier said.

"The police came when I was asleep. We asked them if they had any warrant but they said that in a criminal case no warrant was needed. They behaved very badly with me. They pulled my towel and my shirt and I almost fell down the stairs," said Mr Karunanidhi.

The DMK leader’s son and the mayor of Chennai, M K Stalin, has been arrested. The state's former chief secretary K M Nambiar and six other people have also been arrested.

The Police also took Union Commerce and Industry Minister Murasoli Maran to the Vepary Police station, where Karunanidhi was kept.

When Maran refused to leave his house for the station, police physically lifted him and put him in a car to the police station, DMK sources alleged. It was not immediately known whether Maran was also taken
into custody.

The family members of the 77-year-old Karunanidhi, including his wife Dayalu and daughter Selvi, were also taken to the police station, DMK sources said.

When Karunanidhi was taken for interrogation to Rajaji Hall where the CB-CID office is located, nearly 20
mediapersons, who went there to cover the arrest, were taken into custody. They were kept at the city's Vepary police  station for some time before being released.

Media persons were also kept away when the former Chief Minister was taken to the state Guest House from Rajaji hall for questioning. Media were also denied entry into the residence complex of Principal Sessions Judge.