Does Kalam's Islamic liberalism, or following Hindu traditions make him less of a Muslim? Or is it Sangh Parivar's recognition of Kalam's work that has become a cause for concern for many Muslims leading them to question Kalam's religious roots and i 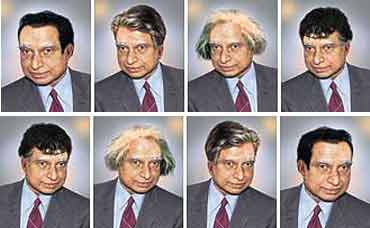 In the wake of Dr. Rafiq Zakaria’s article "What is Muslim about Kalam?" in The Asian Age, I received several requests to clarify Kalam’s Islam. Many asked if Kalam’s Islamic liberalism, or following Hindu traditions, makes him less of a Muslim? Or is it Sangh Parivar’s recognition of Kalam’s work for the country and reward that has become a cause for concern for many Muslims leading them to question Kalam’s religious roots and interest?

Most of the world knows that Hinduism is a great philosophy and Hindus are some of the best people on earth. It is Hinduism that has given us leaders like Swami Vivekanand and Mahatma Gandhi. It is only Hindu philosophy that believes in the ultimate unity of all religions at the highest level of our intellect. And it is only Hindu faith that truly understands that the differences amongst different religions exist only at the lower levels of our existence-- the lower the level, the larger the difference.

In that sense, it is a religion that has unification at its core. Historically, Hindus have asked themselves the intriguing question at the highest level of human intellect: Has God made man in His image, or has man made God in his image? The answer lies in the question which goes to show the power of our culture, the Indian culture, that we have been blessed with.

There has also been a general notion amongst many of us, especially from India at lower levels, that Islam is against nationalism; that most Muslims are anti-national; that Islam preaches intolerance of other faiths and violence for the infidels. Again, judging from the behavior of a few Muslims and a large Muslim leadership, that notion would not seem without a basis. However, a true Hindu, just as a true Muslim, knows there is inherent danger in generalizing that to all Muslims.

The very existence of APJ Abdul Kalam is just one example. I know many, many more, lesser known Muslims who have understood Islam at the highest level, a level where the traditions of Islam and the concepts of Heaven and Hell assume an entirely different meaning and significance. These are the Muslims who have full respect for other faiths, who have unification at the core and humanity at the very top.

Abdul Kalam is one of those intellectuals who have crossed the boundary of religions and have entered the zone where one recognizes and reveres the laws and principles of the nature by freeing oneself from the bonds of traditions.

I am sure that his early association with Hinduism and the impact of Hindu Philosophy must have been a help. It is hardly surprising that he reads the Bhagvad Gita more than he may read other scriptures which many may feel he should, based on his name. I have nothing but very high regards for such men.

Ideally, the purpose of education should be to elevate an individual to the merger zone of all religions where he/she can see the commonality amongst them and recognize the higher purpose of life. But unfortunately the success rate is very small. Many people, even highly educated ones, remain tied to the base of their religions, where guided by their narrow interests and wider differences, they continue to divide. This happens amongst the followers of all religions including Hinduism. Criticism of Kalam on that account from several Muslim blocks is very much understandable.

However, Dr. Rafiq Zakaria is an eminent writer and I very much admire his views. I would have been forced to change my opinion about him had he said, in What's Muslim about Kalam?, that following Hindu Dharma is wrong. He did not say that. What he did say is that there is nothing wrong for a Muslim to follow other traditions and beliefs, especially Hinduism. I think his article has more to do with presenting the facts than passing judgments. In my opinion, Dr. Zakaria is one of those Muslims who have understood Islam at the highest levels and put that understanding into practice.

The dignity, the respect and the reverence that Kalam earns from Hindus and Muslims alike is essentially because of his success. As we all know, success has many fathers. It's a little surprise that Muslims are proud of Kalam, even if they know that his apparent association with them is just based on his name and nothing else.

Indian Intellectuals, both Hindus and Muslims, like him because he has what it takes to be a proud nationalist, an advocate of Indian values and culture, and a true son of the motherland. Radical Hindus from Hindutva Brigade like him because beside his patriotism and success, they also see in him the signs of transition or deviation from Islam to, what they believe is, Hinduism. Everyone sees something likable in Kalam.

The timing of his nomination by the BJP, however, does cast some shadow on the nobleness of the gesture raising suspicions in many minds that there is obviously a lesser noble motive behind making Kalam the President of India. Hindutva Brigade vociferously supporting that nomination only furthers those suspicions. The elements of this Brigade, after all, are responsible for bringing down the Hindu Philosophy from its moral high ground of the tranquility and unity of all religions to the lows where religious differences are strong, obvious and confrontationary.

All this put in the background of Gujarat, and BJP coming up with Kalam's name as a second thought, also helps little to cast away those apprehensions that Kalam's nomination is more clever politics than a due recognition, or reward for his services to his country and the people. Just as Hindu concerns about an average Muslim mind-set is not without a basis, under the circumstances Muslim concerns about using Kalam's Islam as a license for putting a curtain on Gujarat, if not carrying Gujarat to other states in India, will not appear without a basis.