Just What The Skipper Ordered

Stephen Fleming made history by becoming the most capped ODI captain and the Kiwis gave the perfect gift to their leader by stunning Pakistan with a 51-run victory to become the first team to secure a semi-final berth. 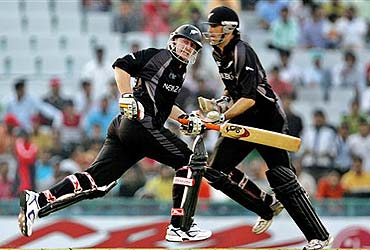 New Zealand turned the tables on fancied Pakistan with a stunning 51-run victory to become the first team to secure a berth in the semi-finals of the Champions Trophy today.

The New Zealanders gave the perfect gift to their captain Stephen Fleming, who made history by becoming the most capped ODI captain, by first posting a competitive 274 for seven and then dismissing Pakistan for 223 with 3.3 overs to spare in a floodlit Group B contest at Mohali.

The Kiwis innings was largely built around Fleming's 105-ball 80 and Scott Styris' knock of 86 as the duo stitched a vital 108-run fourth wicket partnership to bail the team out of early trouble.

Some lusty hitting in the slog overs by Jacob Oram (31) and Brendon McCullam (27) provided late sparks to the innings with the New Zealanders plundering 99 runs in the last ten overs which proved to be a big factor in the end.

The result means that the last league match between Pakistan and South Africa, both of whom have two points from as many matches, will determine the second semi-finalist from Group B.

New Zealand have now completed their group engagements with four points. Since the winner of the Pakistan-South Africa match will also end with four points, the net run rate will decide the champion team from Group B. Sri Lanka, the fourth team in the group, are now out of the championship.

Mohamamad Yousuf (71), Shoaib Malik (52) and Mohammad Hafeez (43) were the notable scorers for Pakistan who found the going tough against a spirited bowling display by the Kiwis.

With a good total to back them, the New Zealand fast bowlers came to the party at the PCA Stadium. Tearaway Shane Bond proved his effectiveness on a helpful track with 3 for 45 for while Jacob Oram and Kyle Mills also chipped in with tight spells.

With the bowlers excelling under lights without any perceivable trouble due to dew, the use of chemical spray on the ground appeared to be justified.

Credit should also go to the curators for preparing a beauty of a wicket which had something for both the bowlers and the batsmen and played true in both the innings.

Pakistan, listless both in their bowling and batting, lost their first wicket when opener Imran Farhat (6) top-edged a short one from Bond to be caught by Mills at third man.

Even before Pakistan could recover from the blow, New Zealand got the prized wicket of skipper Younis KHan (2) who slashed a short and wide ball from Mills to backward point where Lou Vincent gleefully accepted the catch.

Their confidence boosted by the two crucial breakthroughs, New Zealand bowlers struck for a third time, this time Jacob Oram dismissing a dangerous looking Mohammad Hafeez for a 46-ball 43 (8x4) to reduce Pakistan to a precarious 65 for 3.

Much was expected of the explosive Shahid Afridi (4) as he walked in with a confident swagger to the field. But the mercurial all-rounder showed little comprehension of the situation and walked off with his face buried in shame after his half-hearted hook shot off Oram was caught by Bond.

It was then left to Mohammad Yousuf and Shoaib Malik -- saviours in Pakistan's first match against Sri Lanka -- to undo the damage and the duo did their best in stringing together a partnership of 94 runs and stem the rot.

But just when Yousuf was looking all set for a three-figure score, he was dismissed by Bond, tactically introduced for his second spell, for 71 that came off 92 balls and contained nine fours.

With the asking run rate mounting with every ball and five top order batsmen back into the pavilion, it became increasingly difficult for the Pakistani players to counter the disciplined bowling of the New Zealanders.

There was no other way out for them but to take the aerial route and it resulted in Abdur Razzaq (6) gifting Bond his third wicket of the match.

The rest of the batsmen also perished one after the other in an attempt to go for big shots.

Earlier, Fleming and Styris lifted their team from a precarious 60 for 3 with an 108-run partnership for the fourth wicket.

Fleming hit eight fours and a six in his 105-ball knock while Styris slammed 10 fours off 113 balls as Pakistan struggled to contain the rival batsmen.

Oram also capitalised on some unimaginative bowling to hit a cameo 31 off 26 balls with four fours and a six. New Zealand milked a whopping 99 runs from the last ten overs.

The Kiwis were off to a disastrous start as Umar Gul struck with the new ball, clean bowling a struggling Vincent (3) through the gates in spectacular fashion to give Pakistan an early breakthrough.

Nathan Astle, coming into the match on the back of a fluent 42 against Sri Lanka, again looked in fine touch, hitting three fours in his 17-ball 15 before gifting his wicket to a rash shot. After swatting Rana Naved-ul Hasan  to mid-wicket fence, he attempted a wild heave only to edge it to Younis at first slip.

Fleming, leading the side for the 194th time surpassing Arjuna Ranatunga's mark of 193, tried to ease off the pressure of losing two quick wickets by hitting two consecutive fours off Gul in the very next over.

The left-hander also hit a six off Rana Naved, the ball flying to the top tier of the stands where it unfortunately hit a spectator who was promptly taken away for medical attention.

But New Zealand were struck a fresh blow when Peter Fulton was adjudged leg before off first change bowler Rao Iftikhar Anjum for 7, reducing the Kiwis to a shaky 60 for 3.

Fleming then joined hands with Styris to stage a rescue act and reached his 45th ODI fifty and fifth against Pakistan in the process.