'Joy Is The End Of Life'

Mallory and Irvine: the men who first took on the Everest, may have died in the process but they live on in history. 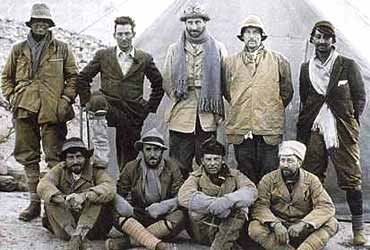 A new world record was set recently when a 70-year-old headmaster from Japan safely scaled the Mount Everest. In the fiftieth year of its conquest, teams from various countries (including India) are making it to the summit, some separated by minutes. Today it seems as if the 'roof of the world' has turned into a favourite picnic spot for the adrenalin driven.

But in 1924, it was one of the few virgin territories left on earth which the dauntless spirit of human adventure yearned to conquer. The Poles were conquered, the continents were thoroughly explored,  just the 60 million year old, 8850 mts high peak stood in its isolated supremacy thumbing its nose at mankind.

At that time, nobody even dreamed about global positioning systems, up-to-the-minute weather forecasts, walkie-talkies with lithium batteries, titanium crampons, Gore Tex fleece or lifesaving altitude drugs. Equally, importantly, there were no experienced climbers to learn from about the dangers ahead.

In the annals of mountaineering, if there are two men whose sheer grit and motivation has inspired generations of climbers,  they would have to be George Leigh Mallory and his partner Andrew Irvine. Like Batman and Robin, the two Britishers armed only with their training, experience and climbing equipment took on the role of superheroes to 'bring down' the towering devil.

The fact that they both lost their lives in the process makes their exploit just that much more poignant.

Mallory, a Cambridge graduate and son of a clergyman, when asked why he wanted to climb the Everest famously said: "Because it is there". His motivation, however, become clear from what he once said in an interview:

"The first question which you will ask and which I must try to answer is this, 'What is the use of climbing Mount Everest ?' and my answer must at once be, 'It is no use'. There is not the slightest prospect of any gain whatsoever. Oh, we may learn a little about the behavior of the human body at high altitudes, and possibly medical men may turn our observation to some account for the purposes of aviation. But otherwise nothing will come of it. We shall not bring back a single bit of gold or silver, not a gem, nor any coal or iron. We shall not find a single foot of earth that can be planted with crops to raise food. It's no use.

"So, if you cannot understand that there is something in man which responds to the challenge of this mountain and goes out to meet it, that the struggle is the struggle of life itself upward and forever upward, then you won't see why we go. What we get from this adventure is just sheer joy. And joy is, after all, the end of life. We do not live to eat and make money. We eat and make money to be able to enjoy life. That is what life means and what life is for."

The idea of an Everest expedition was the brain child of the Royal Geographical Society (RGS) in UK. The race to North Pole was already won by the American, Robert Peary, in 1909 and Mount Everest seemed the last resort for securing British pride. In 1919, The RGS and  the British Alpine Club decided to organize a 'reconnaissance' expedition to the mountain. By January 1921, the RGS secured permission from the Dalai Lama to find the best route to the Everest from the Tibetan side. By then, Mallory was a war veteran and with his vast experience of the Alps the most prolific climber in UK. Percy Farrar, president of the Alpine Club, wrote to Mallory at the end of January 1921: 'It looks as though Everest would really be tried this summer. Party would leave early April and get back in October. Any aspirations?'

Once on the reconnaissance mission,  Mallory  had other ideas. Accompanied by some other climbers from the team, Mallory attempted to climb Mt. Everest. After days of climbing they reached a height of 23,000 ft. in an area called the North Col, but high winds forced them to turn back .

With the summit route map in hand, Mallory led a second mission in 1922. The first attempt took them to 27,000 feet , the second attempt, made a few days later, reached 27,300 feet. The third attempt ended in disaster. Seven sherpas were killed by an avalanche in the North Col. Yet again, they had to turn back.

Mallory was nearly 38 in 1924. He knew this would be his last attempt on the summit. John Noel, the photographer on the expedition, later recalled that Mallory was 'mentally ill' about Everest. Andrew Irvine was a surprise addition to the 1924 Everest climbing team; at 22, he was easily the youngest member, and also the least experienced climber. Recommended by team member Noel Odell for his physical and mental strength and practical engineering abilities, Irvine worked diligently on the oxygen apparatus throughout the expedition. En route to Everest he wrote: 'Found all but one of the oxygen frames had been more or less damaged in transit, so spent afternoon and evening repairing them with copper rivet and wire. Also made tin lamp shades to replace the cardboard ones which continually caught fire.'

But the weather gods, it seems, colluded with the Everest to stop Mallory. By early June 1924 with a run of bad weather and the monsoon approaching the expedition prepared to retreat. But Mallory wanted to have one final crack at the summit with the relatively inexperienced Irvine. Though Mallory and Irvine were great friends by then, team leader Edward Norton had his doubts about Irvine's abilities. He told a team member, 'There is no doubt Mallory knows he is leading a forlorn hope.'

Mallory and Irvine left the North Col on June 6. Except for one brief sighting by team member Noel Odell on the morning of June 8, they were never seen again. What happened to the two climbers that day, no one knows. Some theories suggest that Mallory left Irvine behind and made a dash for the summit with all the remaining oxygen; others, that the inexperienced Irvine fell and brought both the climbers down.

The body of George Mallory was found on 1 May 1999 on the north face of the Everest, at an altitude of 8170 metres. A detailed examination of the position and condition of the body now suggests that both climbers were alive at the time of the accident, and that it was Mallory who fell to his death. Irvine might even have tried to hold his friend and mentor, only to have the rope snap under the strain.

Did Mallory reach the summit? The answer is still a mystery. His camera is yet to be found and its contents may hold some clues. His possibly unrequited love was duly remembered by Edmund Hillary when he "knocked the bastard off" in 1953. On descent the gracious mountaineer did offer a tip of his hat: "Wouldn't Mallory be pleased if he knew about this."

That Fabulous First Time At The Top