'It Was An Arab Spring For Gender' 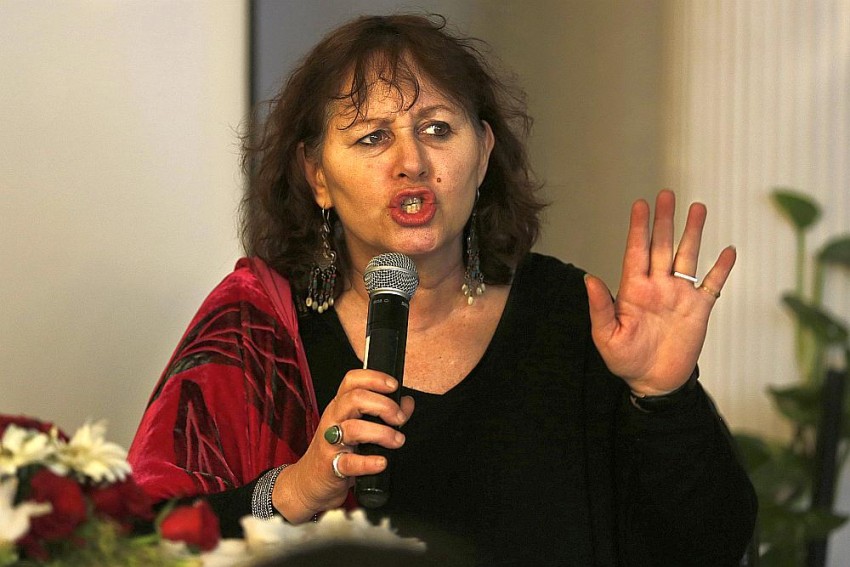 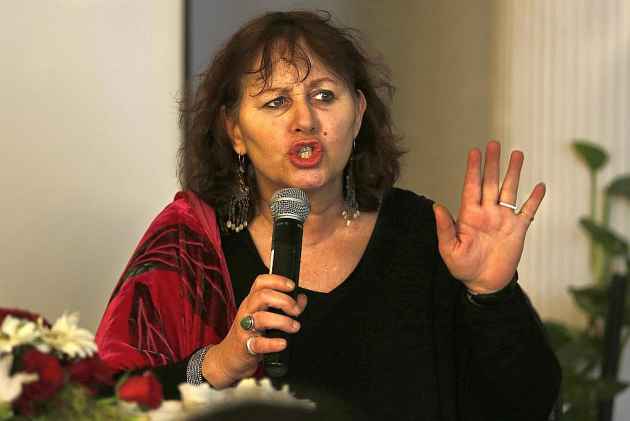 Leslee Udwin's film India's Daughter on the December 2012 gangrape has been backed by many Hollywood personalities, including Meryl Streep, for the 2016 Oscars. The Indian government had the film banned, claiming it a conspiracy to blacken India's global image. The film glorifies India for the protests, Udwin tells Ushinor Majumdar in an interview along with other previously-undisclosed facts following a screening at the 9th Global Investigative Journalism Conference held recently in Norway.

What was the global reaction to the protests after the December 2012 rape in Delhi?

Many countries did not cover the protest. They are as much in awe of the protest as I was when I saw it. They said, "We didn't realise to what degree Indian people were enlightened and came out onto the streets." Actually, it is a hugely positive film about India which is why it's wrong to say it was a conspiracy to shame India.

In the version you have screened, it shows a set of worldwide statistics on violence against women. The BBC version has left it out.

If a company invests before the film is finished, they become an acquirer of the rights. They only have rights in the UK. Because they put up the money for the film, they cut their version of it. Despite my pleading, BBC took off the statistics which were an integral part of the film.

What was the reaction to those statistics on violence against women?

Viewers were shocked to learn that 96% of women in Egypt are subjected to genital mutilation, that 33% of girls between 13 and 17 in the UK have experienced sexual violence. But, there isn't a country that doesn't hold its hands up. Nobody shies away from this — It's 2015. Only Indians want to pretend it doesn't exist in their country.

You mentioned that you are working with the UN on a solution to violence against women. So, what according to you is the solution?

We have been teaching our children numeracy and literacy only and have woefully neglected their wholesome education, to teach them values and to practice empathy. What do we expect from a young man whom we teach that a woman is of no value. Society is responsible for the way rapists think and therefore their actions. We encourage them to rape.

Recently, India has cracked down on many organisations. What does it say about the government?

When did you think of making the film India's Daughter?

On Dec 23, 2012 — the day the water cannons came out and the batons were wielded over the protestors. I had spent the few days before that watching them, falling in love with them. There has been no similar mass mobilisation in India since Independence and this wasn't a mobilisation by political leaders or interested groups. I can remember amazing protests in my life. There was the recent one in Paris in response to Charlie Hebdo. There was the British protest to dissuade Tony Blair from going into Iraq. But, these other protests lasted only for a day. In India, they were out there fighting for my rights for over a month. It was an Arab Spring for gender. Protests are beautiful and are not to be feared or cracked down upon. A crackdown is purely testosterone-driven, immature and reactionary.

What was your initial plan?

This had to be a film about why men rape converging with the protests and it also had to be a tribute to her. I wanted to say that a young life has been snatched away from us, I want to know what was lost — who that young person was; why those six men did this to her; and then, I wanted to thank the protestors for being so courageous, upstanding and protecting my rights. There is still so little known about her. The film does look into it but I have lots more detail about what an extraordinary woman she was and the world she fought against crushed her. She used to stop on the street and confront men who would stare at her. I know it because I spoke to one of her closest friends, who later, was ordered not to come on camera by her father and her brother and give a tribute to her closest friend.

What do you make of this patriarchal system in India?

What's unusual in India is that the woman obeys. My father was a patriarch; I am Jewish and was born in Israel which has an identical system. What is different is that I was able to rebel against my father's diktats. I had some degree of freedom, the woman had that freedom and Indian girls are moving towards it. But, it is still a culture where a girl has to obey, be meek and timid and fit into this restrictive patriarchal view of what to wear, say, where to go, with whom and at what time. And when you hear these rapists saying, "It's her fault, she was out after 9" — they believe this completely. They feel she broke the restrictions that the patriarchal system set upon her. She is a bad girl and deserves to be raped and they believe it with all their hearts and that's why they think they are not wrong. The system is the same the world over and the fathers and the brothers are the same the world over. It is the same reason there is 20% women's representation across the parliaments of the world.

How did you set up the interview in the jail?

I knew someone, whose boyfriend knew Bimla Mehra, who was then the DG (Prisons) and in charge of Tihar (Central) Jail. He could get a letter in front of Mehra. So I sat and drafted the letter over a week. You can't turn back the clock to think, what would have happened if Mrs Mehra hadn't been a woman. Mehra responded with a 'Yes' because there was a cogent argument that if we want to change rapists, we need to understand them. Kiran Bedi was on a panel with me on NDTV and said, "Thank God, you interviewed the rapists" while others said I had given the rapists a platform. And, Kiran Bedi had been DG Prisons in the past. She said she wanted every rapist interviewed after they were in prison to find out what was motivating these men and if there were any factors in common.

Was your request letter to interview only the men convicted in the December 2012 gangrape or others as well?

The first letter was only to interview these rapists. Then, Bimla Mehra asked to have that letter reworded to say "to-be convicted prisoners in general", which I understood and complied with. She had to send the letter to the MHA (ministry of home affairs) to get permission for me to get into the prison because I was a foreigner.

Did the home ministry or the DG, Prisons, ask you about your visa details when you requested permission to interview the men?

No, but they did know that I was working with an Indian co-production company. When you do that, you don't have to apply for a certain category of visa as long as it's a business visa. I had done the same three years ago when filming West is West. If I have done something wrong, why haven't they called me in? Where is the notice that I have done something wrong? They are trying to distance themselves from the issue.

Did the ministry of external issues try to get in touch with you later over the visa issue?

Never. I have been threatened by a BJP spokesperson, Shaina NC, "You know that the government is prosecuting you" at a British TV programme called Chai Chat. Those were her first words to me and I welcomed them prosecuting me because it will enable me to show them that I have done nothing wrong. I did a half-hour panel on NDTV going over all the permissions and paperwork. This is all an attempt to deflect — a smear campaign to divert from the original issue I was filming on. It bounces on a nation that I love and people around the world have laughed and spoken in derision of India because of the ban. And those are the same people who also said, "I had no idea that Indians went out in that scale. These are enlightened people" and then they hear the film is banned. End of love affair.

Did you have a plan to raise the funds?

No I didn't think about that at all as I was impelled by passion and a sense of urgency. Research was the most important first step and, quite early on, I had the instinct that I had to interview the rapists.

How did the deal with the BBC work out?

I went in the day before I flew to India to find out if BBC and Channel 4 would come on board to fund the film because I knew I only had enough resources to get in there and start filming but the edit is a long process. Channel 4 had said to me, "Bring back an interview with a rapist and we might be interested." This I thought was highly cynical and I didn't like that attitude. BBC was supportive but said it was a long process. Nick Fraser said he would support me and I was not from a documentary background. When I was half or three-quarter way through the film, BBC decided to fund it. I didn't get any money until after the filming was over.

Did you coach Mukesh Singh in any way?

You can't just walk into a prison and take a high-security prisoner into a corner with your camera without cast iron permission to chat with him. There's a prison guard during every second of that interview and a film camera rolling. If the guy has learnt his lines for 16 hours of interview, do you not think that there's evidence of that.

Did you try to get any formal interviews with the minister for home affairs?

After the ban, I had 28 hours to board my flight and my film would premier in the UK in four days. Six of seven lawyers did not say that I would be safe in India. They advised me to get on the next flight without packing my bags and not even carry on the phone conversation. The seventh lawyer said I should not go to the airport but that I should drive to Nepal and take a flight from there because the authorities might be waiting for me at the airport.

Did you challenge the ban?

No. I can't even tell you the petitioners' names. I just know there have been four cases so far and I get told because I am very interested in the outcome of this. At the last date, I was told it was adjourned to December 9th. I appreciate NDTV blackening their screen for an hour in protest.

Subsequently, there was a ban on pornography in India which was lifted.