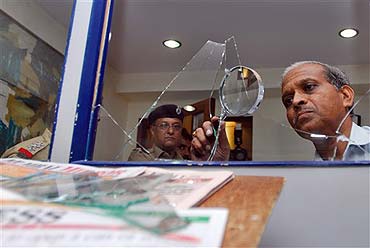 Some goons calling themselves Shiv Saina "activists" forcibly entered the Outlook office on the sixth floor of Raheja Chambers in Nariman Point at around 3 PM today, asked for the "editor" and proceeded to ransack the office and threaten the staff members on being told that there was no senior person around.

And the ostensible reason for this sudden outburst of violence? Their party chief being "portrayed in a negative light" in Outlook's Independence Day special issue, which included Bal Thackeray in a list of villains. 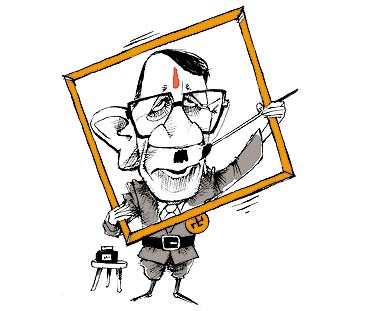 It remains unclear whether the specific objection was to be called a villain, the company Thackeray was made to share (his name featured alongside such personages as Nathuram Godse, Gaya Ram, the faceless terrorist, Jarnail Singh Bhindranwale, Sanjay Gandhi, Narendra Modi, Mohammed Azharuddin, HKL Bhagat, Sajjan Kumar, Jagdish Tytler, Dawood Ibrahim, Beant Singh and Satwant Singh) or the accompanying text and illustration. But as a mute testimony to the accuracy of the short-profile, office equipment, fax machine, photo-copier machine and window panes were left smashed in today's incident. 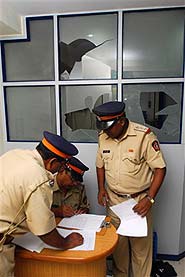 Meanwhile, the Editor's Guild has asked Maharashtra government to provide protection for the magazine and demanded legal action against those who perpetrated the attack and also asked that the "Shiv Sena too should take action against such of its members who have indulged in the attack."

Update: As we write, Shiv Sena on its part has tried to distance itself from the attack with party spokesman Sanjay Raut saying it was the handiwork of a "mob": "I am aware of Sainiks burning copies of Outlook but I don't think the attack on their office was orchestrated by Sainiks. It was a mob attack and the Shiv Sena will not claim any responsibility for it."