'International Mediation Does Not Work'

Excerpts of Tim Sebastian's BBC HARDtalk interview with the National Security Advisor who said India came pretty close to war with Pakistan in early January and then again in May. 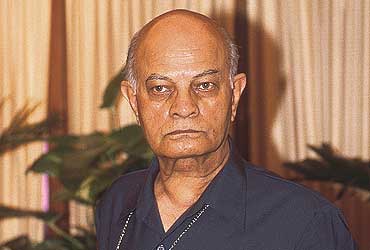 How close did India come to war with Pakistan this last year?

We came pretty close in early January and then again after the massacre in an army camp in the month of May. The army camp was the camp where the families of the soldiers etc were living.

How much pressure inside the government was there to go to war?

What about now? Would it just take a small spark to ignite a conflict?

I don’t think so because some of the objectives we had in relation to the mobilisation of our security forces in the last year and this year, we have achieved them. There is no danger today, but of course if something big were to happen, obviously..

But we hear a lot about the warmongers inside the BJP. B P Singhal, for instance, said in June, ‘‘Any Prime Minister that takes action against Pakistan will sweep the elections.’’ So it leads to the conclusion that your policy is being formed with an eye to the elections rather than to security.

First of all, Mr Singhal is not a member of the BJP, he belongs to what is called the Vishwa Hindu Parishad [Obviously Mr. Mishra confused him with his brother Ashok Singhal. Mr B.P. Singhal is very much a BJP member of the Rajya Sabha from Uttar Pradesh -- Ed] Secondly, I think we have shown in the last four years and more, this prime minister has shown, how responsible he is in conducting the affairs of the government and political or electoral considerations would never arise in his mind if it were a question of going to war.

But it’s safe to assume there are no electoral gains in being nice to Pakistan.

Mr Sebastian, I don’t agree with you at all. There is a vast constituency in this country which would rather not go to war with Pakistan but settle everything through negotiations.

But there are no negotiations. Your government has adopted a hardline stance—no discussions with Pakistan.

It’s wrong to say no discussion with Pakistan. After all, you should remember that it was during the rule of this Prime Minister that the discussions with Pakistan began.

But they have ended now, no substantive talks are taking place now.

As far as dialogue with Pakistan is concerned, it’s not something which is politically bad for the government.

Today, what are we saying? We are saying that we are ready to begin a dialogue with you tomorrow if you give up cross border terrorism.

So it hands a veto to the extremists?

No. It is handing over something to the extremists if you believe that the extremists are not under the control of the Pakistani establishment. On the other hand, if they are sincere, they can stop cross border terrorism tomorrow and we can begin the dialogue day after tomorrow.

Former Israeli Foreign Minister Shimon Peres said that you can negotiate while fighting terror and you can fight terror while negotiating.

We tried that. Cross border terrorism was going on and the Prime Minister invited General Musharraf to Agra.

We don’t talk because there are certain conditions which have to be met.

The American view is that you should talk to Pakistan.

They are mounting pressure. You are being seen in some capitals as the problem, not the solution.

That is a very strange logic, when we don’t send terrorists across the line of control or across the border to Pakistan.

So you are saying that Pakistan has done nothing to stop terrorists?

It has done absolutely nothing.

Why does your army chief then say infiltration is down 54%—a fairly precise figure?

The General didn’t say that it had came down due to the efforts of the Pakistani establishment. What he said was that it is down because we put pressure.

Because the west, America put a lot of pressure.

It is difficult for me to quantify what the pressure from the Americans or the British was but it did not succeed.

You give the impression that you don’t actually want the terrorism to stop because if it did, you don’t have any new thinking to offer on Kashmir.

Why do you say we don’t have anything to offer? After all, who has begun the process of negotiations?

And who has stopped the process?

Obviously we stopped it when cross border terrorism achieved a height never known before. An attack on the Parliament of India is something which has to be taken very seriously and I must confess that we are surprised that the west has not taken it that seriously.

I didn’t say I was satisfied, I said I won’t quantify the pressure that they put on.

In September you were in New York, you told PTI, Bush spoke in very strong terms to President Musharraf about the need to stop cross border terrorism. On June 24, the US said that Deputy Secretary Armitage was given assurances by President Musharraf on June 6, that the ending of infiltration across the line of control will be permanent.

And now the Americans have themselves admitted that President Musharraf did not carry out the promises which he made.

But it wasn’t due to a lack of pressure from the Americans, was it?

A month after saying that Bush had put pressure on General Musharraf, your Foreign Minister goes to London and attacks the west for not doing enough to rein in Pakistan.

The PM met President Bush in New York on 12th September, two days before that, one of the candidates for the elections in J&K was killed by terrorists. When Prime Minister Vajpayee and President Bush were in conversation, this topic came up. We said it is strange, here we are trying to put through a democratic process in J&K and terrorists are blocking that. President Bush said this is not a good thing and he said he would speak to President Musharraf the same day. He did. Despite that, more candidates were killed in Jammu and Kashmir after the 12th of September.

Why does your foreign minister then berate the west for not doing enough?

I don’t know what the foreign minister has said.

Okay, I have no quarrel with that.

Are you happy with what Washington and London have done?

We are happy with what Washington and London have done but not happy with the results which have come because we were promised much more. We were told that General Musharraf will have to carry out his promises. Because these promises are to the US and UK.

Because we have had very bad experience with the international community on dispute settlement. We have the example of the Middle East or west Asia as we call it, for the last 57 years or whatever.

You haven’t done much better, have you?

They have been trying to do it and look at the result.

And you have been trying to do it and look at your result!

Our results are much better than what they have done, in fact the Middle East is an example to us. That international mediation does not work. Number two, there is an agreement between India and Pakistan, signed in Shimla in June 1972, that all matters will be settled bilaterally between the two countries.

If those who attacked the World Trade Center had been Kashmiris, do you think America would leave you to sort out the problem by yourself?

But we are going to sort out the problems by ourselves.

By not talking to Pakistan.

It will change, whenever the conditions change from Pakistan’s side.

You can’t blame Pakistan for everything that goes wrong in Kashmir. You can’t blame it for the persistent human rights abuses attributed to the security forces, for the corrupt and inefficient government that’s been voted out...

We don’t blame Pakistan for everything. We say you have a state policy of facilitating, instigating terrorism in Jammu and Kashmir and other parts of India.

They say they don’t.

They are lying, we know that. They lied in the run-up to Kargil in 1999. They lied so much they couldn’t tell their own people that we can’t bury your soldiers as soldiers.

Will the Prime Minister go to the regional summit in Islamabad in January?

If the summit addresses the core issues which are related to SAARC.

So, you haven’t made up your mind?

What I am saying is if these ideas which have been put forward in Kathmandu, and there was an agreement to implement them by the end of December, if that happens, we could consider it. In the absence of any substance, it’s very difficult for the Prime Minister to go.

But you know better than I do that there is symbolic significance to this summit.

Well, there is always that kind of a thing. It happened in Kathmandu.

And you don’t see the value of such a symbolic meeting taking place?

Isn’t there a much greater threat to national security now from inter-communal violence than from Pakistan?

No, not at all. First of all, the government itself has condemned the communal violence in Gujarat.

It did nothing to stop it.

The Prime Minister himself said it’s a blot on the nation. We have tried to do everything possible, what can the Centre do in Gujarat? Number two, it did not spread to other parts of India.

Why was it allowed to happen?

It was not the Centre that allowed it to happen.

A lot of people seem to want you out of your job.

I wouldn’t say there are a lot of people who want me out of the job but I will go whenever the Prime Minister wants me to.

The Prime Minister doesn’t have long to go, so your tenure is not so long.

No, his position is very secure. As far as the Prime Ministership is concerned.

In the BJP his position is secure?

And in that time we can expect no progress whatsoever with Pakistan, again for electoral reasons, which I know you denied earlier?

You can expect some progress with Pakistan, if Pakistan is convinced that it will not be able to get rid of fundamentalists and extremists, religious extremists, in a mode of confrontation with India.

Unfortunately, one fact which is not recognised in the west is that the Pakistani establishment cannot have the privileges, and I am talking especially about the armed forces, without a confrontation with India.

I quote General Musharraf to you, in 1999 before he took over, he said even if Kashmir is solved, relations with India will not be better.

Despite that the view of the west is he has done his best.

No, we don’t believe he has done anything at all.

So you won’t moderate your line?

You are not seen that way outside.

We are moderates. But we are not going to come under pressure and say, you negotiate with Pakistan while a pistol is put to your head. We will not do that and we will never do that, regardless of what pressure happens. But tomorrow Pakistan shows sincerity, tells us and implements no more cross border terrorism, day after tomorrow we will sit down with them.