The 'foreign hand', instead of being the CIA's turns out to be the KGB's, if one were to go by the latest brouhaha over extracts from a book published in the Times of London. Updat 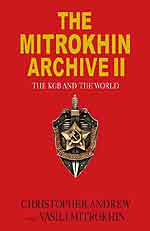 The 'foreign hand', instead of being the CIA's turns out to be the KGB's, if one were to go by the latest brouhaha over extracts from a book published in today's Times of London. Not that it is an earthshakingly new revelation, but The Mitrokhin Archive, Volume II: the KGB and the World by Christopher Andrew and Vasili Mitrokhin, to be published by Penguin will definitely cause embarrassment to the Congress and "individuals and media associated with the CPI [the Communist Party of India]".

In the past, such claims have been dismissed by the accused, but the details this time around are more discomfiting. The report in the Times claims that "a huge cache of KGB records smuggled out of Moscow after the fall of communism reveal that in the 1970s India was one of the countries most successfully penetrated by Soviet intelligence. A number of senior KGB officers have testified that, under Indira Gandhi, India was one of their priority targets."

"Indira Gandhi never realised that the KGB’s first prolonged contact with her occurred during her first visit to the Soviet Union, a few months after Stalin’s death in 1953. As well as keeping her under continuous surveillance, the Centre (KGB headquarters) also surrounded her with handsome, attentive male admirers."

By May 1962, the KGB in New Delhi was working to strengthen (V K Krishna) Menon’s position and enhance his personal popularity, probably in the hope that he would become Nehru’s successor, but Moscow’s "main reason" was to "prevent the rightwing Hindu traditionalist Morarji Desai."

The Russian presence in India had got a fillip particularly at the time of the Bangladesh crisis in 1971, when in August of that year, Indira Gandhi had signed a Treaty of Peace, Friendship and Co-operation with the Soviet Union. "In the early 1970s the KGB presence in India became one of the largest outside the Soviet bloc. Indira Gandhi placed no limit on the number of Soviet diplomats and trade officials, thus allowing the KGB and Soviet intelligence as many cover positions as they wished."

Christopher Andrew, the Cambridge historian who co-operated with Mitrokhin after his defection to Britain, says in his account that the KGB overestimated its own influence. It also failed to anticipate the backlash against Mrs Gandhi after her imposition in 1975 of the state of emergency. Despite spending some 10.6 million roubles (more than £10 million in old exchange rates) on influence operations to support Mrs Gandhi and undermine her opponents, Moscow did not foresee the sudden end of emergency rule, according to the book. Her landslide defeat in the elections of 1977 brought Moraji Desai, one of the KGB's main stumbling-blocks, to power, and even when Mrs Gandhi returned to office, relations with Moscow were never as close again.

After Indira Gandhi's loss at the hustings in 1977, the Delhi office of the KGB "set up an active-measures fund codenamed DEPO in an attempt to buy influence within the Committee for Democratic Action founded by Mrs Gandhi, in May 1977". By July the "fund had available 275,000 convertible rubles"..

In 1992, 70-year-old Vasili Mitrokhin, his family and six large containers of KGB documents that he had secretly copied over 12 years and hidden beneath his dacha were smuggled by British intelligence out of Russia. The FBI had called the Mitrokhin archive "the most complete and extensive intelligence ever received from any source". Mitrokhin died in Britain last year and this is the second book to be based on the documents procured through him.

Oleg Kalugin, who became head of Foreign Counter-Intelligence in 1973, remembers India as "a model of KGB infiltration of a Third World government".He recalls one occasion when the KGB turned down an offer from an Indian minister to provide information in return for $50,000 on the grounds that it was already well supplied with material from the Indian foreign and defence ministries: "It seemed like the entire country was for sale; the KGB — and the CIA — had penetrated the Indian government. Neither side entrusted sensitive information to the Indians, realising their enemy would know all about it the next day." The KGB, in Kalugin’s view, was more successful than the CIA, partly because of its skill in exploiting the corruption that became endemic under Indira Gandhi’s regime. Suitcases full of banknotes were said to be routinely taken to her house and one of her opponents claimed that Mrs Gandhi did not even return the cases.

The Prime Minister is unlikely to have paid close attention to the dubious origins of some of the funds that went into Congress’s coffers. That was a matter she left largely to her principal fund-raiser, Lalit Narayan Mishra, who, though Mrs Gandhi doubtless did not realise it, also accepted Soviet money. Short and obese, Mishra looked the part of the corrupt politician. Indira Gandhi, despite her own frugal lifestyle, depended on the cash he collected from various sources to finance her party. Money also went to her son and anointed heir, Sanjay, whose misguided ambition to build an Indian popular car and become India’s Henry Ford depended on government favours.

When Mishra was assassinated in 1975, Mrs Gandhi blamed a plot involving "foreign elements" — doubtless intended as a euphemism for the CIA. The Delhi KGB residency gave his widow 70,000 rupees, though she doubtless did not realise the source. Though there were some complaints from the Communist leadership at the use of Soviet funds to support Mrs Gandhi, covert funding for the Congress Party of India seems to have been unaffected.

By 1972 the import-export business founded by the CPI to trade with the Soviet Union had contributed more than 10 million rupees to party funds. Other secret subsidies, totalling at least 1.5 million rupees, had gone to state Communist parties, individuals and media associated with the CPI. The funds that were sent from Moscow to party headquarters via the KGB were larger still. In the first half of 1975 they amounted to over 2.5 million rupees.

According to KGB files, by 1973 it had on its payroll ten Indian newspapers (which cannot be identified for legal reasons) as well as a press agency. During 1972 the KGB claimed to have planted 3,789 articles in Indian papers.

Watch this space for angry rebuttals and denials from the parties named.

The Outer Limits Of Empire