World's top two Test teams - India and New Zealand- will fight it out in the final in Southampton from June 18-22. 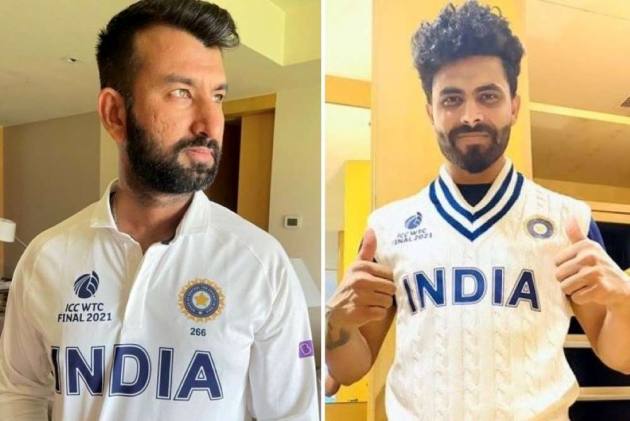 Ravindra Jadeja and Cheteshwar Pujara revealed the new kits that India will wear in the World Test Championship final against New Zealand at Southampton from June 18 to 22. (More Cricket News)

Team India is presently serving a hard-quarantine in Mumbai ahead of their departure to England.

Batsman Pujara took to the social media to post the picture of him shadow practicing in his room.

The jersey has “ICC WTC Final 2021” on the right side, with BCCI’s logo and ‘India' written. The batsman captioned the picture as, “When in quarantine, work from home!”

While New Zealand are already in England for a bilateral series against the hosts, the Virat Kohli-led Indian team will arrive in the UK on June 3 after completing a 14-day quarantine period in India.

The Indian team will enter UK after completing 14-days in a bio-bubble in Mumbai with six RT-PCR negative tests.

Some of the players like R Ashwin, Mayank Agarwal, Washington Sundar have now been allowed to use the hotel gymnasium after a week-long room quarantine and three negative tests.

However, a few like skipper Virat Kohli, his white ball deputy Rohit Sharma, all of whom joined late will have a complete room quarantine before boarding the UK flight. They have been provided with some gym equipments inside their rooms.