All the numbers you need to know from Day 4 of first Border-Gavaskar Trophy Test match between Australia and India at Adelaide. 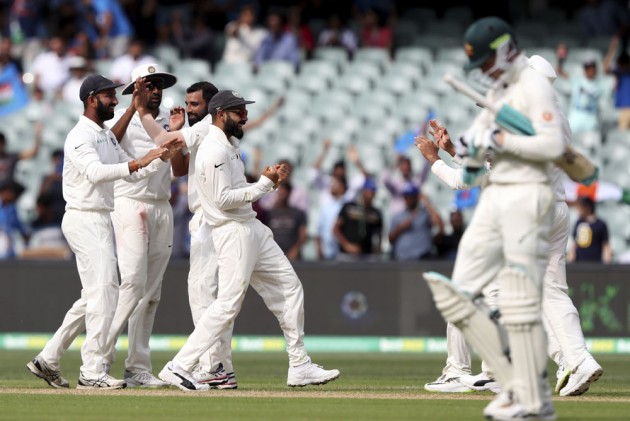 India inched closer to sealing a historic Test win at Adelaide thanks to bowlers, who have once again exposed the chinks in Australian batting line-up leaving the hosts tottering at 104 for 4 in pursuit of a tough target of 323 on the fourth day of the first Test at Adelaide on Sunday.

With 219 runs required on a fifth-day track, it will be a huge ask for the Australian lower-order batsmen to counter a buoyant Indian bowling attack. Ravichandran Ashwin (2/44 in 19 overs) and Mohammed Shami (2/15 in 9 overs) were impressive during the final session as Australia lost three wickets in Marcus Harris (26), Usman Khawaja (8) and Peter Handscomb (14).

- Cheteshwar Pujara becomes 4th Indian to face 200 and more deliveries in both the innings of an away Test match, after Vijay Hazare (vs Australia, Adelaide, 1948), MAK Pataudi (vs England, Leeds, 1967) and Rahul Dravid (vs New Zealand, Napier, 2009)

- The last player to do so in Australia was South African Peter Kirsten, also at Adelaide, in 1994.

- India hit nine sixes in the match, which is the joint highest for them in an away Test. in 2006, India hit nine maximums against Pakistan at Faisalabad. They have also done it against England at The Oval in 2007 and Sri Lanka in Colombo last year.

- Also, Muralitharan at SSC, Colombo and Lyon at Adelaide are the only spinners with three five-wicket hauls against India at a venue.