The cheif of MQM threatens to write an open letter to Indian muslims and to begin talks with Indian prime minister. 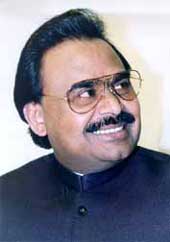 "Nothing is impossible," he said, adding, "Whether I make it possible or the ruling establishment of Pakistan, only time would tell."

(If I meet the prime minister of India, or the politicians of India, I shall not do it seceretly, but shall do it openly, publically ... because I am not afraid of anyone... and nothing is impossible)

Hussain had recently told PTI in London that he planned to visit India and meet the prime minister, besides visiting his ancestral home in Agra.

He had said he would be writing to the Indian government seeking permission to visit India to talk to Vajpayee.

The MQM leader, who is in self-exile in London, was also quoted in the Pakistani daily, The Nation, as saying that he would meet Indian leaders and apprise them of the "injustice" against mohajirs in Pakistan.

Hussain also warned Islamabad not to repeat "past mistakes" which had led to dismemberment of Pakistan and formation of Bangladesh.

While threatening to launch a "mohajir bahini", he said "the people will not wait for whether I call for forming mohajir bahini or not. It is retribution. If the prevailing things do not change, atrocities on them are not stopped and they are denied their due rights, they can do this at any time".

Hussain said "the reality is that we are neither terrorists not believe in terrorism".

On the proposed summit between Musharraf and Vajpayee, he said Vajpayee's invitation to the Pakistani military ruler for talks was "a good step towards establishment of peace in the region .... And hopefully it will help resolve the Kashmir issue through negotiations."

The MQM chief said "I appeal to the present rulers, army and the establishment not to repeat the past mistakes which led to the dismemberment of Pakistan."

Stating that he would write an open letter to Indian muslims, the MQM chief said he would appeal to them "to hold rallies in India in order to convey this to the Indian government as well as human rights organisations to apprise them of the treatment being meted out to mohajirs in Pakistan".

When asked about his controversial statement about the two-nation theory, Altaf Hussain said, "Events of the past 54 years have proved the theory to be a failure."

He said that the Muslim minority provinces like UP and Bihar were in the forefront of the Pakistan movement but the borders of Pakistan were closed to the Indian Muslims in 1951.

"The only Muslim-majority province to have supported Pakistan movement was Bengal but Bengalis were called traitors in Pakistan and they were forced to secede. A theory that divides the Indian Muslims into three parts cannot be supported."

Quizzed whether his recent marraige to a Sindhi lady was a political alliance, Hussain said, "It was a match arranged by his family and was not a love marriage."

The leader of MQM, a group that is trying to build a bridge with like-minded parties in Pakistan, said, "The country needs a new constitution which will give equal rights to all provinces."

Towards the end of the programme he was asked about his favourite poet, and true to from he recited Allama Iqbal's

Interestingly, when ex-prime miniter I.K. Gujral was recently asked about Pakistan ambassador and foreign minister wanting Musharraf to meet Hurriyat during his upcoming Indian visit had reposted that it was somewhat analogous to an Indian prime minister visiting Pakistan and meeting Altaf Hussain of MQM