Follow updates and score from the third ODI match between India and Australia, being played at former India captain Mahendra Singh Dhoni's home ground in Ranchi 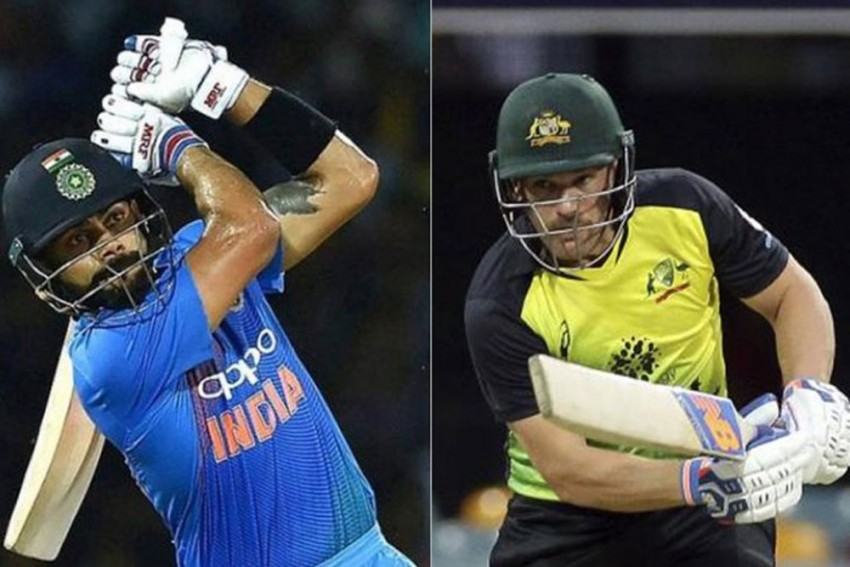 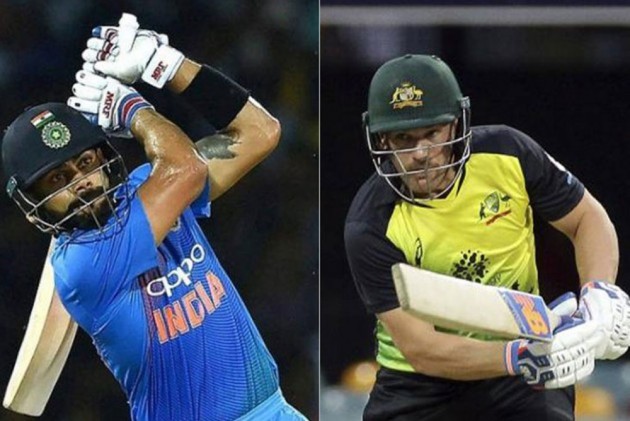 Virat Kohli looked like a 'Man on a Mission' wearing the camouflage army cap for the better part of his 41st ODI hundred but that wasn't enough to prevent India from losing the third ODI against Australia by 32 runs.

It was yet another superlative effort from the Indian skipper, who lacked adequate support from the other end as Australia kept the five-match series consequential going into the fourth game in Chandigarh on Sunday.

Pat Cummins got the last wicket, that of Kuldeep Yadav, caught at mid-off by Aaron Finch. Australia won by 32 runs to keep the series alive.

And that brought Jasprit Bumrah in the centre. After 48 overs, India were 281/9, still needing another 33 runs.

41st ODI hundred for Virat Kohli, second in a row. Took 85 balls, with the help of 14 fours. He took a double off the fifth ball of the 35th over

Earlier, Adam Zampa trapped Kedar Jadhav in front and with that a 88-run stand came to an end. FoW - 174/5 (31.4 Over). Vijay Shankar joined skipper Virat Kohli.

India need another 154 runs in 19 overs. India were 160/4 with Virat Kohli nearing yet another hundred. He just hit Jhye Richardson for back-to-back fours. The 30-year-old was unbeaten on 90 off 75 with 13 fours. He already added 83 runs in 71 ball for the sixth-wicket stand with Kedar Jadhav (26 off 37). 32 of those runs have come in the last five overs.

Virat Kohli brought up his 50th fifty with a single off the first ball of the 24th over, bowled by Marcus Stoinis. He took 52 deliveries. The skipper then punished the Aussie pacer with two back-to-back fours. India were 117/4 after 24 overs, still needing 197 runs.

Adam Zampa bowled MS Dhoni to silence the crowd. Going for the big shot, the former India captain ended up getting a thick edge, and into the stumps. FoW - 86/4 (19.1 Over). And with that a 59-run fifth-wicket stand was broken.

What a delivery! Pat Cummins produced a magical ball to breach Ambati Rayudu's (2 off 8) defence. But Ranchi crowd seemed to have no issue. Even celebrated. For their own MS Dhoni was coming.

A maiden wicket. India were 27/3 after seven overs.

Rohit Sharma too gone. Pat Cummins trapped him in front, LBW. Aussies review and it returned positive even though Rohit claimed that there was a nick. FoW - 2/15 (4.3 over). But the over ended with a sumptuous drive from Virat Kohli. India were 22/2 after five overs.

Shikhar Dhawan's poor form continued. Jhye Richardson had him caught at gully by Glenn Maxwell. Brilliant take. FoW - 11/1 (3.3 Over). Virat Kohli joined his deputy Rohit Sharma (10 off 11) in the centre.

Cautious start from the Indian openers Rohit Sharma (o off 5) and Shikhar Dhawan (1 off 7). India were1/0 after two overs. Pat Cummins conceded the only run so far from the first over of the innings, then Jhye Richardson followed it up with a maiden.

Indian bowlers found themselves in unfamiliar territories for the most part of the innings with Aussie openers showing class and aplomb. Indian fielders also committed elementary mistakes, including dropping easy chances, to make things worse for skipper Vira Kohli.

Kuldeep Yadav was the pick of Indian bowlers, but Mohammed Shami was brilliant in the start.

India will be happy to concede 313 runs after seeing that huge 193-run opening stand between Aaron Finch and Usman Khawaja. Jasprit Bumrah was hit for two fours, one each by Alex Carey and Marcus Stoinis. But still a good total for the visitors.

Kuldeep Yadav got two wickets in a space of three balls as India clawed back into the contest. The chinaman bowler first had Shaun Marsh (7 off 12) caugt at long on by Vijay Shankar off the second ball, then trapped Peter Handscomb (0 off 2) in front.

MS Dhoni just affected the most outrageous run out to send Glenn Maxwell (47 off 31) back. Shaun Marsh played the last ball of the 42nd over towards cover, but Ravindra Jadeja stopped it with a brilliant effort than relayed it for the wicketkeeper. Dhoni just directed the ball, and Maxwell walked off. FoW - 258/3 (42 over). Marcus Stoinis was the new man.

Maiden ODI ton for Usman Khawaja with a single off the last ball of 37th over, bowled by Ravindra Jadeja. He took 107 bals to reach the landmark. Australia were 232/1 after 37 over with Glenn Maxwell already on 31 off 16.

Kuldeep Yadav provided the much needed breakthrough. Trapped Aussie skipper Aaron Finch (93 off 99) LBW. Australia also wasted the review. FoW - AUS 193/1 (31.5 Over). This was the fourth highest opening stand against India in India.

Aussie openers Aaron Finch (92 off 95) and Usman Khawaja (91 off 91) continued to punish Indian bowlers, and both have moved into the nineties. Australia were 191/0 after 31 overs.

Both the Aussie openers inching closer to their respective hundreds. They have already added runs 161 in 156 balls as Indian bowlers seemed to have lost the plot in Ranchi. Aaron Finch and Usman Khawaja are unbeaten on 78 off 80 and 76 off 76 respectively.

After the Drinks, Mohammed Shami, who needed medical attention after being hit by a straight drive from Aaron Finch in the fifth over, returned to action.

And both the Aussie openers have posted individual fifties. Last time both openers scoring fifties against India in India was in 2017, by Finch and David Warner.

Very good start from the Aussie openers, 88/0 after 15 overs. Aaron Finch (39 off 42) punished Kedar Jadhav with a six off the first ball, requiring the match officials to change the ball. Usman Khawaja (43 off 44)

In his first over, the part-time spinner has leaked 13 runs.

Meanwhile, Virat Kohli has so far used six bowlers in Mohammed Shami, Jasprit Bumrah, Ravindra Jadeja, Kuldeep Yadav, Vijay Shankar and Jhadav. Shami has been the most economical of the lot, having conceded only seven from three overs.

Early review for India. Jasprit Bumrah hit Aaron Finch in the front with his fourth delivery of the day. And India wasted. The ball going over the stumps.

In the previous over, Mohammed Shami conceded four runs with Usman Khawaja hitting the third ball for a four.

Australia were 14/0 after two overs.

Indian team members are wearing specially designed cap as a tribute to the Armed Forces. Before the toss, MS Dhoni presented them with the caps. And they are donating match fees to the Nation's Defence Fund.

Virat Kohli just won the first toss of the series, and India will bowl first. India are unchanged, while the Aussies have made one, bringing Jhye Richardson in for Nathan Coulter-Nile.

Mahendra Singh Dhoni, probably playing for the final time at his home ground, is the cynosure of all eyes as India take on Australia in the third ODI at Ranchi.

The 37-year old former India captain, who has led the country to two World Cups, will be playing his fourth ODI at the JSCA International Stadium.

In the last three ties, India have won one, lost one and rain washed the third match.

Dhoni has batted only twice in Ranchi in which he has scored 10 not out (vs England on October 23 of 2013) and 11 (vs New Zealand on October 26 of 2016). In terms of wicket-keeping on his home turf, Dhoni has three catches and a stumping in Ranchi.

What will keep Dhoni's supporters going is the fact that in his recent form. Dhoni has already collected 301 runs from just eight matches at a staggering average of 100.33 in the ongoing season ahead of the World Cup.

Dhoni also recently joined the likes of Sachin Tendulkar, Sourav Ganguly and Rahul Dravid in an elite list of Indian batsmen to have scored over 13,000 runs in List A cricket.

India's two victories -- by six wickets and eight runs -- weren't exactly convincing but pulling off close matches under pressure will certainly add to the confidence.

Talking about the visitors, it was their match to win in the last game and the lack of character shown would worry the team management. The Aussies did well to restrict India to 250 and were on course for most parts of the match. Marcus Stoinis held one end up with a defiant half-century but ran out of partners as Jasprit Bumrah showed why he is considered the best in the business.