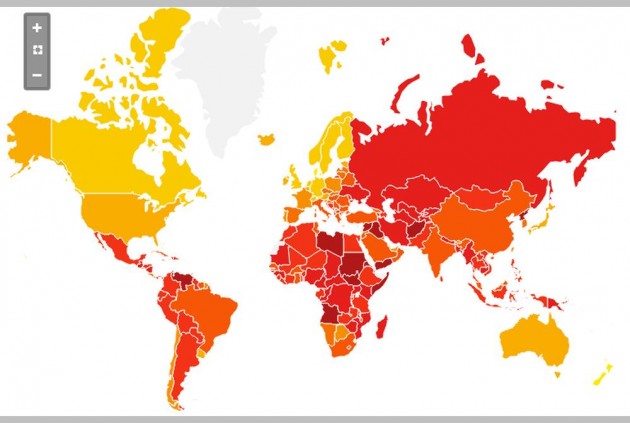 India has been ranked way lower in corruption than all its neighbouring countries, except Bhutan which is at an enviable squeaky-clean position on top of the corruption index list released by graft watchdog Transparency International on Wednesday.

In the corruption perception index for 2016, India was ranked 79 on the index, above Pakistan at rank 116, but shared the position with China with a score of 40, which is 2 points better than last year. Bhutan is ranked 27 on the list with a score of 65.

The Corruption Perceptions Index ranks countries and territories based on how corrupt their public sector is perceived to be by "business people and country experts", which in way has hamstrung the index from telling the entire story on corruption in a country.

"It is a composite index, a combination of surveys and assessments of corruption, collected by a variety of reputable institutions," says Transparency International.  A country’s score indicates the perceived level of public sector corruption on a scale of 0 — 100, where 0 means that a country is highly corrupt and 100 means it is perceived as very clean.

In 2015, India’s rank was 76 with a score of 38, a slip of 3 ranks. The most corrupt countries are Somalia, South Sudan, North Korea and Syria and the most clean are Denmark, New Zealand with 90 points each.

Transparency International said: "India’s ongoing poor performance with a score of 40 reiterates the state’s inability to effectively deal with petty corruption as well as large-scale corruption scandals. The impact of corruption on poverty, illiteracy and police brutality shows that not only the economy is growing – but also inequality".

“Over two-thirds of the 176 countries and territories in this year's index fall below the midpoint of our scale of 0 (highly corrupt) to 100 (very clean). The global average score is a paltry 43, indicating endemic corruption in a country's public sector,” said the group.

According to Transparency Internation, “The majority of Asia Pacific countries sit in the bottom half of this year’s Corruption Perceptions Index. Poor performance can be attributed to unaccountable governments, lack of oversight, insecurity and shrinking space for civil society, pushing anti-corruption action to the margins in those countries”.

"In too many countries, people are deprived of their most basic needs and go to bed hungry every night because of corruption, while the powerful and corrupt enjoy lavish lifestyles with impunity," said José Ugaz, the Chair of Transparency International

The lowest ranked nations were, according to the group, all plagued by “conflict and war, poor governance, weak public institutions like police and the judiciary and a lack of independence in the media.”

The majority of Asia Pacific countries, including India, sit in the bottom half of the Corruption Perceptions Index 2016. 19 out of 30 countries in the region scored 40 or less out of 100.

The only solace for the region is Afghanistan, which has moved up four points in its score (15 out of 100). It still remains one of the 10  most corrupt countries on the index, its score is nearly the double from 2013 (8 out of 100).

Transparency International has warned against assuming that the country/territory with the lowest score is the world's most corrupt nation.

"The CPI is an indicator of perceptions of public sector corruption, i.e. administrative and political corruption. It is not a verdict on the levels of corruption of entire nations or societies, or of their policies, or the activities of their private sector."