The union minister visited the Zojila tunnel, which will be the longest tunnel in Asia, and reviewed the progress of work. 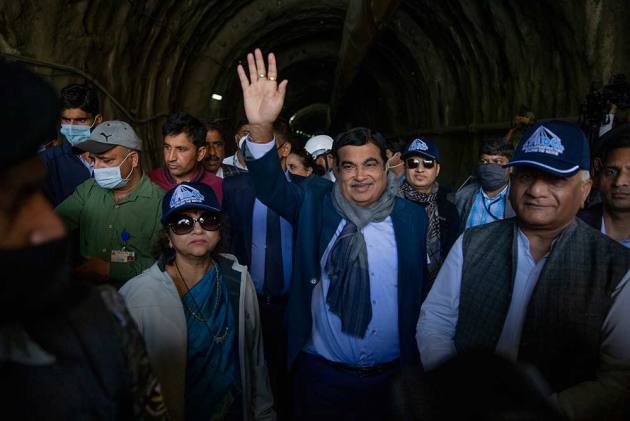 Union Minister for Road Transport and Highways Nitin Gadkari Tuesday carried out a detailed examination of the construction work of the Zojila tunnel and Z-Morh tunnels in Jammu and Kashmir.

The minister said the work on the projects is challenging and difficult but with the strong political will of the government, it will be completed in time.

Gadkari, who is on two-day visit to Jammu and Kashmir, visited Zojila and Z-Morh tunnels a day after laying the foundation stones for four national highway projects worth Rs 3612 crore in J&K, including the commencement of the Srinagar Ring road project.

“Zojila tunnel will be the longest tunnel in Asia. And the most important thing is the government of India under the initiative of the Prime Minister have taken the decision to start the work.  This is very difficult work. A lot of problems are there. Whatever challenges are there we can overcome them with our strong political will,” Gadkari said.  He was flanked by the Union Minister of State for Road Transport and Highways General (Retd.) V.K. Singh.

Gadkari said all are working on the projects under difficult and challenging situations. He said the way the work is being carried out on the projects would be completed within time.

“It will create employment opportunities for Ladakh and Kashmir. “We are spending more than one Lakh crores on tunnel projects in Jammu and Kashmir and Ladakh,” he added.

“I am satisfied with the speed of the construction,” the Minister said addressing a press conference after the detailed inspection of the projects. He said he has directed that construction work of the approaching tunnels should complete before May 2024.  He said this would help the government to show the opposition what it has achieved.

Last year in October the first ceremonial blasting of Zojila Tunnel, the longest tunnel road in Asia, was carried out. With a length of 14.83 km, the tunnel would be the longest bi-directional tunnel in Asia connecting Kashmir Valley to the Ladakh region making the road fair weather. While the Z-Morh tunnel is 6.5 km long and will provide all-weather connectivity to Sonmarg. The project was first conceived in 2005 and its detailed Project Report (DPR) was prepared by BRO in 2013. The Project was eventually given to NHIDCL in July 2016 for implementation on EPC mode.

Zojila pass is situated at an altitude of 11,578 feet on the Srinagar-Kargil-Leh highway. The highway remains closed during winters, from December to April, due to heavy snowfall and avalanches on Zojila pass cutting off the Leh-Ladakh region from Kashmir and the rest of the country.

On Monday Gadkari, laid the foundation stones for four National Highway projects worth Rs 3612 crore in Jammu and Kashmir, including the commencement of the Srinagar Ring road project.

Gadkari termed road connectivity as a key driver of the socio-economic growth and development of any region.

“There is no dearth of funds in the ministry. I ensure you to bring in logistic support of every kind that is beneficial for the tourism and economy of J&K,” Gadkari said.

“The new projects will further strengthen the road connectivity in J&K, thus opening up new livelihood avenues for the local population, enhancing tourism & business activities improving the quality of life of the people, he added.

“Our endeavour is to lessen the time travel between the cities of India tremendously. Be it Delhi-Jammu, or Jammu to Srinagar, the time to travel would get reduced to half by providing expressways and better road connectivity to the people. Mega Highway road and tunnel projects will reduce the travel time from Delhi to Kashmir to 8 hrs in coming years,”he said.

He said the long-pending prestigious Srinagar Ring Road project would be completed by end of 2023. Besides, the work on Srinagar-Jammu National highway would be completed in next 2-3 years bringing in much respite for the people of J&K, he added. He also advocated introducing eco-friendly measures in transport sector.

‘Till 2014, there were only 7 National Highways in the erstwhile Jammu Kashmir including Ladakh. In 2021, the number of National Highways has increased to 11 in J&K alone. In 2015, PM had announced road infra projects worth Rs 40,900 crores for J&K, out of which work on projects of about Rs 38,000 crores is already underway’, J&K governor Manoj Sinha said thanking Gadkari for the speedy execution of national highway projects.