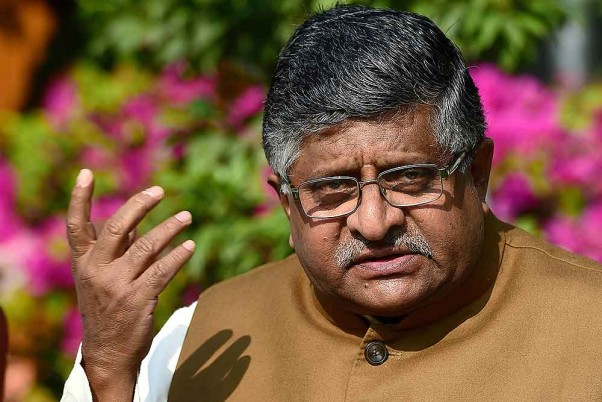 Union IT and communications minister Ravi Shankar Prasad on Thursday said the government was very keen to promote India as a very big centre of the data economy and would finalise a data protection law very soon.

"I'm very keen to promote India as a very big centre of the data economy. Data is going to drive the digital economy. It is also going to drive international commerce," he said.

"We are going to finalise a data protection law very soon. India is waiting for its movement for data economy, data innovation, data refinery. I would urge the chief minister (of Karnataka) to ensure that the state becomes a great centre of India's data economy," he added.

Organised by the Karnataka government, along with Karnataka Innovation and Technology Society, the state government's Vision Group on Information Technology, Biotechnology & StartUp and Software Technology Parks of India, the summit, that saw the inaugural address by Prime Minister Narendra Modi, is scheduled to take place from November 19 to 21.

Prasad said even during the pandemic the communications sector witnessed a growth of over seven per cent and also received significant investments from major global companies.

"It is a challenging time and we decided to convert it into an opportunity.  The global manufacturing world was looking towards alternative destinations. In view of India's enormous success in mobile manufacturing, we came up with a big idea of production linked incentive," he said.

Prasad said major global companies, including from India, have committed to invest close to Rs 11 lakh crore in the next five years and proposed to manufacture mobiles and components, out of which Rs seven lakh crore would be only for exports.

Addressing Chief Minister B S Yediyurappa, Prasad said he wanted to give him some very good information, which was that during the Covid-19 pandemic, the government has got Apple to shift nine of their operating units, along with components, from China to India.

"In your city of Bengaluru, the Apple company has started production to manufacture its quality phones for India and also for abroad for exports," he said.

Prasad noted that the summit was taking place in very challenging times and the COVID pandemic created a lot of problems, but said the digital ecosystem gave the opportunity.

"Also now we have made the regulations very clear that not only work from home, work from anywhere to promote the cause of gig economy in India in which Bengaluru again has to play a crucial role."
He also said that the approach to Artificial Intelligence is that it should lead to the inclusion and empowerment of ordinary Indians.

"I must also emphasise that AI should respect the ethical and cultural values of India," he said.

Prasad lauded the "stellar role" played by Bengaluru in propelling India's IT story on the global stage.

"Looking into this department for the last close to six years, whenever I analyse the growth of India's IT road map, I always see that Bengaluru coming with shining colours," the minister said.