Home  »  Website  »  National  »  Who Clicked Photos Of Kashmiri Child Sitting On Bullet-riddled Body Of His Grandfather?

Who Clicked Photos Of Kashmiri Child Sitting On Bullet-riddled Body Of His Grandfather?

Kashmiris on Twitter are asking questions about who clicked the photo of the toddler sitting on top of his grandfather's body at the gunfight site even when no photojournalists were present at the spot. 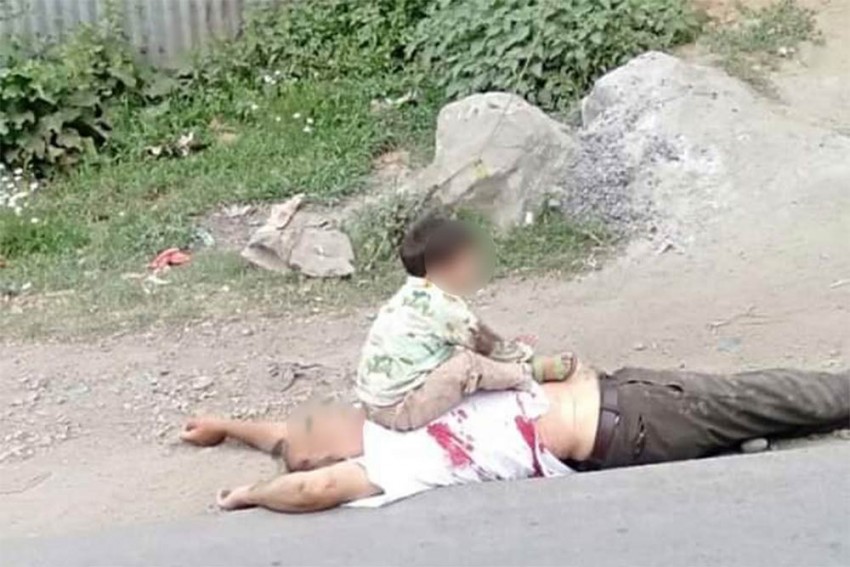 Three-year-old Ayaad sitting over the body of his grandfather after he was killed during a militant attack in Jammu and Kashmir's Sopore
Naseer Ganai 2020-07-01T14:47:07+05:30 Who Clicked Photos Of Kashmiri Child Sitting On Bullet-riddled Body Of His Grandfather?

Soon after militants attacked security forces in North Kashmir’s Sopore town, photos emerged on social media showing a three-year-old child sitting on top of the body of his grandfather. While the images of the child evoked condemnation, questions are also being raised about who captured the photos at the gunfight site and shared them on social media, even when there were no photojournalists present.

A CRPF Head Constable and a civilian, Bahsir Ahmad Khan, were killed Wednesday morning when the militants opened fire at a naka party in Sopore.

Soon after the attack, photos of the deceased’s grandson, sitting on top of his grandfather’s bullet-riddled body, were widely shared on social media. Later, the Jammu and Kashmir police posted a photo on Twitter showing a policeman carrying the child. On its Twitter handle, the J&K Police said the child was “rescued from getting hit by bullets during a terrorist attack”.

A video also surfaced that showed the three-year-old child inside a police vehicle, crying, while the cops try to console him.

Officials from both the CRPF and the Jammu and Kashmir Police said they don’t know who took the pictures of the civilian’s grandson.

“Yes, pictures have been taken. But who took the pictures is a matter of the investigation,” Senior Superintendent of Police (SSP) Sopore Javaid Iqbal said.

A CRPF spokesperson told Outlook that at the time of the attack, there were no photojournalists present at the spot who could have possibly taken the photo of the child.

“It was not an operational encounter and there was no photojournalist present at the place,” said the CRPF spokesperson Junaid Khan.

Commenting on the photo of the child, former Jammu and Kashmir Chief Minister Omar Abdullah wrote on Twitter: “Everything becomes a propaganda tool in the bloody violence in Kashmir. A three-year-old toddler has to have his misery broadcast to the whole world to drive home the ‘we good they bad’ message. We would have got the point without his misery being filmed & shared so please don’t.”

“We would have expected no less from the men in uniform than to rescue the young boy & for that they have our gratitude but we would expect better than for them to film & use a three-year old’s pain the way it’s being done today,” he added.

In a video statement that was also shared on social media, Suhail Ahmad, son of the slain civilian, alleged his father was killed by the security forces.

Suhail said the CRPF personnel “dragged him from his car and shot him dead”.

Khan, who was a contractor, had taken his grandson from Srinagar to Sopore to oversee the progress of a construction work.

Back in Srinagar’s HMT area, Khan’s family and neighbours are in shock and mourning. “My father has been killed and those who killed him should be killed as well. Didn’t they see a little kid along with my father?” asks Khan’s daughter.

The allegations were refuted by SSP Sopore who said the family was not present at the encounter site.

The CRPF spokesperson narrated the incident as: “Today at around 07:30 Hrs, Golf Coy of 179 Bn CRPF reached Model Town Chowk Sopore for Naka, patrolling duties. As the troops were de-bussing from the vehicles to occupy their respective spots of deployment, militants hiding in the attic of a nearby mosque started firing indiscriminately on the troops, resulting in injuries to the four CRPF personnel. Later one of the injured HC Deep Chand succumbed to his injuries. One civilian died on spot in the attack.”

Jammu and Kashmir Apni Party (JKAP) demanded an impartial probe into the killing of Bashir Ahmad Khan. In a statement, a spokesperson of the party said that the family version of the deceased and the circumstantial evidence, prima facie, suggest that "Khan was killed in cold blood".

“The government should order an impartial investigation into the circumstances that led to the killing of a civilian who was on the way to Sopore in connection with his personal work,” the spokesman added. He said only a time-bound and transparent probe into the incident can reveal the veracity of claims made by the family of the deceased. “The security forces should exercise maximum restraint in such situations and ensure that no collateral damage takes place during such incidents,” the spokesperson said.

'Covid-19 Situation Not As Terrible As Predicted A Month Ago': Delhi CM Arvind Kejriwal