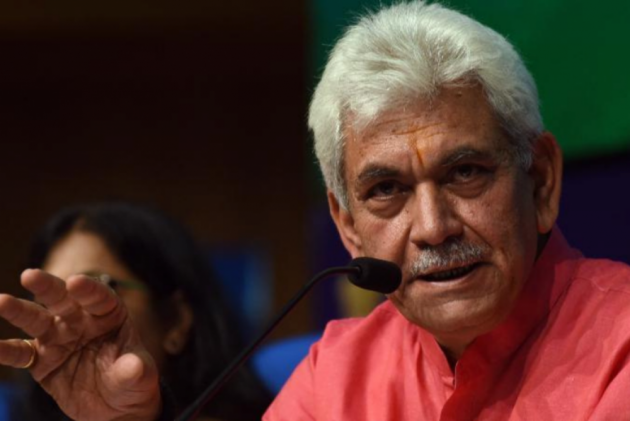 Sinha was addressing the Special Convocation of the University of Kashmir Wednesday.

He said: “while our country is producing CEOs of Microsoft, Google, Adobe, on the other hand, the neighboring the country is pushing our youth on the wrong path.”

“I urge those who are misguided by the enemies to move forward with peace, love and mutual trust, and walk together on the path of development,” he added.

He said the responsibility of building a great nation and a prosperous Jammu & Kashmir rests on the shoulders of youth.

“Bright young minds are the only force capable of building a peaceful, progressive and prosperous community,” he added.

Lt Governor, who is also the Chancellor of the University, said he congratulates the gold medalists and those graduating from the University of Kashmir.

“It was wonderful being amongst very talented young minds, who are determined to take Jammu and Kashmir towards new horizons”, Sinha added.

He said reforms that the national education policy is bringing in the education sector allows the students to learn things that matter and are relevant to an ever-changing world.

“University of Kashmir will play a big role in J&K's knowledge economy and convergence of higher education and skill training, besides fulfilling the aspirations of the prosperous education system and future India,” he said.

“Kashmir University has realigned the courses for developing the culture of innovation & entrepreneurship, creating an intellectually stimulating environment, and taking multidisciplinary research to the international arena,” he added.

“Kashmir University has set up satellite campuses, and because of such efforts, it has been included in the top 50 universities of the country. The Skill Centre run by International Cooperation, Center of Excellence and Kashmir University is also facilitating the youth coming from small Panchayats and towns,” he added.

“On August 15, the country celebrated its 75th Independence Day with great festivity. Now, the golden the opportunity of the next 25 years is before you for the centenary celebrations of Independence and you must resolve to take the nation to a new height of development,” he added.

Sinha awarded gold medals to the students who excelled in academics. A total of 282 gold medals were awarded to girl students against 88 boys during the special convocation.