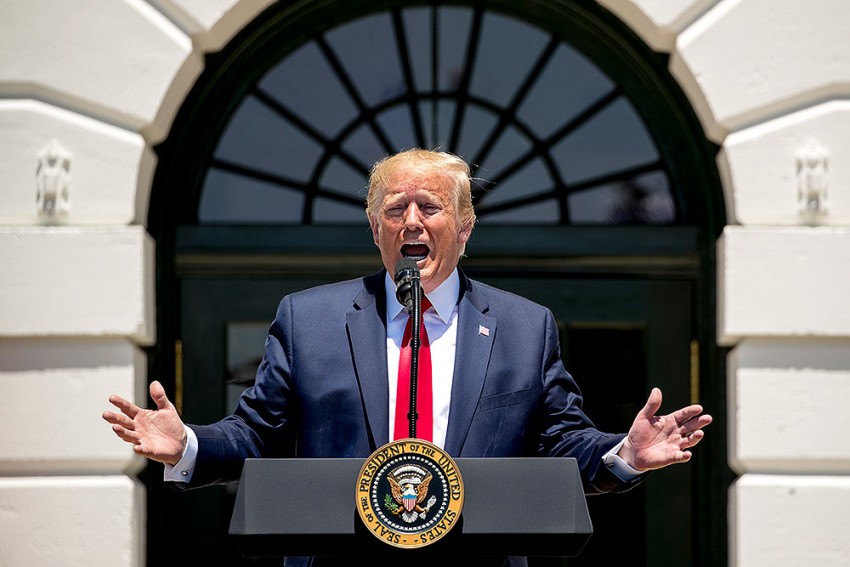 US President Donald Trump speaks during a Made in America showcase on the South Lawn of the White House in Washington. (PTI)
Outlook Web Bureau July 23, 2019 00:00 IST 'Way Off The Mark:' Ex-Diplomats Weigh In On Prez Trump's 'Kashmir Mediator' Remark 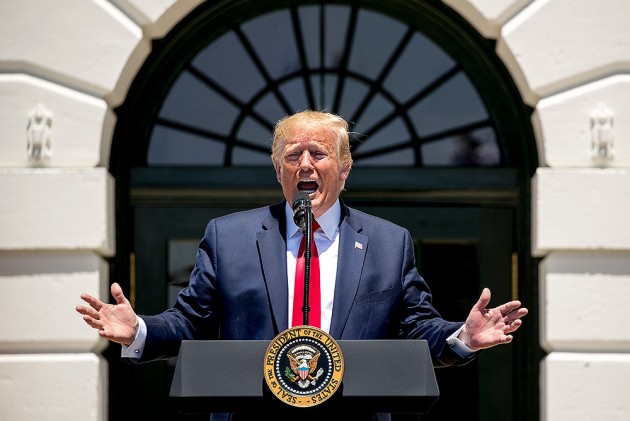 US President Donald Trump's claim that Prime Minister Narendra Modi had requested him to be a "mediator" in the Kashmir issue has been met with raised eyebrows in diplomatic circles, with some even suggesting that it could damage relations between India and United States.

Former US Ambassador to India Richard Verma told PTI, "The President did a lot of damage today. His comments on Kashmir and Afghanistan were way off the mark."

According to Husain Haqqani, a former Pakistan Ambassador to the US, the President would soon learn the complexity of South Asian issues.

"President Trump wants Pakistan's help with a deal on Afghanistan and has dangled the prospect of help with what he thinks Pakistan wants," he said.

"He praised Imran Khan like he praised North Korea's Kim Jong-un. This is his standard procedure in trying to get a deal," he noted.

"Just as he has not got a deal on the Korean peninsula, he will soon learn that South Asia's historical issues are also more complex than fashioning a real estate deal," Haqqani told PTI.

Both Haqqani and Verma were responding to questions on President Trump's remarks that he is ready to mediate between India and Pakistan on the contentious Kashmir issue.

"I was with Prime Minister Modi two weeks ago and we talked about this subject (Kashmir). And he said, 'would you like to be a mediator or arbitrator?' I said, 'where?' (Modi said) 'Kashmir'," Trump said during his talks with Khan.

"I think they (Indians) would like to see it resolved. I think you would like to see it resolved. And if I can help, I would love to be a mediator. It should be....we have two incredible countries that are very, very smart with very smart leadership, (and they) can't solve a problem like that. But if you would want me to mediate or arbitrate, I would be willing to do that," Trump said.

"So all those issues should be resolved. So, he (Modi) has to ask me the same thing. So maybe we'll speak to him. Or I'll speak to him and we'll see if we can do something," Trump said.

Khan welcomed these remarks. "President, I can tell you that, right now, you would have the prayers of over a billion people if you can mediate and resolve this issue," he said.

In New Delhi, The Ministry of External Affairs was quick to deny that Modi ever asked for mediation on Kashmir.

"We have seen President Trump's remarks to the press that he is ready to mediate if requested by India and Pakistan, on the Kashmir issue. No such request has been made by Prime Minister to the US President," MEA spokesperson Raveesh Kumar said.

"It has been India's consistent position that all outstanding issues with Pakistan are discussed only bilaterally. Any engagement with Pakistan would require an end to cross border terrorism. The Simla Agreement and the Lahore Declaration provide the basis to resolve all issues between India and Pakistan bilaterally," Kumar said.

Former State Department diplomat Alyssa Ayres, who is now with the Council for Foreign Relations think tank, said Trump did not come prepared for the meeting.

"I am worried about the President's lack of preparation for his meetings, and his impromptu statements. His statement on Kashmir today (that PM Modi sought mediation from Trump) was categorically denied by the Indian government within hours," Ayres told PTI.

"Diplomacy requires careful attention to detail, to language, and the facts of history. We did not see that today," she said in response to a question.

Nicholas Burns, who served as under Secretary of State for Political Affairs under the Bush Administration and played a key role in the Indo-US civil nuclear deal, said the Indian government has been consistent for many years in rejecting the US as a mediator in the Kashmir dispute.

"Pakistan is in favour. Difficult for the U.S. to consider if Delhi remains opposed," Burns said.