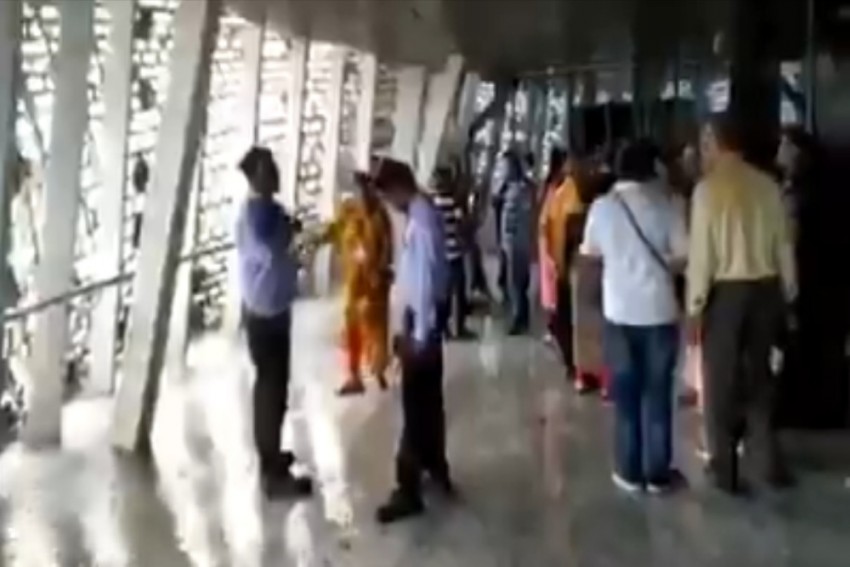 Tourists look at the floor as rainwater makes its way to the viewing gallery of the Statue of Unity.
Outlook Web Bureau June 30, 2019 00:00 IST WATCH | Puddles Of Water On Viewing Gallery's Floor In Sardar Patel's Statue Of Unity 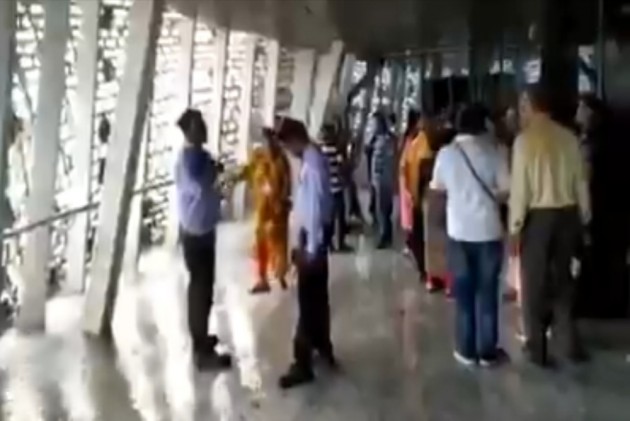 Rainwater made its way to the viewing gallery of the 182-metre tall Statue of Unity in Gujarat which irked many tourists who uploaded photos and videos showing puddles of water on the floor.

"The rainwater has been blown by high-velocity winds inside the viewing gallery It’s by design that it has to be kept open for a better view which tourists can enjoy Water accumulation is being promptly tackled by the maintenance team," the official account of the Statue of Unity tweeted.

The statue, built in the memory of Sardar Vallabhbhai Patel in Kevadiya in Narmada district, is the tallest structure of its kind in the world and was inaugurated by Prime Minister Narendra Modi on October 31 last year.

One rain and it gets flooded, water leaking from the roof and front. Such an expensive statue and they couldn’t even design it to prevent this.. pic.twitter.com/V4pUQxNVS2

"We had come with great hope to see the worlds tallest statue. But we are feeling bad looking at the statue in the rain. It has not rained heavily, and already the main hall and viewing gallery of the statue is filled with water. It is unfortunate," a tourist at the site told reporters.

"The viewing gallery is open with grills on the chest of the statue. The rear side of the gallery is covered by glass. The front view is open as per design. So it is natural that water will enter when it rains," said Narmada Collector IK Patel.

Patel, who is also the chief administrator of the Statue of Unity, added, "There is a channel to dispose of rainwater. But when the wind speed is more, lots of water comes in and house-keeping personnel continuously drain it out. It is not leakage as is being claimed."

Muslim Mother Who Named Her Child 'Narendra Modi' Wants To Change His Name, But...