The missing people include those working at NTPC’s 480 MW Tapovan-Vishnugad project and the 13.2 MW Rishiganga Hydel Project and villagers whose homes nearby were washed away. 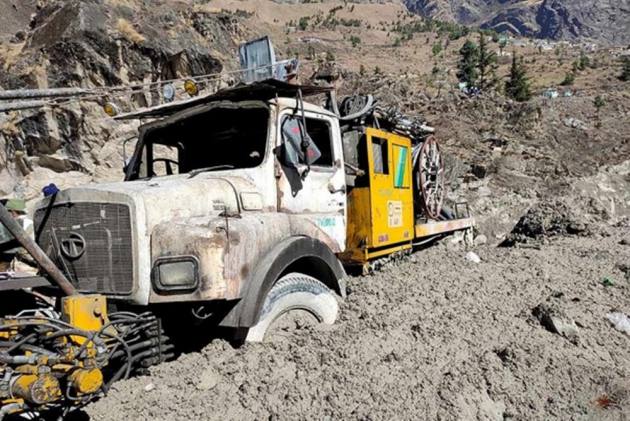 Rescue operations are still underway in Uttarakhand's Chamoli district where flash floods in the Alaknanda river system caused widespread destruction on Sunday. A total of 32 bodies have been recovered while authorities put the official figure of missing persons at 174.

According to PTI, about 600 rescue workers are involved in the operation, two days after the sudden flood in the Alaknanda river system in Chamoli district that was possibly triggered by an avalanche or glacier burst.

With the hours ticking by, fears escalated about those missing since the disaster struck on Sunday morning, according to officials.

Also read: What Is Glacial Lake Burst Flood That Wreaked Havoc In Uttarakhand

The missing people include those working at NTPC’s 480 MW Tapovan-Vishnugad project and the 13.2 MW Rishiganga Hydel Project and villagers whose homes nearby were washed away.

Some family members of the missing workers are camping at Tapovan, waiting for some news about them.

In Parliament, Union Home Minister Amit Shah said the Centre is working in close coordination with the Uttarakhand government.

"Rescue operation to evacuate these people is going on a war-footing and all-out efforts are being made for searching missing persons,” he said.

About 70 missing workers are from Uttar Pradesh, an official said in Lucknow. Among them 34 are from Lakhimpur Kheri district alone.

The ITB alone has deployed 450 personnel in the rescue effort, according to Shah’s statement.

The workers have been trapped in the 12-ft-high and about 2.5-km-long 'head race tunnel' (HRT).

"The height of the accumulated slush has reduced more. ITBP personnel are waiting to enter as soon as any movement deep inside the tunnel is possible," he said.

A senior official added that the rescuers have not been able to make any contact with those stuck inside but are hopeful for "signs of life".

Uttarakhand DGP Ashok Kumar said efforts are on to push through the debris and expressed hope that a breakthrough could be made soon.

The district administration is also searching for the missing from areas along the Alaknanda river.

Relief is being distributed by helicopters among people at 13 villages cut off due to the washing away of a bridge in the avalanche at Malari. The total population of these villages is around 2,500, officials said.

On Tuesday, Uttarakhand Chief Minister Trivendra Singh Rawat undertook an aerial survey of the affected areas, visited the ITBP hospital in Joshimath, about 300 km from Dehradun, and met the 12 workers who were rescued from a small tunnel in Tapovan on Sunday evening.

He also visited Lata and Raini to meet residents of the disaster-hit villages.

The priority is to get to those trapped inside the tunnel and save as many lives as possible, he said.

Additional heavy machines could be pressed into service to expedite the process of clearing the tonnes of debris inside the tunnel, blocking the path of rescue personnel.

The clearing of slush and debris is a painstaking exercise but the multi-agency rescuers are there in large numbers and taking turns to dig in deeper with the help of heavy machines, officials said.

As the temperature dipped to freezing levels at the site, awash with slush, silt and debris, bonfires were lit at multiple locations to keep the rescuers warm.

The rescuers are carrying tall wooden planks which are being used by them to wade in through the slush and will later also help create a platform to pull out the trapped people using ropes.