Hundreds of farmers and locals from Bijnor and surrounding areas started pouring in at the ITI Ground on tractors and other vehicles for the mahapanchayat in Uttar Pradesh's Bijnor district. 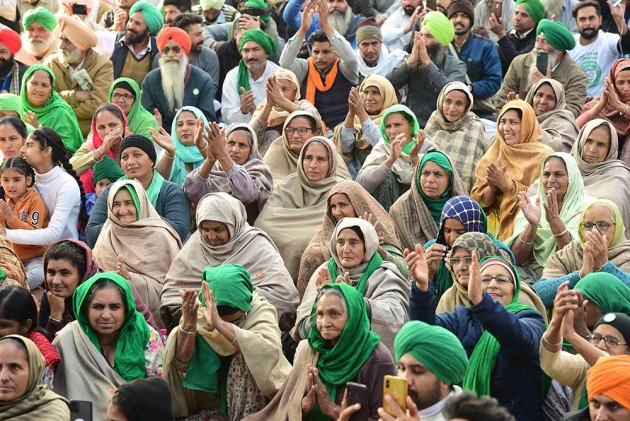 While protests are raging at Delhi borders against the Centre's contentious agriculture laws, farmers in Uttar Pradesh’s Bijnor have gathered for a farmers' mahapanchayat. This is the fourth such congregation in the region in as many days.

Earlier, mahapanchayats had taken place in Muzaffarnagar, Mathura and Baghpat districts, with each such congregation witnessing a turnout of thousands of people and resolving to extend support to the ongoing stir at Delhi's borders.

Hundreds of farmers and locals from Bijnor and surrounding areas started pouring in at the ITI Ground on tractors and other vehicles for the mahapanchayat that started at 11 am with several regional farmer leaders in attendance.

Bharatiya Kisan Union national president Naresh Tikait, whose union is protesting at Ghazipur on the Delhi-Uttar Pradesh border for over two months now, was said to attend the mahapanchayat, according to “munaadis” (beat of drums for public announcements) done in several villages and towns preceding the event.

Strictly a farmers' show, the mahapanchayat although will have Rashtriya Lok Dal's (RLD) vice president Jayant Chaudhary in attendance with several supporters of his political party, which holds a sway in western UP.

“Chalo Bijnor!,” tweeted Chaudhary, who earlier spoke at the Muzaffarnagar mahapanchayat too.

Thousands of farmers have been protesting at the Delhi borders with Haryana and Uttar Pradesh, demanding a rollback of the Farmers' Produce Trade and Commerce (Promotion and Facilitation) Act, 2020; Farmers (Empowerment and Protection) Agreement on Price Assurance and Farm Services Act, 2020; and the Essential Commodities (Amendment) Act, 2020.

The protesting farmers have expressed the apprehension that these laws would pave the way for the dismantling of the minimum support price (MSP) system, leaving them at the "mercy" of big corporations.