Kappan, along with three others, was arrested on 5 October 2020 while travelling to Uttar Pradesh to report the alleged gang-rape and killing of a 19-year Dalit woman in Hathras.

He was lodged at Mathura Jail since his arrest till last week, when he was shifted to AIIMS for medical treatment.

Kappan’s wife, who has travelled to Delhi to visit him has reportedly not been granted permission to meet him at AIIMS.

In mid-April reports had emerged that Kappan had tested positive for Covid-19 but authorities informed the Supreme Court, last week, that he had not contracted the virus.

Stating that Kappan’s family is not aware of his present medical condition or the kind of treatment he has been receiving at AIIMS, Rahyanath has written to the Mathura Court and the Chief Justice Of Allahabad HC seeking permission to meet him. 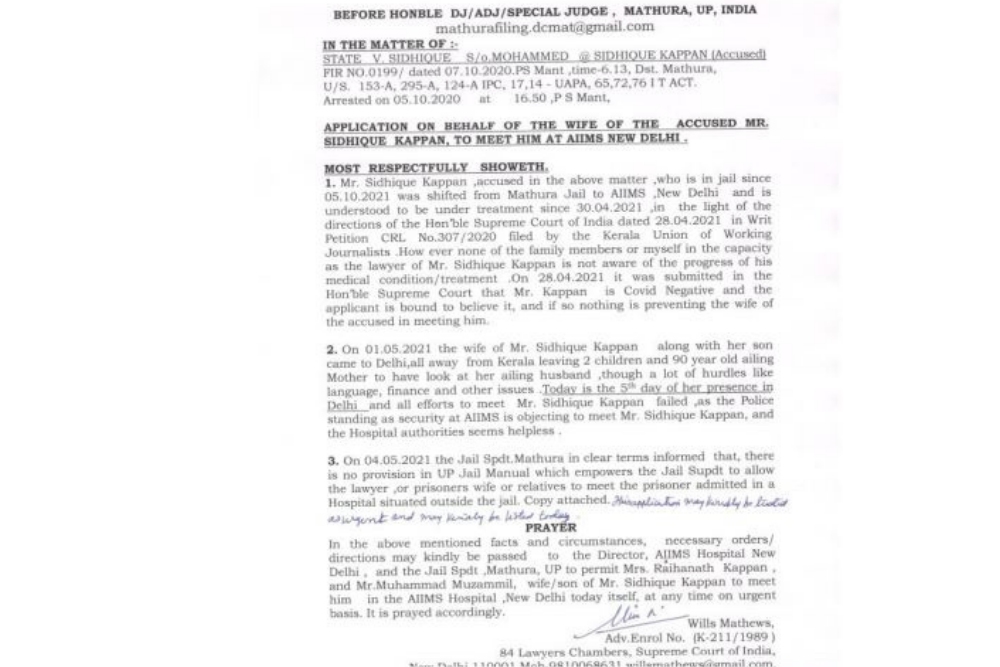 Prior to this, the Editors Guild of India had condemned the manner in which Uttar Pradesh Police was treating Kappan.

“His (Kappan’s) wife has alleged that her husband has been tied to a bed and is neither able to take food nor access toilet, while undergoing treatment at a Mathura Hospital for Covid-19. This is shocking and should stir the conscience of the nation that a journalist is being treated in this cruel manner and being denied basic rights,” the EGI said in a press statement.

Meanwhile, last week, the top court had granted liberty to Kappan to approach an appropriate forum challenging his arrest or for any other relief. However, the SC had said that the journalist will be sent back to Mathura jail after recovery.