The TMC would field one candidate for the Andaman and Nicobar Islands, and Haasan said his party would extend full support to him. 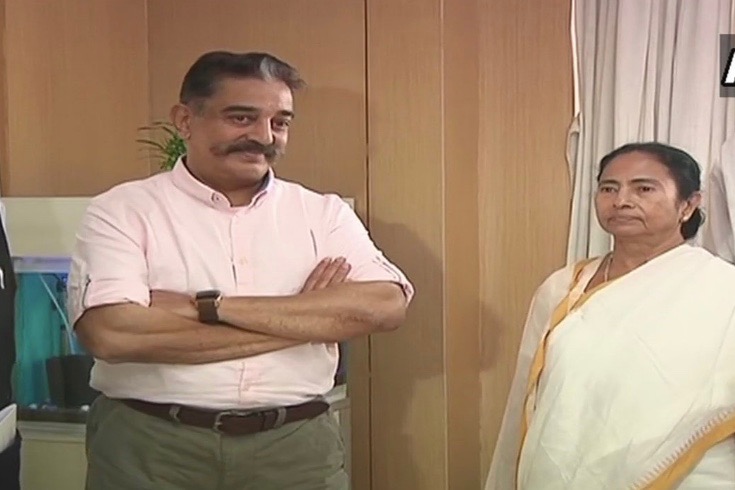 Haasan, who flew down to Kolkata this afternoon, had an hour-long meeting with Banerjee before the decision was announced.

The TMC would field one candidate for the Andaman and Nicobar Islands, and Haasan said his party would extend full support to him.

"We have formed an alliance with Kamal Haasan's party for Andaman," Banerjee said.

Kamal Haasan, Makkal Needhi Maiam after meeting West Bengal CM: Meeting was excellent we are proud to say that Makkal Needhi Maiam is an ally of TMC in Andaman. We hope this relation evolves in future. I'm going to campaign for their candidate (in Andaman). pic.twitter.com/gaZSj3TLQZ

"We are proud to say that Makkal Needhi Maiam is an ally with the Trinamool Congress for Andaman... We hope this relationship evolves in the future," Haasan said after the meeting.

The Trinamool has fielded eight-time Congress MP Manoranjan Bhakta's grandson Ayan Mondal as its candidate in the Andaman and Nicobar constituency.

"We have formed a political alliance (with MNM). Our candidate in the Andamans is Manoranjan Bhakta's grandson Ayan Mondal. Kamal Haasan has extended his support to us and he will go there on April 6 to address a public meeting," Banerjee said after her meeting with the south Indian actor at the state secretariat, Nabanna here.

"From our party, state Minister Sujit Bose and other leaders will also be there. It is a good opportunity for the people of Bengal and Tamil Nadu to work together. Especially, someone like Kamal Haasan has very good credentials... not just as a politician but also as an actor. Everybody knows his name. His idea of rendering service to the people is very good and unique. We are grateful to him for his initiative," she said.

Haasan himself said the focus of his meeting with Banerjee has been the Andaman and Nicobar Lok Sabha seat. However, he refused to comment on whether his party will be a part of the anti-BJP alliance in the coming polls.

"Right now the focus of the discussion (with Banerjee) is the Andamans. I am a small regional party. So I am thinking about my region and Bengal because I love Bengal. We will take things forward step by step," he said.