Republic Day In The Time Of Covid

The 72nd Republic Day celebration is the first major public event in India since the pandemic struck. 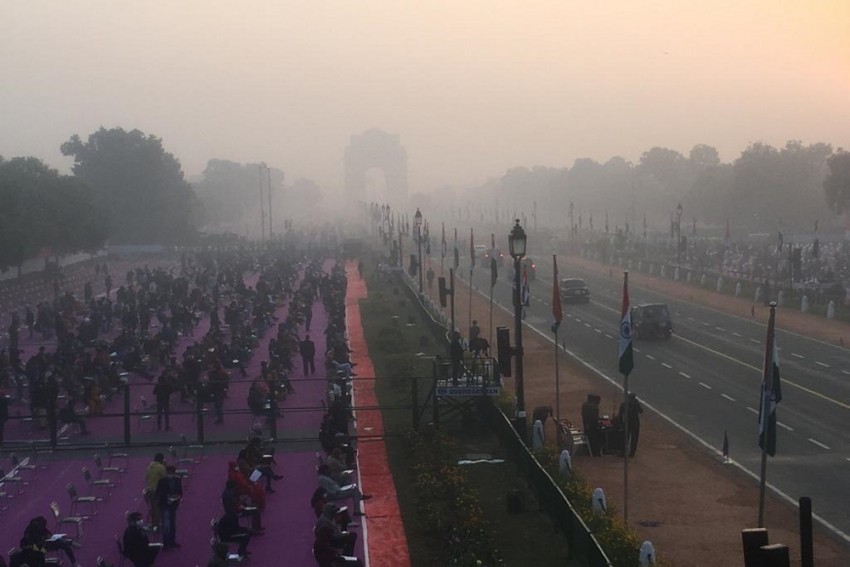 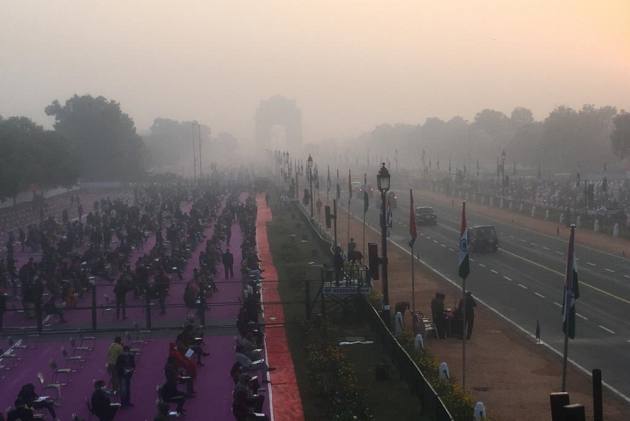 India's 71st Republic Day has its sight in the annals of history -- it will be singled out for its novelty. The pandemic and farmers' unrest form the background of the celebration, which will also be the first major public event in the times of coronavirus.

This is also the second year that celebrations in the national capital are going to take place under the pall of protests. Last year, the agitation against the Citizenship Amendment Act (CAA) marked the days preceding and succeeding January 26.

Unlike previous years, the Republic Day celebrations are scaled down this year. The usual festivity and fervour will be traded for restrictions and protocols.  Here's how the celebrations are shaping out to be: 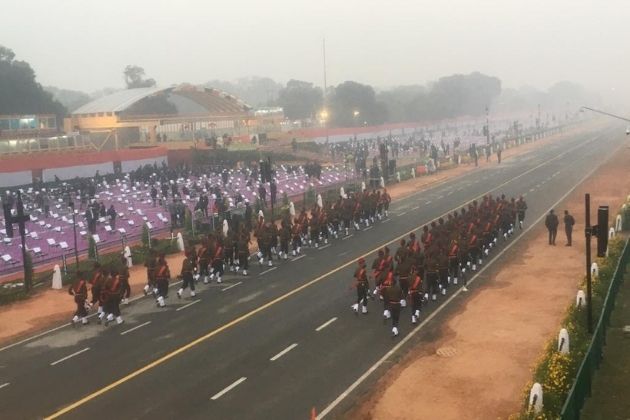 The time-honoured parade will anchor the celebrations. It will be marked by flag hoisting ceremonies and marches by armed forces and school children are held in different parts of the country. In Rajpath in New Delhi, the grand parade will put on show an eclectic mix of India's heritage and military valour.

The ceremony commenced with Prime Minister Narendra Modi's visit to the National War Memorial in the morning. The leader unfurled the flag followed by the national anthem with a booming 21-gun salute. The parade commenced with President Ram Nath Kovind taking the salute.

This year, with the modification of the pandemic, things will be different in terms of the number of spectators, the size of marching contingents and other side attractions.

The number of spectators this year will be 25,000, a reduction from last year's 1.25 lakh spectators. The size of marching contingents has also been reduced from 144 to 96. Additionally, the festivities will be restricted: for instance, the gravity-defying stunts by motorcycle-borne men will not be performed.

The parade will also be shorter this year. This time the parade will end at National Stadium and not the Red Fort. However, one will get to see tableaux performance at Red Fort. 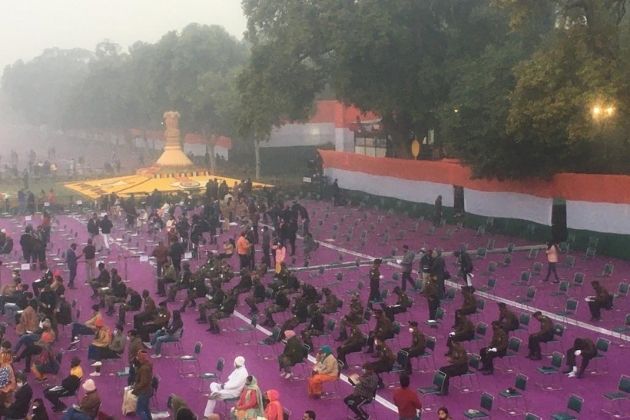 The parade will witness a show of a total of 32 tableaux: 17 from states and union territories, six from the Defence ministry and nine from other ministries and paramilitary forces. In a first, the Union Territory of Ladakh will be participating as well. Located at Hanle near Leh, it will showcase the Indian Astronomical Observatory, one of the world’s highest sites for optical, infrared and gamma-ray telescopes.

In Uttar Pradesh's presentation, a replica of Ram temple will be shown along with various depictions from the Ramayana epic.

India is currently celebrating the Swarnim Vijay Varsh -- the Golden Jubilee year -- in honour of the country's victory over Pakistan in the 1971 war that led to the creation of Bangladesh. The Navy's tableau displayed models of Indian naval ship (INS) Vikrant and naval operations that were conducted during the 1971 India-Pakistan war.

This year, a 122- member contingent from Bangladesh will take part in the rally. This is the third instance -- after France in 2016 and UAE in 2017 -- of a military contingent from a friendly foreign nation participating in the parade.  The Bangladesh contingent will showcase the legacy of the legendary Muktijoddhas of Bangladesh, "who fought against oppression and mass atrocities and liberated Bangladesh in 1971," according to the Defence Ministry.

Looking at the skies, the Indian Air Force is gearing to put up an impressive show. 38 Indian Air Force aircraft and four Indian Army planes will be in fly-past. For the first time, Rafale fighter jets -- India's first acquisition of fighter equipment in over two decades -- will be participating in the Republic Day celebration. The display will also include Sukhoi-30 MKI fighter jets, T-90 tanks, and the Samvijay electronic warfare system to display India's military prowess.

School children performed folk arts and crafts displaying skills and dexterity handed down from generations. Bajasal, a folk dance from Kalahandi in Odisha, the Fit India Movement and Aatmanirbhar Bharat were also displayed on the Rajpath.

The simmered down festivities at Rajpath are not the only indicator of Covid's impact on Republic Day. Children are observed the Day in a mellow fashion, with entry at Rajpath restricted and no celebrations at school.

School children, who were in regular attendance at the Republic Day parade every year in large numbers, found themselves confined to their homes this time, hooked to their TV sets and watching the celebration at a distance.

They did not get the opportunity to dress up and take part in cultural celebrations as schools continue to be closed due to coronavirus. Few schools had organised online essay writing competitions on Republic Day and activities such as flag colouring for primary classes.

Right after the parade at Janpath, protesting farmers are expected to take out a tractor parade to register their protest against the central government's agriculture reforms. 41 farm unions will reportedly take part in the rally.

Hundreds of women farmers are also expected to drive tractors.

Farmer leaders have also asked those participating in the parade to come prepared with enough ration supplies for 24 hours and ensure that the rally remains peaceful.

"No one should carry any weapon or drink alcohol. Banners carrying inciting messages are not allowed," a farmer leader said.

The following routes have been approved by the Delhi Police —

The union said around two lakh tractors are expected to participate in the rally. A thousand others have reportedly been stopped from reaching Delhi or have been stuck in traffic jams on Yamuna Expressway, Sonepat, Singhu border and Bijnor.

The rally will be carried out amid tight security -- one of the many riders based on which the Delhi police gave the nod. For now, farmers have been allowed to enter the national capital, with barricades and other security arrangements removed and. Later, they will return to their destinations after covering a “respectable” distance, police had said.

The Delhi Police have also spoken to their counterparts in Haryana and Uttar Pradesh regarding the arrangements. 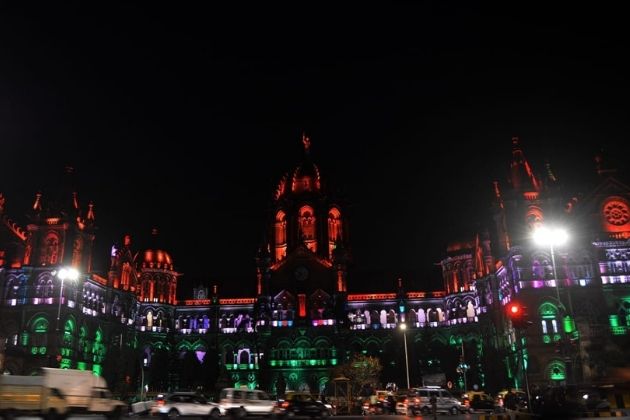 Ahead of the Independence Day celebration, Chhatrapati Shivaji Maharaj Terminus (CSMT) illuminated in tricolour on Monday. 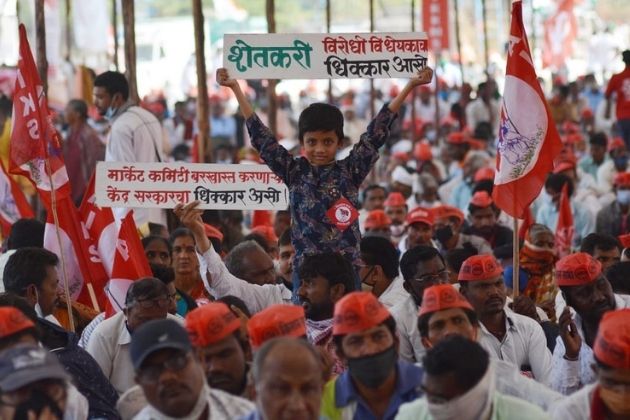 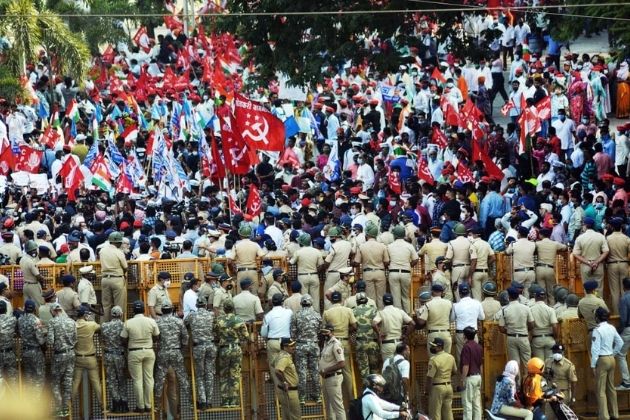 More than 6,000 security personnel have been deployed at Rajput to maintain vigil and facial recognition systems have also been set up at vantage points for suspect identification, Deputy Commissioner of Police (New Delhi) Eish Singhal said.

The security personnel are keeping a hawk-eyed vigil over Rajpath, where President Ram Nath Kovind and Prime Minister Narendra Modi will be celebrating the occasion along with other dignitaries and thousands of people.

Checking and frisking at Rajghat will be done by personnel in PPE kits, with mask and face shield, keeping in line with Covid-19 protocols, the official said.

A five-layer security cover has been deployed in and around the city to maintain law and order, a senior police officer said.

"We have 140 CCTV cameras on the Republic Day parade route and along the enclosures. We have identified and set up facial recognition systems at 30 spots on Rajpath from where the public would enter.

"This system is fed with a database of nearly over 50,000 people, including that of suspected terrorists, criminals and anti-social elements," said another senior police officer.

Following Covid protocols, only 25,000 people will be allowed to attend the ceremony at Rajpath as opposed to over one lakh spectators who usually attended the event every year, he said.