The Supreme Court had on Tuesday reserved its judgment on the contempt of court case against Prashant Bhushan. 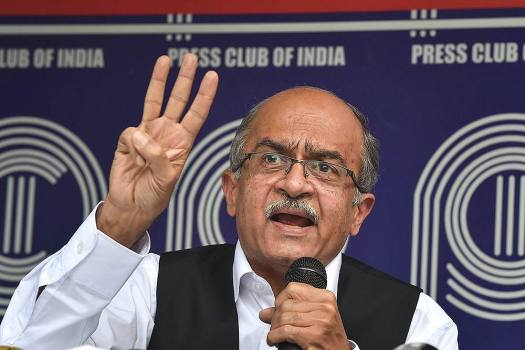 The Supreme Court will Monday pronounce the sentence on a contempt case against Prashant Bhushan for his tweets against the judiciary and Chief Justice of India SA Bobde.

The top court had on Tuesday reserved its judgment on the contempt of court case against Bhushan who was convicted in the case earlier this month.

The Court had granted Bhushan the opportunity to 'think over' his stand of not expressing regret over his tweets against the judiciary.

On August 20, the top court had granted time till August 24 to Bhushan to reconsider his “defiant statement” refusing to apologise and tender “unconditional apology” for contemptuous tweets against the judiciary and rejected his submission that quantum of punishment be decided by another bench.

The top court had analysed the two tweets of Bhushan posted on the micro-blogging site on June 27 on the functioning of judiciary in past six years, and on July 22 with regard to Chief Justice of India S A Bobde.

"In our considered view, it cannot be said that the tweets can be said to be a fair criticism of the functioning of the judiciary, made bona fide in the public interest," it had said.

Amid Border Standoff With China, India Likely To Withdraw From Multilateral War Game In Russia