Somnath Sow and Falguni Pan of VB Students' Unity, a platform comprising of different left-wing student outfits alleged that they were placed under house arrest on Saturday 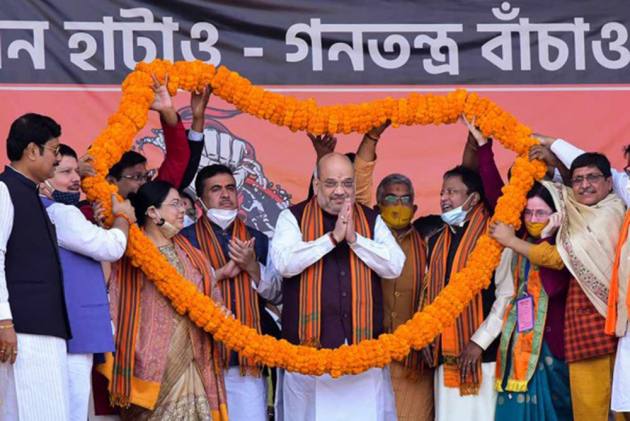 Two student leaders belonging to one left-leaning platform at Visva-Bharati University (VBU) in Santiniketan alleged that they were put under house arrest on Saturday night, in an attempt to prevent students from staging any demonstrations ahead of Union Home Minister Amit Shah's visit to the quaint varsity town founded by the university founder Rabindranath Tagore's father, Debendranath.

Santiniketan holds a high place in Bengal's cultural excellence and pride. The authorities at the VBU, the century-old, Centre-funded university of which the prime minister is the chancellor, has of late faced repeated charges of ‘saffronisation’.

However, the students have alleged that it was the state administration that put them under house arrest.

What About Jay Shah? TMC Guns For BJP In Nephew Tit-For-Tat

Shah arrived in Bengal on Saturday when he addressed a public rally in West Midnapore district. Shah has a set of events scheduled on Sunday in Bolpur and Santiniketan.

"We staged a demonstration on the campus on Saturday evening and burnt the effigies of prime minister Narendra Modi, Amit Shah, and our vice-chancellor Bidyut Chakraborty. Following this, some of us were summoned to the Bolpur police station where an additional superintendent of police wanted to know about our programmes on Sunday. We did not divulge anything. At night, two cops in civil dress were posted outside my house in Bolpur," said Sow.

"Since its really cold out here, my family asked the policemen to stay at our home instead of standing outside. They are still at our home," Sow said on Sunday afternoon.

He is a member of the Students' Federation of India (SFI), the student wing of the Community Party of India (Marxist).

The story of Pan, who is from another leftist organisation, was similar. He lives at a rented place near the university campus.

In a statement, Pan said, "The VC is a cadre of the BJP and is leading the saffronisation of the campus. Soon after burning the effigies of Modi, Shah and Chakraborty, the administration started pressurising us for not taking any programme on Sunday. The state administration put us under house arrest at the behest of the varsity authorities."

VB spokesperson and assistant registrar Anirban Sircar said the authorities had no knowledge of anything about students being put under house arrest. "I know nothing and did nothing with this regard," he said.

Several attempts to reach out to the Birbhum district administration's top officials failed. However, one police officer in the district confirmed that 'precautionary measures' were taken to 'avoid untoward incidents' during the home minister's visit.

"The state administration is already battling with the Centre over the attack on J P Nadda's convoy. The administration did not want to complicate the matter by allowing law and order problems during the home minister's visit," the police officer said.

BJP national president Nadda's convoy came under attack from alleged TMC supporters earlier this month, following which the union ministry of home affairs ordered the transfer of three IPS officers. The state government has refused to abide by the order and the matter may be dragged to the court.

In a statement issued on Sunday about the house arrest, the SFI's national president V P Sanu and general secretary Mayukh Biswas said, "Mamata Banerjee's state police put left student leaders Somenath Sow and Falguni Pan under house arrest... no amount of intimidation is going to stop our struggle to protect the freedom of expression in educational institutions."