A 12-year-old girl was sexually assaulted by an unidentified man, who also hit her face and head with a sharp object at her home in west Delhi's Paschim Vihar area. 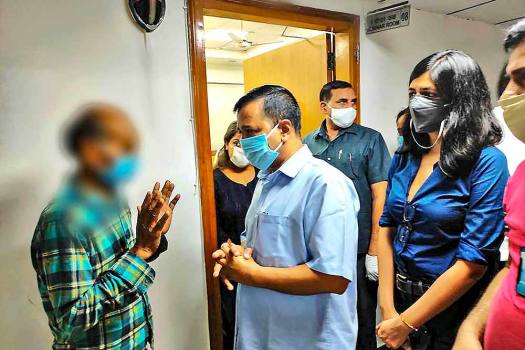 Delhi Chief Minister Arvind Kejriwal on Thursday said he was shaken to the core after learning about the sexual assault on a 12-year-old girl in the national capital.

"The incident of a violent incident with the 12-year-old girl has shaken me to the core," Kejriwal said in a tweet.

Kejriwal visited the hospital on Thursday where the survivor is admitted. He said he has also talked to the police to expedite the probe into the matter.

Kejriwal also announced a compensation of Rs 10 lakh to the family of the rape survivor.

A 12-year-old girl was sexually assaulted by an unidentified man, who also hit her face and head with a sharp object at her home in west Delhi's Paschim Vihar area, police said on Wednesday.

The girl, who has injury marks on her body, is currently admitted in a city hospital where her condition stated to be serious, they said.

Police are questioning the neighbours and scanning CCTV footage of the nearby area to identify the accused, they added.

Police said they received information about the incident on Tuesday evening. The neighbours saw the girl lying in a pool of blood and informed the police and her parents.

The girl was taken to Sanjay Gandhi Memorial Hospital. After preliminary treatment, she was shifted to AIIMS for further treatment.

Police have registered a case under relevant sections.

Preliminary investigation revealed that the parents of the girl were at their workplace and the victim was alone in the house when the incident took place, police said.

The Delhi Commission For Women (DCW) has also issued a notice to the police in connection with the incident and has sought a detailed action taken report in the matter by August 8.

The panel said the horrific incident of rape was reported from Paschim Vihar on August 4.

"Reportedly, the girl was brutally raped and then the culprit(s) tried to kill her. Presently, she is fighting for her life in AIIMS, Delhi. It is reported that she was attacked with blunt objects and has injuries all over her body. This is a very serious matter," the panel said.

The DCW has sought a copy of FIR. It has also sought to know whether the accused have been arrested in the case.